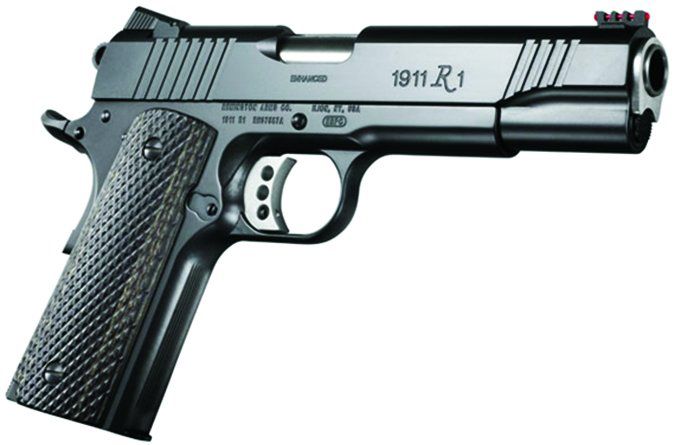 I think the Remington R1 Enhanced Threaded Barrel featured in this article may not actually be the same model you tested and referenced in the past. Remington bought up the out-of-business carcass of Para, aka Para Ordnance, and is now selling 1911 versions of that company’s models with the same name as the (very good, actually) R1 1911s it has been selling for the last 10 years or so with its own designs. — Scotty

Hey Scotty: Perhaps you’re right, and I can’t be sure since our previous R1 test guns are long gone now. But a close external comparison of the full-size images then (top) and now (bottom) are remarkably similar. Those can’t look inside the gun, of course. — Todd Woodard

I just saw a blip somewhere online that Winchester has introduced a new straight-wall hunting cartridge, which is required where I deer hunt. Do you know anything about it? Thanks. — Willie T.

The Sporting Arms and Ammunition Manufacturers’ Institute (SAAMI), the firearms and ammunition industry’s technical standards-setting organization, has accepted a new cartridge and chamber standard, the 350 Legend (350 LGND), introduced by Winchester Ammunition. Winchester Ammunition is addressing a rapidly growing market segment, “straight-wall-cartridge-compliant” deer-hunting states. A growing number of states that previously restricted deer hunting to limited-range slug guns or muzzle-loading firearms are now allowing rifles chambered in straight-walled centerfire cartridges, many of which originated as handgun-cartridge designs. It’s shown above at actual size, with a minimum OAL measurement of 2.125 inches. — tw

Re “We Test Inside-The-Waistband Holsters for $50 and More,” February 2019

I would like to request a comparison test between leather and Kydex handgun holsters as to which is harder on the finish. I know there are a lot of variations of finish, quality of leather, etc., but I would like to know if a typical Kydex (Galco King Tuck, Alien Gear Cloak Tuck) or leather holster for my SIG, Glock, Springfield XDM, or Ruger Black Hawk in the factory standard blued (non-stainless) finish is going to show more or less wear and tear over time. While I understand appearances aren’t everything, when I invest hundreds of dollars on something, I like to try to minimize unnecessary degradation of the item. — Jon

This is a question that has come up from time to time. I think Kydex does wear more on the high-bearing surfaces, and, of course, most old cop revolvers have muzzle wear from leather. I will do this on a long-term-test basis, and I think it will be immensely interesting to many people. I’ll include before-and-after photos of the handguns initially and then after 1,000 draws over time. Will use Kydex, leather, and lined-leather holsters. When I am done, I will be pretty sharp on the draw! — Bob Campbell

Greetings, Gun Tests Editor: Thanks for your independence, without favoritism to make/model/brand. In this issue, you responded to a subscriber (Greg) noting that you’d consider writing a piece on 45-70 rifles. I particularly like the 45-70, especially in lever guns. Although there are fine modern single-shot 45-70 rifles by Ruger and Uberti, I think your article would be of interest to most people if you focused on lever guns capable of firing modern factory ammo. If you do, please know that I consider the Browning Centennial 1886 to be the finest 45-70 lever gun made (I have one), as it was a direct copy of John Browning’s original 1886 design. However, any real lever gun article of worth must include a candidate from Henry; Henrys are fine rifles (I have one of those, too). Additionally, you will need to include Marlins, and again to be an article of worth, you will need to address the great JM Marlins (I have much experience with these) as well as the current production (lower grade, in my opinion). I suppose you could include some of the Italian 1886 copies, but, instead, and to help trim your rifle evaluation to 1 fewer rifle, you could call your article “A Tribute to American-Made Lever-Action 45-70 Rifles,” or something like that. As you already know, the 45-70 is a versatile, powerful cartridge that is easily reloadable by virtue of its straight-wall design. Not many cartridges can say that, especially with well over 100 years of storied experience. Now, I will look forward to your article.

Let me say a bit more. You recently published a nice article on Italian lever guns for cowboy shooting, but, gee, those guns use such tiny bullets. I was surely disappointed that your article did not include a Henry; I have one of those too in 357 Magnum, an octagonal-barrel 10-shot version. But now to my point, which is that I believe that modern 45-70 lever guns are the ideal American deer rifle. They are quite accurate to 200 yards, which is further than most deer are taken. They carry tremendous power, sufficient for any North American game. And, lever guns are an American invention, with a Wild West mystique that has inspired gun enthusiasts for well over 100 years. I could go on. I hope I’ve convinced you that there is a real need for you to write this article. Yours in 45-70s. — Paul

Hey Paul: You’ve made a compelling case. We’ll factor in your ideas as we go further. Thank you for taking the time to write me. We have tested lever-action 45-70s in the past. In the September 2014 issue, we looked at the Marlin Model 1895GS 45-70 Government, saying, “We liked this little rifle quite a bit. The action was slick, and it fed and ejected positively every time. But the trigger was too heavy, and we’d prefer a better rear sight.” Of the Henry Repeating Arms Lever Action Rifle H010, we reported, “Once again, we found ourselves liking this rifle a whole lot. We suspect we’d take a file to the tall front blade if we owned this and had found that our chosen ammo printed too low. But we’d have to proceed with caution because the front-sight blade and base are integral with the front barrel band. The trigger pull was very much okay, and the action, feeding and ejection were all smooth and positive. Unloading this rifle was easier than most tubular-magazine rifles, and a bonus was that the bolt could be easily taken out to clean the rifle from the rear. An instructive video came with the rifle explaining the entire takedown procedure. The workmanship and finish were beyond fault. The accuracy could be improved, we’re sure, with a scope or smaller aperture if needed. Pretty much everything here was done just right, and the cost was reasonable.” The winner was the Winchester Model 1886 Limited Series 45-70 Government. We said, “This was a fine rifle in all respects. It cost more than the other two, might be harder to find, and was not in the same class as them for portability. The 1886 was never designed to be a handy guide’s rifle. It felt great, looked great, and would provide many years of fun shooting along with ample pride of ownership to anyone lucky enough to find one.”

Gentlemen, I saw in a previous issue that you were thinking of doing an article on hearing protection. I have been meaning to write to you on this subject, but it kept slipping my mind. You know, things you mean to do when you are on the computer but forget when you get there. Anyway, I am a range safety officer and have to wear hearing protection for long periods. So comfort is a big concern of mine. I have found only one set of muffs that were suitable, but they were not electronic, which is a must in this case. Also, because I need reading glasses, I am interested in how well they work with eyewear. I would appreciate it if these two factors can be incorporated in your evaluations. Finally, have you considered testing the splattering type of targets? I have not found one that is really effective in the smaller, .223, calibers at distances of 100 yards or more. They work fine for 30-calibers and above, but are not very effective below. — John

We can certainly listen to your suggestions on the hearing protection test. Our experience with the splattering targets has been that they are much better than plain paper in terms of downrange spotting, irrespective of caliber. We do see the brighter-backed hole edges better than other colors. For example, here are two targets from a recent smallbore rifle test. The paper target at left is much more difficult to read through a scope at 50 yards than the Birchwood Casey Big Burst Target at right. But the fluorescent stickers on paper improve spotting, too. Hope this helps. — tw