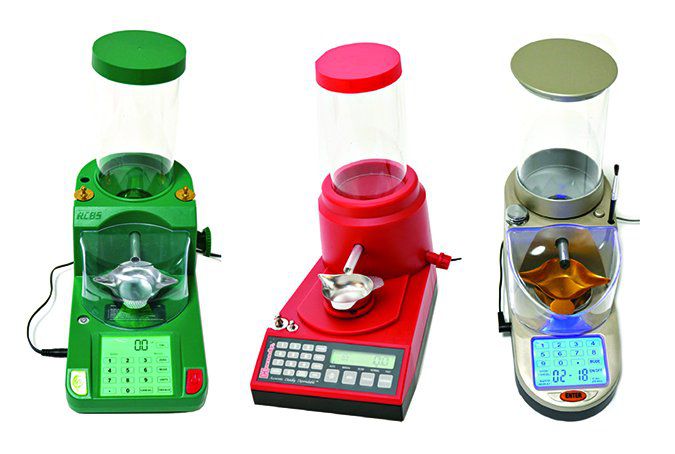 I want to thank you for publishing the article on automatic powder dispensers. Although I think you may catch some flack for those who think Gun Tests should just test guns, and maybe ammo, I find that articles such as these are very helpful and informative for those of us who pursue reloading, gunsmithing or other peripheral “hobbies.”

Had I not already purchased the Hornady Auto Lock-N-Load, I would probably follow your recommendation for the RCBS model on the basis of its accuracy and intuitive operation. I say this, because the other drawbacks and problems you note with the Hornady reflect my experience. But once you have used the Hornady, some of the problem settings are less confusing. The manual also includes several instructions on how to correct the performance in terms of dispensing and trickling speeds. Other than changing the speed, I have not had to make more complex adjustments. That being said, the RCBS Chargemaster Lite seems to address those factors, as well. You describe the problems with dispensing rod-versus ball-shaped powders very well. There is an internet fix for this involving cutting a plastic straw and fitting it within the dispensing tube. I have not tried this yet. Finally, as you note, using one of these machines really makes the process of measuring powder much more efficient, and it can perform this task while you charge the cartridge cases and seat the bullet. It’s a great time saver, and if you’re content with an accuracy of the dispenser to 0.1 grain, then I wouldn’t wait to purchase one of these. — James

Just reviewed your gun test of the Rock Island Armory handgun. I purchased my Rock Island pistol new about a year and half ago. In 9mm, the pistol is great! I have used it successfully in combat/practical pistol training with my local gun club. I had the same experience with the 22 TCM cartridge as your testers — two stuck cases while firing 40 rounds. I sent the pistol to the factory for warranty repair. They returned the pistol, verified my complaint, tuned the extractor, and test fired. They recommended using light oil on the extractor, not grease (I had not used grease). During the next 20 rounds, I had two stuck cases. I tested the extractor by closing the slide on the fired/stuck case and by using herculean gorilla strength, the extractor successfully removed the fired/stuck case. Doesn’t appear to be the extractor. I obtained a 50-caliber copper brush and thoroughly cleaned the chamber, then I applied gun oil to the chamber surface. I fired approximately 25 rounds with no malfunctions before I ran out of ammunition. Traveling across Missouri, I found a shooting range in St. Louis County. I have three magazines for my Rock Island handgun, so I loaded all three with 17 rounds each of the 22 TCM cartridges. Fired 51 rounds with no malfunctions, no stuck cases. Before I fire it again, I’ll use the wire brush/oiling procedure and see if I can prevent having any more stuck cases. Also, I should mention I travel all summer in my motorhome, and during my stops, I tried to find 22 TCM cartridges with no luck. That suggests an availability problem your readers should consider. — Phil

I just received the August issue with the tests for the 380 ACPs. Since you have included an older steel Walther, I would like to suggest the carry 380 that I use. The SIG Sauer P232 in 380 ACP has very good function, and I checked the trigger-pull weights: Double action is 9.25 pounds and single action is 3.75 pounds. I personally prefer a SA/DA firearm over a 1911 style. Unless someone has practiced with or has used 1911s all the time, the owner may forget to set the firearm to Fire mode when in an emergency. The SIG is quite accurate because it has a fixed barrel and decent sights, if you really have time to use sights in an emergency. The size and weight are good. You might think about including this senior but excellent pistol. — Bill

Hey Bill: Thanks for the note on the P232. It has been a while since we last tested it in the June 2010 issue, where it earned a B grade. — Todd Woodard

I came across a 2008 edition of your magazine and recalled how much I enjoyed reading it. Someone at work had a subscription and would leave it laying around. Having discovered it again, I was thinking about ordering a subscription of my own. However, it looks like you only have an online version. Is that the case, or can I get a hard copy delivered to my door? Thank you for your time, and thank you for such an informative magazine. — Frank

Thank you, Frank. We offer mail, mail plus online, and online-only subscriptions right here. I look forward to hearing about some tests you want us to consider. — tw

I was reading the reply to the article on self-defense insurance and remembered what happened to a good friend of my brother’s back in the 1950s. He’d had an operation on his sinuses and was told by his doctors, no strenuous exercises, to include lifting and anything above walking. His next-door neighbor asked him if he could take her to the store to buy some groceries. He informed her that he would be happy to, but he couldn’t lift or carry anything because of his operation. She just wanted a few staples, and she would be happy to carry them herself. She just couldn’t drive. When they got back, she noticed that the blind in her kitchen window moved, and she asked him to stay for a bit until she found out what was going on.

She had a protection order against her husband, who was a large man and a retired Marine. My brother’s friend was living at home with his parents while he was going to a nearby university. When her husband came storming out of the house, accusing him of having an affair with his wife, my brother’s friend was in a position where he couldn’t run or fight, so he drew his 45 and told the man to stop. Not wanting to kill his neighbor, he still shot him several times trying to stop him! The man would have lived if the ambulance had not gotten lost and taken more than an hour and a half to arrive. First aid had been rendered, but the man died on the way to the hospital.

The prosecuting attorney charged him with murder, and the wife of the man who was killed testified for the defense, and he was eventually acquitted, but it cost him thousands of dollars for his attorney’s fees. Now this sounds like an excellent reason to have self-defense insurance. But that is not why I am sending this to you. Years later my brother, his friend, and I were involved in an initiative to change the law in Washington state to stop politically correct district attorneys from prosecuting people who use deadly force in protecting themselves or someone else. And it is quite simple. If you are defending yourself or someone else and the aggressor is seriously injured or dies, and a prosecuting attorney decides to charge you with a crime and you are acquitted, the office of the prosecuting attorney picks up all of your expenses for your defense out of their operating budget.

When an initiative is passed by the voters, it becomes law and cannot be changed for two years in this state. If you are defending yourself or someone else in the state of Washington, get the equivalent of O.J. Simpson’s defense team because if you are acquitted, the prosecuting attorney will have to pay all your expenses. It is said that the most sensitive nerve in the body is the one that is attached to the pocketbook. — Gordon

Self-defense shootings are life-changing events, regardless of the outcomes. I don’t think any Gun Tests readers want to shoot someone who’s threatening them, but they will if forced to. I personally have had self-defense insurance, but I currently don’t, so I see both sides of the issue. If more states adopted the stance you’ve described in Washington state, it would make the decisions not to have insurance a lot easier. Thanks for letting us know. — tw

Mr. Woodard: I don’t always agree with you, but I look forward to every issue of Gun Tests, and always enjoy it when it arrives. I am writing in regard to Scott’s letter in the July 2018 issue. It just makes me want to cry! He says he has been “trying to reload for 10 years,” but always runs into a problem he has to spend more money to fix. Despite his NRA reloading classes, I’m afraid poor Scott got the wrong idea somewhere. He seems to think that the point of reloading is to save time, and that spending more money solves all problems. So Scott, please consider this:

The point of reloading is to load safe ammo yourself, producing ammo that functions well and is acceptably accurate. Set aside your Lyman T Mag II turret press for the time being. Get a simple C-frame single-stage press, like the Lyman Ideal, or the Lee Precision Reloader. Try Lee die sets; for around $30 to $50 you actually get more than the Lyman and RCBS sets whose prices you complain about. Use some Lee dippers and a trickler to throw powder onto your scale. Don’t worry about saving time; instead, focus on making one perfect, safe, functioning, accurate round at a time. When you get good at doing that, then maybe move back to your turret press. Your Lyman 55 powder measure should be adequate, if you develop the correct consistent technique, and choose the right powder. Flake, ball, and short-cut extruded powders work best in all powder measures, including the electronic ones. Scott, all tools require technique to use properly. This applies to a wrench, a stapler, or a reloading press. All of the front-line reloading companies belong to the National Reloading Manufacturer’s Association, and all provide products that work. Tools that cost twice as much seldom work twice as well; they will usually work ten or twenty percent better. This is an improvement most noticeable to the expert user, not the novice. Good luck, Scott, and don’t give up.

By the way, Todd, I just realized that you edited my favorite nightstand book, Cartridges of the World. Good job! — Bruce

Thank you, Bruce. I agree that it’s better to focus on getting the right loads for your firearms first, then try to improve your speed. Reloading should be a satisfying experience for the shooter. And re Cartridges of the World, I’m working on the 16th edition now. — tw