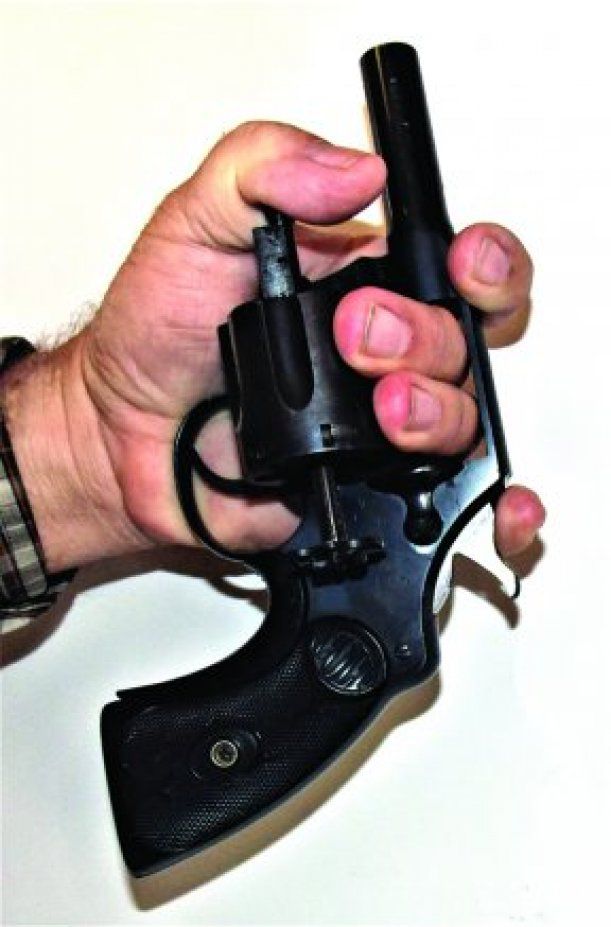 Re “Revolver Speedloaders:Proven Designs and New Innovations,” May 2019

With anticipation I started reading the revolver speedloader review with the hope I could find a more affordable solution for my Kimber K6 revolver. I was disappointed — not in the Gun Tests review, but in the lack of options available for the Kimber. I’ve purchased the Kimber-branded aluminum speedloader (not tested, shown adjacent) that sells for $28. It loads rounds easily, but the rounds really rattle when you gently shake the speedloader, and the device doesn’t lend itself to concealed carry. I haven’t tried the drop test because I only have one! The Kimber model looks like the 5-Star brand, but they are different enough that I don’t believe they are the same. I tried a 25-year-old 6-round HKS speedloader I had on hand. It works, but takes some wiggling to get all of the rounds loaded because it rubs against the K6’s grips. I checked the websites of the brands you tested and found only the even-more-expensive Speedbeez brand has a speedloader that’s rated for the Kimber K6. The size of the Speedbeez, as well as the poor drop-test ratings, doesn’t make it an option for concealed carry for me. Speedstrips seem to be the best option for me for now — they’re concealable and quiet, they hold rounds in place, and they’re relatively inexpensive. — Ken

Ken: Thanks for sharing your experience with other Gun Tests readers. — Todd Woodard

Todd, here are some comments I have pertaining to the revolver speedloader article. I am always pleased to see articles pertaining to revolvers, and very much enjoyed your article on speedloaders. I have a few comments to add to the discussion of the 5-Star brand (and no, I’m not a factory representative):

Editor: I have bought HKS, Safariland, Maxfire, and 5-Star speedloaders for my 357 Magnum revolvers. I came to the same conclusion you did, preferring Safariland, but for different reasons. I didn’t like the Maxfire because I felt it put undue stress on the crane and cylinder axle. The 5-Star, HKS, and Safariland all hold the cartridges the same way; the knob connects to a star-shaped gizmo that is raised and rotated until the points of the star pull down on the rims of the cartridges. This one-point hold prevents each cartridge from moving side to side or pivot away from the axis of the speedloader, but it allows the cartridge to pivot toward the center of the speedloader. Only the Safariland speedloader has a extended shaft with another star device which presses against the cartridge body. This holds the bullet in alignment with the cylinder and allows no wobble. I believe this makes the reload faster. Second, the Safariland only needs a push to release the cartridges. With the others, the cylinder needs to be held while the knob is turned, a two-handed operation.

The height of the speedloader was mentioned. The Safariland tested was a Comp II, which is perfect for a belt pouch. There is also a Comp I, with a low profile for concealed carry. Sadly, Safariland does not make speedloaders for 7- or 8-shot revolvers. I have a 5-Star for my 8-shot handgun and I am happy with it.— A Gun Tests Reader

Hello, Gun Tests. Thanks for another great issue. I really enjoyed reading it, especially the section on speedloaders. Years ago, I was searching for a speedloader for my 10-shot S&W 22 revolver. After all that searching, I found one, saved my money, and bought two. When they arrived, I went to work trying them out. And to my surprise they would not work. After loading and unloading the speedloaders, I decided to contact the maker. The reply I got back was lousy to say the least. I was told that to make them function properly, if at all, I had to purchase a “loading block” and use that along with them. Nowhere in any of the literature or on their website or the catalog where I purchased them from was any of that mentioned. So now I have to save up and buy that expensive tool to make them work. When I go to buy more speedloaders, I will refer back to the May issue.

Also the 44 Magnum rifles was a great article, too. Living here in Louisiana, a 44 Magnum is the perfect rifle for me. I used to have a Winchester Trapper carbine that I had to sell due to hard times. But all the game animals that I shot with it were taken cleanly. Not one of them took a step after I fired it. Fast forward a couple of years, and I found myself back in the market for a 44 Mag. I purchased several different makes of rifles, about six in all, and the rifling twist was all wrong on all of them. I used 11 different commercial loads, four or five of my handloads, and I could not make any of the six rifles group. It was sad. I also bought the Ruger 77 in 44 Mag. with a synthetic stock, and I really wanted it to work. It wasn’t much better. After reading the May issue, I will try the wood-stock rifle. I also am buying the Henry single shot in 44 Mag. for a primitive rifle here at home. Lord knows I got plenty of 44 Mag. ammo to shoot. That’s the silver lining to my 44 Magnum rifle experience, I guess. Keep up all the great articles. — M.

In this issue you tested five higher-priced 1911s. I especially like your results since I own a Gold Cup. In the June 2019 issue, you tested three affordable 1911s. What would have made these tests even better was if you tested the three affordable 1911s at the same range and using the same ammo as in the May test. That way I can directly determine if it’s worthwhile to spend the extra money, or if a low-price compact is comparable to the full-size accuracy.

I also read with interest your take on the 6.5 PRC. What you say is more than likely correct, but you are not taking into consideration your audience. Many of us just went out and dropped significant $s on a 6.5 Creedmoor, dies, and reloading components. I am spending my time finding and testing optimum loads for it. Now along comes a “better” cartridge. But I’m not made of money and can’t justify spending the money or the time on another cartridge. There is always a better cartridge (or a bigger and faster computer). So I’ll just keep going along with the 6.5 Creedmoor, which makes me smile when I shoot it. — Gail

No, I get it. The 6.5 Creedmoor is a great round and very well mannered. No wonder you smile when you shoot it. The Mauser M18 was a great rifle, but we expressed reluctance about buying it because of the new 6.5 PRC chambering. What will really cook your noodle is an upcoming test of 6mm Creedmoor rifles. — tw

Nice review. I would like to add one more loading, the CCI Segmented Subsonic HP rated at 1050 fps, CCI #0074. This is a magic round. So far I’ve nailed three large groundhogs ranging from 62 to 76 yards, and all have been humane, instant one-shot kills. Until I found this round, groundhogs shot with a 22 LR anywhere except the head would crawl back under the barn then die, with the attendant lingering odor. No good. With a suppressor and the Segmented Subsonic hollow point, all you hear is the smack of the bullet impact. Even without the suppressor, it’s very quiet from a rifle, thus incurring neither spousal nor neighborly wrath. In fact, from a 40-X, it’s quieter than a pellet gun. Plus, I’ve fired this from several 22 rifles. In each one it is extremely accurate, shooting like match ammo. Finally, when I retrieve a carcass to dispose of it, there’s no mess like from a 223 Rem. or 357 Mag. (from a Marlin 1894) makes.

For everything from squirrel hunting to varmint control (numerous possums and raccoons have also been eliminated using this round), this is the only load I use. It outperforms all the other subsonic/suppressor-friendly rounds I’ve tested from accuracy to effectiveness.

One last note. The CCI standard-velocity lead round-nose round is indeed very accurate. Many of us use it for club-level Bullseye competition, and I’m a Master-class shooter. While expensive foreign-sourced ammunition is generally used for major matches and Camp Perry, I wouldn’t feel particularly disadvantaged using the CCI subsonic at these venues. — Russ

Dear Todd, the most recent edition of Gun Tests arrived in my mail box this afternoon. I was excited to see on the cover “22 Rimfire Ammo Test.” I quickly flipped to the page indicated to see what you guys had unearthed, as I am very respectful of your unbiased opinions. I was pleased to see the article, but disappointed, too, as I was hoping to find an update to an article that was done some years ago (2010) on a website, comparing 22 ammunition shot from a benchrest rifle to determine the most accurate ammunition then available. I realize you may have to postpone this sort of a study as you just finished one using a pistol, but I would find this a very useful tool in helping to determine what ammunition to purchase for precision 22 shooting. Thank you in advance for considering this as a future article. — Larry

Thank you for the link to the comparison. But as you likely know, rimfire ammo has to be lot-tested in individual rifles to get precision performance. Results from a single rifle, like the one you cite, can give you a starting point, but you still have to buy X different boxes of ammo, and shoot them in your rifle to find the one (or more) it likes. Then buy as much as you can afford. Our test of 22 ammo in a handgun was more for the penetration and expansion aspects, which we had never done before. We don’t recommend people use 22 LR for self-defense, but we wouldn’t like to get shot with a round of it, either.

For more on the stopping-power topic, trainer Greg Ellifritz at ActiveResponseTraining.net has done a comprehensive study of handgun, rifle, and shotgun rounds’ performance in 1800 actual shootings, and the work includes data on how 22 LR cartridges perform. It’s worth searching for and reading. — tw 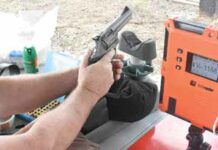 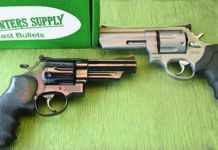