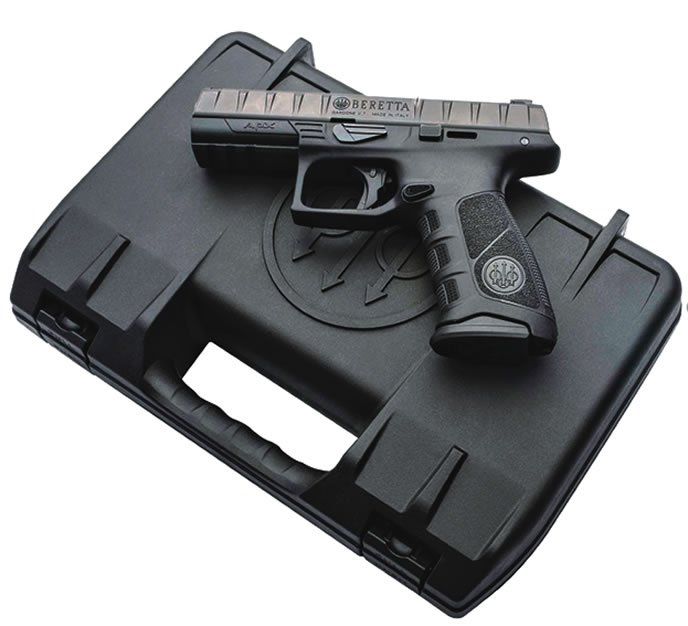 “IDEX is one of the first venues where defense contractors present their wares to worldwide military customers and Beretta felt this was the ideal environment to present the international offering of its APX pistol,” said Carlo Ferlito, general manager of Beretta and Beretta Defense Technologies (BDT) vice president.

Beretta intends to market a variant for the commercial market later this year. The new Beretta APX has an ergonomically-molded reinforced polymer frame fitted with a built-in MIL-STD-1913 Picatinny rail, interchangable backstraps and grip panels, and a modified Browning locking system. The APX is 7.56 inches long with a 4.25-inch barrel.

The trigger can be considered a light double action, with a 6-pound break, 0.2 inch of travel, and a 0.12-inch reset. The rear portion of the striker slightly protrudes from a round slot on the back of the slide as a loaded-chamber indicator.

The slide is machined from stainless steel and has a nitride coating that reduces glare, scratches, and corrosion. Other features include wide front and rear slide serrations, three-dot sights dovetailed into the slide, and no manual safety save for a Glock-style trigger safety.

Ferlito said, “Beretta waited to enter the striker-fired market until we had a pistol we knew would meet the needs of the operator. The APX has been more than three years in development. We tested it extensively with professional end users and incorporated that feedback at every opportunity. The result is a pistol platform that delivers superior performance in durability, reliability, accuracy and ergonomics.”

A slot on the frame allows the use of a tool to decock it before it can be field-stripped by operating a lever found on the left side of the frame.

An optional manual safety system will be available upon request, consisting of a frame-mounted two-position switch. A reversible magazine-release catch and a factory ambidextrous slide stop/hold open release lever help make the pistol suitable for left- or right-handed shooters.

Para to Move to Alabama; Will Name Disappear?

In a statement on Feb. 9, Remington Outdoor Company (ROC) announced that Para USA is scheduled to move to ROC’s new Huntsville, Alabama facility next month — and in the statement, the company hinted that the Para name may soon disappear as well.

According to the company statement, “Para’s products have a strong following due to their key technical and performance features, which are different than many 1911s, including Remington’s own R1 line. ROC intends to keep these features and benefits that our customers have come to trust, while transferring Para’s operations to Huntsville and rebranding Para to Remington. We have learned from our mistakes, listened to our customers, and have a clear plan to smoothly integrate Para. This includes keeping popular Para products, characteristics, and names such as the ‘Warthog,’ while improving quality with state-of-the art machining and engineering in Huntsville, AL….

“Further, ROC will recognize and continue to support Para’s Lifetime Warranty promise on all Para handguns.”

In 2011 Remington re-entered the handgun market with the R1 1911, an updated version of the 1911 Remington made for the US government in World War I.

In 2012, ROC acquired Para USA, a company that specialized in the production of competition, high capacity, and double action 1911-style pistols. After Remington’s acquisition, according to the company, Para, which had been experiencing quality control issues, saw a steep decline in warranty claims. Para USA, LLC is currently located in Pineville, NC.

In 2014, ROC announced its new firearms center in Huntsville.

Streamlight has introduced the $580 TLR-2 HL G, a high-lumen (HL) gun-mounted tactical light with a green aiming laser. The new TLR-2 HL G puts out 720 lumens of light in a wide beam pattern. The integrated green laser, which appears brighter to the human eye in daylight than lasers of other colors, improves aiming accuracy with either a solid beam or a strobe function.

The light mounts on most standard rail guns using Streamlight’s one-handed, snap-on-and-tighten interface. It also can be stored on a handgun. In addition to its lumen output, the TLR-2 HL G delivers 14,000-candela peak beam intensity and a shock-proof C4 LED. Its 510-530-nm green laser is integrated in the light’s reflector. The TLR-2 HL G weighs 4.78 ounces and measures 3.39 inches in length.

Armalite is launching more than 17 SKUs in 2015, with the first guns coming out of the factory being items in the Armalite 3-Gun Series. Available in both 5.56x45mm (M-15, $1,599) and 7.62x51mm (AR-10, $2,099), the Armalite 3-Gun Series rifles feature stainless-steel barrels in both 13.5- and 18-inch lengths. The 13.5-inch models have a pinned/welded muzzle brake to make the external barrel length 16 inches. Armalite’s new muzzle brake and adjustable gas block allow each rifle to be individually tuned. A free-floating handguard, Raptor ambidextrous charging handle, Luth-AR MBA-1 adjustable buttstock and factory installed 3-pound Timney trigger round out the packages.

Cincinnati, Ohio-based Faxon Firearms has added the 7.62×39 Russian chambering to its offerings for the ARAK-21. Faxon’s ARAK platform combines elements of the AR and AK platforms.

Bob Faxon, president and founder of Faxon Firearms, said, “With the addition of the 7.62×39, we are expanding the capabilities for each user of the ARAK-21, adding a larger-caliber round that’s less expensive for most shooters to buy.”

This system makes the ARAK-21 platform one of the most versatile platforms on the market, allowing the user to have have three uppers on one lower (5.56mm NATO, 300 Blackout, and 7.62×39).

Current ARAK-21 users/owners can simply purchase the 7.62×39 kit as an addition to their current rifle upper. The 7.62×39 caliber kit comes with an interchangeable bolt, firing pin and barrel.

Utah-based firearm-suppressor manufacturer SilencerCo announced the debut of its EasyTrust service, which creates a legally-valid gun trust for $129.99.

According to the company, the online service removes several steps in the process of purchasing silencers and other items regulated by the National Firearms Act (NFA), while also protecting the rights of individuals, families and groups to own, transfer and possess NFA-regulated firearms.

SilencerCo says the EasyTrust has been prepared by qualified legal counsel and is valid in all 50 states. Among the benefits of a gun trust is the elimination of certain NFA item pre-purchase requirements, including, for now, written approval from a local chief law enforcement officer andsubmission of buyer photographs and fingerprints.

“Since we entered the sound suppression business a few years ago, we have constantly looked for ways to provide products and services that make more people aware you can buy silencers, and that make the purchasing process easier,” said SilencerCo CEO Joshua Waldron.

A properly-prepared gun trust has significant advantages for gun owners. It enables the use of NFA-regulated firearms among family members and trust members, protects against potential future regulatory restrictions, and provides for the transition of ownership upon death.

Signal 9 Defense based in Gallatin, Tennessee showed one of the more unusual firearms at the SHOT Show: the 4-barrel Reliant handgun. The Reliant is pitched as a personal defense or backup firearm that has no external action like a revolver or a pistol. It functions more like a break-open shotgun.

The stainless-steel barrels are mated to a hard-coat anodized aluminum frame. The company is pitching the Reliant’s patent-pending all-internal action as having no jams, and the action cannot be neutralized by an assailant grasping the gun.

A four-shot speedloader fits in the grip. The grip automatically activates an optional red or green laser. Signal 9 Defense has partnered with LaserMax, so the handgun comes prewired so users can decide at a later date to drop in the laser, if desired.