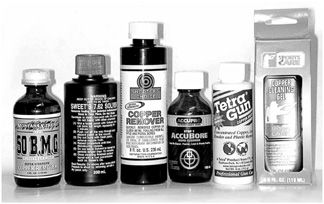 Most of us have given our fine rifles a lick and a promise with Hoppe’s No. 9 or Shooter’s Choice over the years, and after getting a few not-too-dirty patches out of the anointed bore, we consider the job to be done well enough. However, in many barrels, a thin copper film can grow over time, with the result being lumps of fouling on the steel that are almost impossible to remove by ordinary means. One of our testers used to have an ancient .375 H&H Magnum Winchester Model 70 that he shot often. Because of faulty cleaning, that rifle eventually developed lumpy fouling that the owner could never totally remove. Its accuracy diminished over time, and the rifle was eventually sold, with an unhappy rifleman left behind.

More recently, Gun Tests staffers have evaluated rifles from outstanding makers such as The Robar Companies, that came with specific instructions how to clean and break-in the barrel. Throughout our shooting of that sub-half-MOA Robar rifle and several others, including a fine .22-250 Savage, we maintained totally clean bores. The barrels were cleaned down to blued steel, or in the case of stainless barrels, pure white metal. When treated correctly, those rifles, and a few others along the way, shot amazingly well. We discovered there was no room for fouling in excellent bores. But we don’t clean the test-rifle barrels this way all the time. If we find a rifle that is trying very hard to shoot, like that Savage, we give it every chance, and keep the bore immaculate. If a rifle has an unexplainable problem, such as an otherwise fine Ruger now being evaluated, we will clean the bore thoroughly to eliminate one possible source of trouble. But most of our test rifles get normal treatment, and generally shoot quite well.

One recent problem rifle has been the subject of massive cleaning and frustration for one of our test staff for many months now. The rifle is a pre-’64 Winchester Model 70 in caliber .30-’06. The rifle was made in the 1950s and is in nearly new condition. It came from the factory with a slightly undersize groove diameter. It measured 0.307 inch, tight enough that the rifle also came to its present owner with bore fouling that seemed to be welded in place. No common solvents could remove all traces of fouling, and the problem was amplified by the owner’s attempts to fire-lap the bore. This process requires an absolutely clean bore for the job to be properly done. This proved to be impossible, said the owner, though he admitted he didn’t try to plate out the copper.

We were also attempting to remove the fouling with continued fire-lapping, which eventually helped, so we never had a lack of copper fouling to remove from that one rifle. We first tried all six of the chemicals on the copper-streaked bore of the rifle, following the instructions that came with each product as best as we were able. All would remove some of the copper, some more easily or more pleasantly than others, but none would take it all out. In our initial cleaning attempts, the product that came closest to doing the job was the relatively new Montana X-treme 50 BMG, which smelled the strongest of ammonia of all six tested cleaners. Next came Sweet’s 7.62, followed by the four others in no particular order. We must note that one of the cleaners, Sports Care’s Gel, was perhaps the most pleasant to use because of its kindness to our lungs and fingers. It is claimed to be biodegradable, and that was nice to know. However, in our bullet-soaking tests, it seemed to be the least active at physically dissolving copper from a test bullet.

After our initial relative failure to get all the fouling out of the bore, we found an Internet forum devoted to bench-rest shooting, and one of the comments there suggested how to clean a barrel relatively thoroughly in a short amount of time. Before we give you that information, and how well it worked for us, we’ll tell you our common cleaning procedure was to shoot five fire-lapping shots, and then try one or another of the solvents, shoving soaked patch after bristle brush after patch through the bore, waiting several (or many!) minutes between patches, and vigorously scrubbing the daylights out of the barrel. Our effort would commonly include over an hour of scrubbing, all to no avail. The copper stayed in that bore.

The ultimate clue came from the Internet bench-rester, who told us to add one item to the cleaning procedure, J-B Bore-Cleaning Compound. The suggested technique was to run two or three patches soaking-wet with Montana X-treme’s 50 BMG through the bore, and leave the bore wet. Then, anoint either a bristle brush or tight-fitting patch with J-B Compound, run that through the bore vigorously, add some more 50 BMG to the J-B patch and rub some more, and then wipe that all out with more wet patches. Follow up with a couple of dry patches. That, he said, would result in a clean bore. We tried it. After several repeated applications that included J-B Compound and lots of 50 BMG, we saw for the first time the bluing beneath the copper fouling that had plagued us so long.

For whatever reasons, five more fire-lapping shots resulted in more extremely hard-to-remove fouling, but with continued work (and we do mean work), the barrel eventually became slightly easier to clean. By that time the rifle’s bore had become measurably tapered from all our fire-lapping. The breech now measures just over 0.309 inch and the muzzle is just under 0.308 inch. Along the way we again and again tried all six solvents independently of each other, and tried several of the most promising with J-B Compound, but nothing would do the job as well as the foul-smelling, oil-based Montana X-treme 50 BMG. We concluded it was the best of our test cleaners for serious copper fouling. Sweet’s 7.62 was our second choice, but unlike the Montana X-treme product, it could not be left in the bore for prolonged periods. We tended to put Shooter’s Choice Copper Solvent in third place, but there were advantages to the less-obnoxious smelling Accubore and Sports Care products. The gel-like Tetra product had a bit of ammonia smell as well.

By no means were any of the six products ineffective. They all worked. We ended up with more faith, or greater liking for, the two at the top of our list. We used bristle brushes, not bronze, throughout our cleaning efforts, per the instructions on several of the products. Excellent brushes are available from Montana X-treme or from Brownells. One more item: The instructions for 50 BMG caution you to work in an area with adequate ventilation, to which we add a strong “Amen.”

Bullet-Soak Test
We made an attempt to evaluate the strength of each solvent by soaking six carefully weighed bullets in the chemicals over a period of four days, with periodic agitation of the containers. The bullets were FMJ 55.0-grain .223″ Hornady, with a small bit of lead exposed at the base. We selected six that each weighed exactly 55.0 grains. After four days, the bullets came out of the chemicals with varying degrees of blue discoloration to the chemicals, indicating dissolution of the copper jacket. We cleaned and weighed the bullets and recorded the weights, which are presented in the accompanying table. We also examined and measured the bullets for signs of missing metal, and found erosion in two cases. In one case the erosion was pronounced, though that said exactly nothing about what would happen to the steel of the barrel beneath the copper fouling.

All bullets weighed exactly 55.0 grains before the solvent-soak tests. We noted the bullet soaked in Montana X-treme also had the lead slightly eaten away at the bullet base, which none of the others touched. The three top-rated solvents above also gave measurably smaller bullet-base diameters.

Sweet’s 7.62 Solvent gave severe etching of the bullet. Mild etching was noted from the Shooter’s Choice CR solvent. Note the “No” rating of both of those solvents in the accompanying table. All the rest of the test bullets had a slightly frosted appearance, with no etching apparent. The Sports Care bullet lost exactly no weight during the soak test, which seems to indicate a less-intensive copper-dissolving formula. We thought Accubore was a bit more pleasant and easier to use than Tetra-Gun’s gel-like product, though the latter may have been slightly more aggressive.

As mentioned above, all of these work, and we believe the “worst” of them will remove copper fouling (or lead or plastic) better than the more commonly used products such as Hoppe’s No. 9 or Shooter’s Choice MC #7. We are not certain that the long-term soak was a clear indication of the worth of the cleaners. It may be that the solvent needed other activity along with the soak, such as mild wiping away of the surface to expose new surfaces, as a patch or brush might do. A further test would be to include an iron nail into the mix and examine it after lengthy exposure to determine if the solvent acted differently.

One final note is that, as hinted above, all of these worthy cleaners require lots of physical work to do the job. We are aware there are several plating-type cleaners (not inexpensive) that typically suspend a rod in the center of the bore and pass an electrical DC current through the system, and actually plate the copper deposits from the barrel’s surface onto the rod. Such a system can be rigged by the home experimenter, using something like a welding rod wrapped with electrical tape and a suitable electrolyte, and also a power source such as a car battery.

Another old cleaning technique was to plug the breech and fill the barrel with commercial-grade ammonia, with a rubber tube at the muzzle to extend the liquid up above the muzzle. This too we have not tried, though old-timers claimed it worked well. We have no idea where to buy such ammonia, short of a chemical supply house, to which we don’t have immediate access. Also, this use of such powerful ammonia can be hazardous, and is probably not best for the casual shooter to mess with any more.

We would prefer to stick with the commonly available bore cleaners, and for our future barrel-fouling problems we’ll be using Montana X-treme’s 50 BMG.