We have yet to meet a gunsmith who knows all there is to know about repairing, improving and servicing all kinds of firearms. Nor have we ever met one who’s discomfort level fails to rise when a gun he’s never worked on, or hasn’t seen in years, comes in. Unless you specialize—rifles only, pistols only, shotguns only, stocks, engraving—you can ill afford to turn down work unfamiliar to you, yet you can’t afford not to if performing it could create a dangerous situation.

That’s why books take up much space in the best shops. They’re our safety net, and they have proven their value many times by showing a way to fill a customer’s needs.

Not counting ballistics manuals, powder manuals, armorer’s school manuals and several volumes on machine-shop practices, there are several publications no gunsmith’s reference library should be without.

Chronologically the oldest, having been first published in 1882, The Gunsmith’s Manual by J.P. Stelle and William B. Harrison may sound too old to be of current use. Whether it is or not depends on the value you place on gaining basic knowledge.

The book’s first 18 pages present one of the most concise histories of the gun, from the discovery of gunpowder to the breechloader, we’ve ever read. The authors’ recommended procedure for removing a rusted-in screw is still widely used 111 years after they put it in print, and their chapter on nomenclature, once absorbed, can make you an instant expert on the lock work of a muzzleloader. We personally have found the little book to be a good source to turn to for restoration work or blackpowder-kit building, disassembling and cleaning an heirloom Ballard rifle. The instructions for doing so are found in Chapter 42, along with those for the Maynard, Peabody Martini, Whitney, and 22 more old-timers.

Another oldie but goodie is The Modern Gunsmith. Published in 1934, it is really two volumes in one by James V. Howe, who was widely known among gunmakers and in charge of the Small Arms Development Division at Frankfort Arsenal after World War I. The 1982 edition distributed by Crown Publishing, Inc. includes a 1941 update on “the latest developments” in metallurgy, high-velocity projectiles, the Garand, the Johnson rifle and other semi-automatic weapons of the day.

To say the author delves deeply into the multiplicity of subjects he addresses in this 907-page book would be understatement. His chapter on stock surgery alone covers shaping the Springfield sporting stock, first steps in remodeling, reinforcing bolts, fitting new butt plates, raising the comb on service rifle stocks, attaching combs, attaching pistol grips, gluing inlays and inserts, the use of dowels, marking off the drop and other layout lines, working over forearms, mistakes of the amateur, glued-on cheek pieces, inserted cheek pieces, refinishing ideas on patches and inserts, removing the pistol grip from shotguns, reshaping forearms, repairing broken stocks, and using gunmaker’s shellac and plastic wood.

By the way, Mr. Howe not only instructs you in the use of gunmaker’s shellac, in a later chapter he tells you how to make it. You can buy the stuff in ready-to-use sticks these days, but for those with a bit of pioneer spirit, Howe’s formula is a dandy. You will find The Modern Gunsmith also contains an abundance of cautions regarding gun work. They are worth committing to memory because all are as true today as they were 60 years ago.

Roy F. Dunlap’s book, simply titled Gunsmithing, is self-described as “a manual of firearms design, construction, alteration and remodeling for amateur and professional gunsmiths and users of modern firearms.” The book has been through at least nine printings since its original copyright in 1950 and totals 735 pages. Its early chapters are devoted, as are most gunsmithing books, to the work area, tools,and sources of supply and shop practice.

What makes Dunlap’s recommendations more meaningful is their specificity. For example, instead of merely bringing up the need for a bench grinder, he cites why a 1/4- o r 1/3-horsepower, double-shaft model, turning at 1,750 rpm with a wire-brush wheel on one side and a medium-coarse wheel on the other is the best choice. He supports his recommendation by explaining why you’ll find wider use for a medium coarse than a finer stone. His chapter entitled “Helpful Gunsmith Knowledge,” is absolutely crammed with bits of information, and includes tips that he evidently could find no other place for in his book. In the midst of a general discussion on disassembly, for instance, Dunlap digresses to describe in detail a L-shaped tool he made to simplify reassembly of an L.C. Smith double and how to use it. It works.

While Dunlap’s writing does not reflect the latest sources, technology, tooling, techniques and prices, it still provides a rock-solid foundation for anyone involved with repairing, restoring, modifying or customizing firearms. His book is considered a classic.

So is Pistolsmithing, by George C. Nonte, Jr. First published in 1974, it concerns itself with pistols, revolvers and nothing else. After eloquently disposing of the obligatory dissertation on the workplace, tools and their uses, Nonte plunges ahead with a chapter on function that should be required reading for anyone who even owns a handgun. From there, he moves rapidly—omitting nothing of importance—to cover every aspect of repair, tuning, accurizing, rebuilding and refinishing.

You don’t have to know anything about pistolsmithing to understand Pistolsmithing. Nonte’s writing is simple, shuns technobabble and, in many cases, requires only the use of basic tooling.

Actually, this book was not primarily intended for the professional gunsmith. It was instead directed to the home mechanic or to an individual aspiring to become a gunsmith. While it achieves that purpose admirably, Pistolsmithing has found a prominent place on the bookshelves of a large number of experienced ‘smiths.

If you’re going to become involved with finishing or refinishing gun metal, a copy of Firearm Blueing and Browning by R. H. Angier is a must. Then there’s Gunsmith Kinks, Volumes I, II and III, published by Brownells. They offer a rich stew of better ways to do almost everything that have been discovered by customers of the old-line gunsmith supply house. Included are shop tips, drawings, parts suggestions and jigs and fixtures, all amassed over the years from the company’s quarterly newsletter and indexed for easy referencing. An interesting feature of Kinks III is the cross indexing. When you look up a subject in III, you’ll find where additional information on the same subject appears in Kinks I and II. If there’s a bottom to these wells of useful information, I have yet to find it.

It’s safe to say that the entire series of disassembly/assembly manuals published by Gun Digest Books and authored by J.B. Wood will prove indispensable. There are separate manuals available on centerfire rifles, revolvers, semi-autos, rimfire rifles, shotguns and law-enforcement weapons. Between these and the NRA’s Shoulder Arms and Handgun Assembly manuals, you should be able to take down and put back together almost any modern firearm the first time you put your hands on it.

Useful, but not as indispensable, are books containing exploded firearms drawings and as many parts manuals as you can get from manufacturers. There’s nothing contained in any of the above about repair, servicing or alterations, however.

For that, and depending on your prevalent needs, you should consider Jerry Kuhnhausen’s series of shop manuals. They are up to date and thorough in covering the Colt M1911A1, Colt revolvers, Ruger double-action revolvers, the Mauser, the Remington 870, 1100 and 11-87 shotguns, and Smith & Wesson revolvers.

An excellent alternative, or addition to, Kuhnhausen’s M1911 manual is Ken Hallock’s .45 Auto Handbook, which delves into tuning and accurizing in a simpler, but equally effective, manner.

If you plan to do much rifle work, add a copy of Barrels and Actions, copyrighted in 1991 by Harold Hoffman, to your initial list of books. In the process of teaching the reader how to make rifle barrels from scratch, Hoffman covers every aspect of drilling, reaming, straightening, rifling, turning, threading, fitting and finishing. As far as I know, it’s the only book around dedicated 100 percent to this subject. You’re going to need a good lathe with a bed big enough to accommodate a rifle barrel if you intend to put into practice what it preaches. If you never make a barrel, the information here about reaming, threading, fit and finish alone makes the purchase worthwhile.

As far as factory manuals are concerned, few manufacturers make them available to other than authorized warranty service centers or armorer’s school graduates. Remington and Winchester are exceptions. Remington’s Sporting Firearms Field Manual contains repair, maintenance and care information for its currently produced firearms. Included are schematics, exploded views, parts lists, assembly/disassembly steps, cycling, operation, malfunctions and cures to specific problems. Winchester Factory Manuals are exact duplicates of the originals for the Model 88, Model 94, Model 70 and Model 12. These are comprehensive take down/reassembly guides with notes at the end of each manual for troubleshooting.

Not to be overlooked in the softcover category are military technical or training manuals. There are several dating back to at least World War II, and they’re comparatively cheap. You’ll find them covering both small- and large-caliber pistols, shotguns, revolvers, the Springfield Rifle, the M1 Garand, the M1 Carbine, the M1A, M14, M16 and just about every other gun that was, or is, GI. Though all are useful, the gems to seek out are those produced for ordnance technicians assigned to the U.S. Army and Marine Corps marksmanship units. If you want to make a reputation for building the best tack drivers around, start by soaking up what’s in those manuals.

Stay away from books that show you a lot of what, but not much how. Get into classics like Hatcher’s Notebook, which I have omitted along with several other hardcovers in the interest of holding down your initial investment. But definitely avoid offerings that fail to encourage hands-on experience, and those with titles that promise far more than their content delivers. Be selective. Make certain the books you purchase, now and later, almost force you to the work bench to test and develop your skills. The coffee-table gun books have no practical place in your shop. 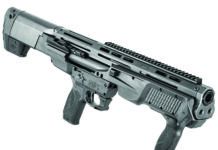