Recently, a GT reader commented favorably on our ongoing ammunition testing. He liked the testing and found it informative. He wondered if we would be willing to conduct an extensive test of 9mm Luger ammunition.

The suggested test would involve subcompact, compact, and service-length-barrel handguns. This could mean barrel lengths of about 3.5 to 4.9 inches. The editor suggested we add a carbine-length 9mm as well because the 9mm is popular in both handguns and carbines.

But choosing the right handgun load is important. As an example, a load that expands readily in the shortest-barrel 9mm might expand too quickly for optimum performance at higher velocity from a service-grade handgun.

By the same token, a load that expands well from the 4.9-inch barrel might not expand at all or poorly from a short-barrel handgun. The problem is magnified when a 9mm carbine is part of the firearms battery.

So we set out on an extensive test. We fired more than 2,000 cartridges over a period of 14 months. Our goal was to find an all-round load that performed well in all the platforms but that didn’t beat up the shooter or the guns.

Notes: Average Velocity and standard deviation readings were obtained by firing four five-shot strings over a Competition Electronics Pro Chrono. Ambient temperature: 86 degrees. Elevation: 815 feet above sea level. The accuracy figures are the average of two five-shot groups. For accuracy, we fired the test gun from a benchrest at a 15-yard target. To calculate IPSC power factor, multiply bullet weight in grains by the velocity in fps, then divide by 1000. The retained-weight column shows the recovered bullet weight as a percentage of the actual bullet weight.


The 9mm is everyman’s caliber these days, and it isn’t unusual for shooters to carry different-size 9mm handguns, depending on the weather. The same shooter may keep a 9mm carbine for home defense. We think it is better for the multi-gun 9mm shooter to have one or two loads on hand for optimal performance in different firearms and situations.

We do want to note that the primary advantage of the 9mm carbine will be in accuracy and shot placement. The 9mm doesn’t gain as much velocity from a 16-inch carbine as some might think. As a comparison, the 357 Magnum often gains several hundred feet per second in a carbine. In 9mm, a difference of 100 fps is considered a big plus. It was interesting that the heavy 147-grain loads gained the most in the carbine, up to 169 fps with the Speer Gold Dot bullet.

We fired into water jugs to test expansion and penetration. While only one load was a truly poor performer, some were better than others. In the end, the middle of the road in weight and velocity isn’t a bad place to be. Here are the round-by-round summaries.

We know of a couple of GUN TESTS readers who are lawyers who carry a KelTec Sub-2000 in the trunks of their cars. Small, accurate, and suitably powerful with the right ammo. 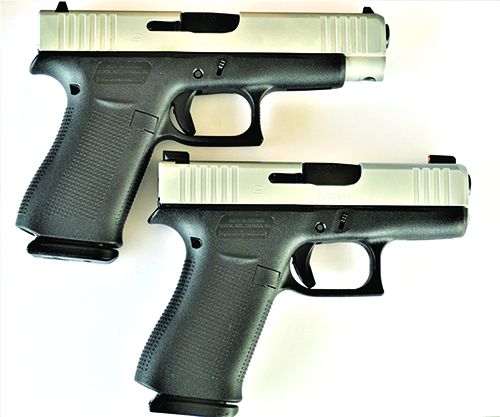 The Glock 48, left, features a slightly longer barrel than the Glock 43X and might be a better choice based on this am-munition test. 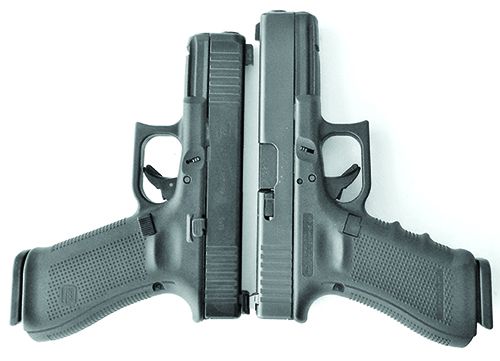 The Glock 45 9mm, left, and the Glock 17, right, have measurably different performance as a result of the different bar-rel lengths.

Here’s Remington’s 124-grain Golden Saber. The bullet on the left, fired from the carbine, shows the consistent opening of the jacket.

The 124-grain Fiocchi is a viable choice operating at low pressure. 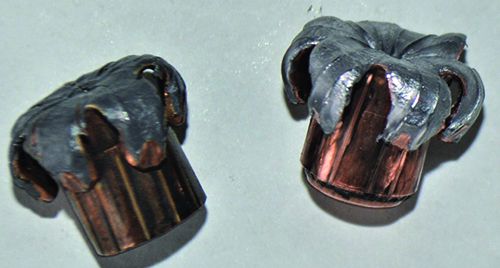 The Gold Dot offers deep penetration and good expansion for those preferring a 147-grain bullet.

Above, left to right are the mushroomed samples of the SIG V-Crown, Speer Gold Dot, and Browning X bullet 147-grain pills.

The Fiocchi load is more affordable in 50-round boxes, and those are what you should seek. Velocity ran 1130 to 1240 fps, picking up quite a bit in the carbine. Expansion was very consistent at 0.52 to 0.55 inch. Penetration in water was 16 to 18 inches. We liked this load based on expansion, penetration, and low recoil.

The 124-grain Fiocchi load demonstrated more penetration, 17 to 20 inches, than the 115-grain load. Expansion was slightly less at 0.50 to 0.54 inch, but very consistent. It isn’t as fast as some other loads, but we like the balance of expansion and penetration, and it doesn’t introduce heavy recoil into even lightweight handguns. In the carbine, it hits like a +P from a pistol, but with light recoil and modest pressure.

We wanted to test +P loads as well as standard loads and we are glad we did. Expansion and penetration in the pistols was just a bit over the standard-velocity Fiocchi load. Velocity in the pistols began at 1214 fps. In the carbine, velocity jumped to a solid 1301 fps. Penetration ran from 20 to 24 inches and expansion 0.55 to 0.62 inch. This is a load that maximizes the carbine length barrel and offers two feet of penetration. Yet, it is controllable. You have to decide if you wish to run +P loads in your handguns.

The Speer Gold Dot +P offers similar performance to the American Gunner +P with velocity of 1198 to 1305 fps, slightly slower in the handgun compared to the Hornady +P and slightly faster in the carbine. This bullet showed the greatest increase in expansion when fired in a carbine, from 0.64 in the pistol to a startling 0.75 from the carbine. Penetration is 17 to 20 inches. We feel that it would make an excellent home-defense load in both short arms and long arms.

The Remington Golden Saber +P offered a clean powder burn and reliable feeding. Velocity ran from 1090 to 1180 fps. Penetration was very consistent at 18 inches, with little to no deviation between the different firearms. Expansion ranged from 0.58 to 0.78 inch, with the higher number the result of a consistent outcropping of the Golden Saber jacket. The Golden Saber offers reasonable performance from the handgun and very good performance from the carbine at standard pressure.

This is among the most consistent loads we have tested. The standard deviation, which is the difference in velocity between shots, was as low as 10 fps. Penetration was also consistent at 18 to 24 inches. Expanded bullets were between 0.54 to 0.58 inch. Velocity ranged from 1129 to 1201 fps.

The 147-grain V-Crown exhibited velocity of 940 to 1090 fps, the fastest overall of the heavyweight bullets. You have to look hard at the performance. Some purchase a 147-grain loading for increased penetration. In the handguns, average penetration was 14 inches. In the carbine, 17 inches, with expansion picking up from 0.59 to 0.64 inch. So the load did not blow up at higher velocity. This looks good for home defense in both handguns and carbines.

The Speer Gold Dot features a bonded bullet that is manufactured literally by punching a hole in the original jacketed core. The Gold Dot has been in use a considerable time, and in previous tests, it has given good results in most scenarios. The Gold Dot is at its best at higher velocity, but it expanded even at the lowest velocity in the Glock 43 9mm. Penetration remained remarkably consistent at 15 to 16 inches, despite a difference in muzzle velocity from 911 to 1080 fps. Expansion was 0.55 to 0.62 inch. There was more disruption of the water jugs at higher velocity. If you like the 147-grain weight and deep penetration, this is a viable loading. Performance is little affected by velocity. We prefer the performance of other loads in the shorter-barrel handguns.

This round’s expansion was poor, running from 0.46 to 0.50 inch. One bullet failed to expand at all. There were so many other choices, we’d pass on this one.

During the testing, we took notes and compared expanded bullets and worked to eliminate some choices. To our surprise, we found the sweet spot of performance and shootability in the middle.