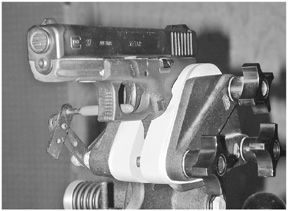 The .45 Glock Automatic Pistol (.45 GAP) cartridge was developed by Speer for chambering in Glock’s new Model 37, in much the same way Smith & Wesson and Winchester worked together to develop the Model 4006 and .40 S&W cartridge, respectively. Glock and Speer’s goal was to provide double-digit magazine capacity in a .45 auto with a grip the same size as a 9mm/.40 Glock. In this they succeeded; the Glock 37 fits 10 rounds of .45 GAP into magazines the exact same size as Glock’s 9mm/.40 chambered guns, making it an 11-shot gun fully loaded (10 in the magazine, one in the chamber).

Currently, two guns are chambered for .45 GAP, the Glock 37 and a Springfield XD, and in testing in June and December 2004, we found the combination of gun and cartridge to be a worthy competitor to similarly sized 9mm and .40 S&W guns, and to be ballistically on par with the .45 ACP. However, because the cartridge is so new, very few people know how GAP rounds perform, so we wanted to find out.

Our testing procedure had several stages in it. If a round was found wanting at any stage, it was removed from the rest of the test, and the survivors continued. The stages are described briefly below; a more detailed testing procedure can be viewed and downloaded free of charge at (www.gun-tests.com/performance/ammunition.html). Or log on to gun-tests.com, click on Tools & Techniques, click on the Ammunition header, and the test protocol will be the first entry.

Reliability.Every round fired passed the reliability portion of the test. The gun worked perfectly. Our test gun has never malfunctioned.

Velocity.Velocities were recorded by firing 20-shot strings over a CED Millennium chronograph. Every load met our standard for consistency, albeit barely in the case of the Winchester Silvertip. The results appear in the accompanying table.

Accuracy.Because none of this ammo met our normal 2.0-inch standard we widened it to 2.5 inches. After [PDFCAP(1)], the only loads left were the Speer 200-grain Gold Dot hollowpoint and Winchester 230-grain jacketed hollowpoint. The results appear in the nearby table.

Recoil Level.Though only two loads remained in the test at this point, information for all five loads is provided in the accompanying table. Obviously, both remaining loads are hard kickers close to our cut-off level for recoil. By far the most controllable load tested, the Winchester Silvertip, did not meet the accuracy standard.

When Speer and Glock were developing their cartridge, they were well aware of the joke many “wits” told when the 10mm Auto was shortened and downloaded as the .40 S&W, that “S&W” really stood for Short & Weak. One of their priorities was that no one be able to say the .45 GAP was a watered-down .45 ACP. Thus, both Speer loads generate ballistics in line with .45 ACP +P. The Federal Hydra Shok followed suit. Even the Winchester 230-grain load is fairly hot for its weight by .45 ACP standards. The only load generating standard .45 ACP ballistics, thus standard .45 ACP recoil, is the Winchester Silvertip.

While it was probably necessary for the .45 GAP’s long-term success that it avoid the early stigma of being a weak man’s .45 ACP, for it to become a viable defensive choice for most shooters the cartridge needs more loads generating standard rather than +P .45 ACP ballistics. That translates to the 185-grain bullets going 950 fps instead of the hundred-plus feet per second faster the Speer and Federal loads do now. Winchester’s Silvertip perfectly meets that standard, and is by far the most easily controllable .45 GAP defense load with a 175.1 pf. However its accuracy level is a bit sloppy. Currently, the shooter arming himself with a .45 GAP had better be able to stand almost a 200 power factor level of recoil if he wants decent accuracy.

Penetration, Expansion, Weight Retention. The Speer 200-grain Gold Dot and Winchester 230-grain jacketed hollowpoint were both fired into water. The Speer Gold Dot totally penetrated all three jugs and was thus eliminated from consideration as a carry load, at the final test, for dangerous over-penetration, especially on a frontal shot given the human body’s narrow chest-to-back diameter.

The Winchester 230-grain jacketed hollowpoint penetrated 18 inches of water; it came to rest in jug #3 but had hit the back of the jug hard enough to split it. Thus its penetration, though it may delight those adhering to the deeper-is-better school of stopping power theory, was still too deep for our tastes. The recovered bullet had expanded to 0.79 inch and weighed 220 grains even.

Finally, just out of curiosity, we fired the Winchester 185-grain Silvertip into water. We really wanted to know what sort of expansion and penetration we could expect from the .45 GAP’s most controllable load. The Silvertip penetrated 15 inches of water, which is better than the Winchester 230-grain jacketed hollowpoint, though still a bit on the deep side. The recovered bullet measured 0.77 inch and weighed 179.8 grains.

Gun Tests Recommends
At present, we believe there’s no 100 percent satisfactory defense load in cartridge .45 GAP. Everything available is a bit lacking in accuracy (though if you want to argue we’re being too strict in this area you’re certainly welcome). Four of the five loads currently available generate .45 ACP +P ballistics and are thus toward the high end of controllability. The most controllable load now available, the Winchester Silvertip, wasn’t particularly accurate in our test gun. So here’s what we would buy if we were shopping for .45 GAPs:

• Winchester USA 230-grain jacketed hollowpoint (Load No. USA45GJHP), approximately $15.64 per 50-round box. Buy It. This was the ammunition that came closest to meeting all our standards. It worked with perfect reliability in our test gun. Its standard deviation of 10 fps was acceptable. It was the most accurate ammunition tested, with a 2.3-inch 25-yard average for four 5-shot groups. It generated heavy recoil, but then with one exception, so did everything else in the caliber. Its expansion and weight retention were excellent. Our concern about the load was that its 18 inches of penetration is too deep.

• Winchester Super-X 185-grain Silvertip hollow point (Load No. X45GSHP), $23.88 per box of 50. Conditional Buy. The only other viable choice, in our estimation, would be the Winchester Silvertip. It was perfectly reliable in our test gun. Its standard deviation of 19 fps was within our test range. Though it failed the accuracy standard with a 3.0-inch average, it was by far the most controllable load in the caliber at a 175.1 pf. That alone would make it a serious contender as “best .45 GAP defense load.” The Silvertip’s expansion and weight penetration were both excellent. Its penetration depth, though still deeper than we really like to see, was at least not so deep as the Winchester 230-grain jacketed hollowpoint.