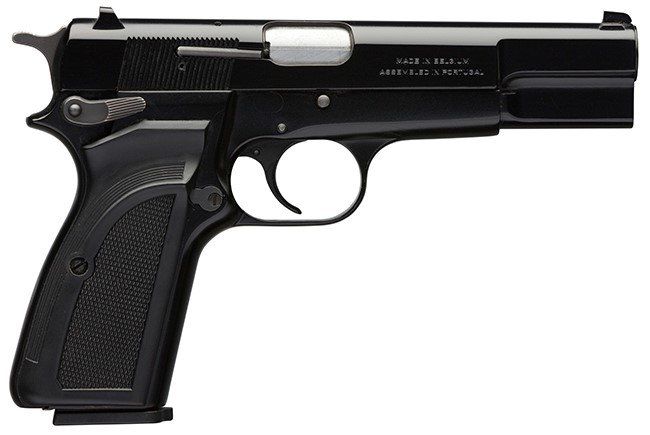 Browning has announced that its Hi-Power pistol production has ended, effective EOY 2017. That’s a shame, according to Gun Tests Magazine, which has tested various Hi-Powers over the years and found them to be generally effective as concealed-carry weapons (CCW).

“For many shooters of a certain age, it will come as a shock that John Browning’s final handgun design has been discontinued,” said Todd Woodard, Editor of Gun Tests Magazine. “They were a favorite CCW handgun for many gun owners.”

Woodard said, “One commenter on our site relayed that he had ‘… more than one Browning Hi-Power in 9mm and 40 S&W and one Fabrique Nationale 9mm made for the Israeli Police. All are completely reliable. I have had the triggers worked to give 4.5-pound pulls. The Hi-Power is a classic, beautiful design that feels like it belongs in your hand and gives a natural point of aim. The Hi-Power and Colt 45 1911 are the two best pistols that John Browning designed. They have been time proven under all circumstances and are arguably the two best pistols ever made. I personally prefer the Hi-Power.'”

In a notice on the Browning website, the company said, “… although it is possible to still find a few Hi-Power pistols at dealers across the U.S., the Hi-Power is technically out of production. Current dealer inventories will be the last available from Browning for the foreseeable future.”

John Browning worked for Fabrique Nationale of Herstal, Belgium while he produced the double-stack, single-action 9mm, called Grande Puissance in French. In 1923, he filed a patent on his work. Dieudonne Saive, who was then Browning’s assistant at FN, completed the design.

Woodard said the Hi-Powers shown below were the last two models in production (and offered to dealers). “If you’ll recall, Browning stopped production of the line back in 2000 as well, but then re-cataloged the Mark III, Practical, and Standard models in 2002.”

Woodard said the last two Hi-Powers were the Mark III and Standard models.

“The Mark III has a receiver of machined steel with a black epoxy finish, a 4 5/8-inch barrel, and high-profile fixed sights. The action is a locked-breech design with a single-action trigger, ambidextrous thumb safety, and composite grip panels. Shooters who want to find one can search for the gun as item number 051001393 or UPC 023614629924. I expect shooters will have to pay around the $1100 MSRP to get one now.”

Woodard said, “The Hi-Power Standard’s receiver and frame are steel with gloss- blued finish. The rear sight is adjustable. The action, trigger, and ambi safeties are the same as the Mark III, but the Standard has checkered walnut grip panels. Search for Item Number 051004393 and UPC 023614679486 if you’re interested in getting one of the last of the run.”