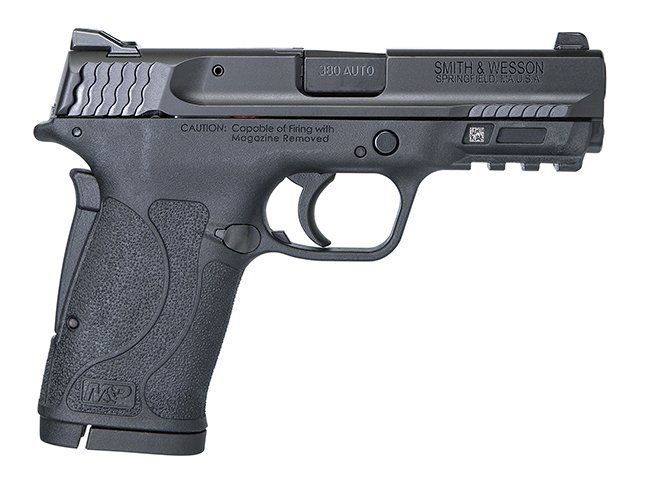 Smith & Wesson’s new M&P380 Shield EZ pistol is a personal-protection and everyday-carry sidearm which is being marketed as easy to use (EZ), a test consideration that Gun Tests Magazine’s concealed-carry readers ask about all the time.

“This is a recent promotional trend in small pistols,” said Gun Tests Editor Todd Woodard, commenting on the S&W M&P380 Shield EZ chambered in 380 Auto. “Smith announced the handgun as being easy to use, having an easy-to-load magazine, and offering an easy-to-clean takedown. Those are the prime aspects of a test our readers want to know about as well, so it’s interesting that Smith & Wesson is rolling out this pocket pistol pushing those features.”

Jan Mladek, general manager of M&P and S&W Brands, said, “When we set out to design the M&P380 Shield EZ pistol, our goal was to deliver an all-around, easy to use personal protection pistol — from loading and carrying, to shooting and cleaning.

“Throughout the development process, we focused on key areas that customers told us were important — the ease of racking the slide and loading the magazine. With that in mind, we reduced the amount of force required to rack the slide, and developed a magazine that is both easy and efficient to load. We have incorporated both of these new features into the M&P380 Shield EZ pistol. The new M&P380 Shield EZ pistol provides an easy-to-use personal protection option for both first-time shooters and experienced handgunners alike.”

Woodard said the new EZ pistol is part of the M&P M2.0 family and features an 8+1 round capacity and a 3.675-inch barrel.

“Gun Tests readers don’t like when a gun they’ve purchased comes with only one magazine,” Woodard said, “so we’re glad to see the M&P380 Shield EZ pistol ships with two 8-round magazines. Other features our readers generally favor include load-assist buttons on the magazines as well as a Picatinny rail to accommodate accessories. In previous tests of small 380 pistols, we’ve found rail-mounted lasers vastly improve accuracy results.”

The pistol also features an 18-degree grip angle, white-dot front and adjustable white-dot rear sights, and an MSRP of $399

“As a category, these small 380s generally have crappy triggers with long, heavy, indistinct releases, so we’ll take a hard look at Smith’s claim that the EZ has a ‘light, crisp trigger.’ We are actively lining up 380s for future tests,” Woodard said.