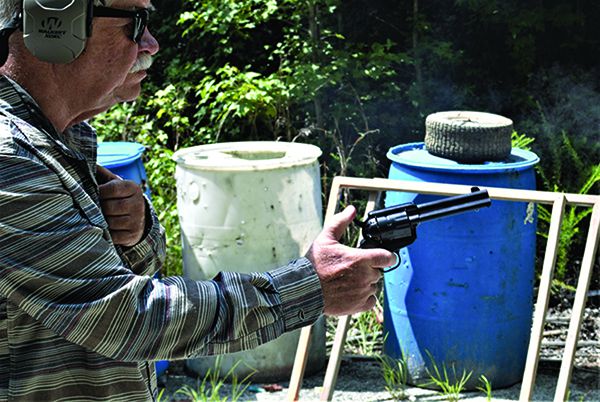 The Chiappa single-action revolver features a 10-shot cylinder. It is larger than two of the other revolvers tested because the Chiappa 1873 is closer to the Colt Single Action/Ruger New Vaquero frame size. Because the revolver is constructed of non-ferrous alloys, it remains light for the size. The Chiappa, then, may be said to have more of a genuine Old West feel to it since it is a full-size revolver. The grip feels good in the hand, and the revolver points reasonably well. The finish isn’t a deep, rich blue at all, but is instead some type of matte finish. While we did not expect much from a $170 handgun (our price at the time of the test), the finish is evenly applied and not unattractive. The grips are checkered plastic. The grips are the same size as a Colt Single Action Army. Some Colt grips will fit, but the locating pin isn’t in the same place.

The Chiappa is loaded by placing the hammer on half cock and opening the loading gate. The cylinder is indexed one chamber at a time. The cartridges are loaded, the gate shut, and the hammer moved to the rear and lowered. To fire the revolver, the hammer is cocked and the trigger pressed. The trigger has more travel than the other revolvers tested before it reaches the sear and drops the hammer, but it isn’t that bad a trigger overall. Trigger compression is 3.2 pounds. We like the trigger weight, but not the break.

While a 22 doesn’t recoil much, the 32.4-ounce 1873 22 doesn’t move at all when it is fired. The Chiappa barrel is a steel sleeve in a non-ferrous alloy cylinder. We hit a snag when we first began to load the Chiappa. The bullet nose would not start in four of the ten cylinders. After a bit of wiggling and work and loading the revolver a half dozen times, this unusual break-in problem disappeared.

The Chiappa 1873 isn’t a transfer-bar-equipped revolver. The firing pin is a floating type mounted in the frame. As s

uch, the revolver is not safe to carry fully loaded. While primarily a range gun and plinker, this advice must always be heeded. The old rule of making a revolver safe was modified in this case. The six-shot revolver demands that the hammer be placed on half cock, the first cartridge loaded, a chamber skipped, four cartridges loaded, and the hammer cocked. It will be lowered on an empty cylinder. This was modified with the ten-shot Chiappa 1873. We loaded one, skipped one, loaded eight and lowered the hammer on an empty chamber. Be certain to understand this technique and to never carry this revolver fully loaded. In comparison to the revolvers that may be carried fully loaded, the Chiappa was rated down a full grade. This may not be important for a plinker, but we feel that for a trail gun or small-game revolver and simple safety, this is important.

Firing tests were undertaken with three loadings. We used the Fiocchi 40-grain high-velocity round, Winchester’s 37-grain Super X hollowpoint, and the Federal Hunter Match. We elected to do two basic drills before accuracy testing. We would fire the revolvers as quickly as possible at 10 yards. This told us a lot about balance and the smoothness of the action. We fired more than 200 cartridges in this manner in each firearm. Next, we fired standing, offhand, at 15 yards, at small targets in a plinking situation. We fired minimum of 50 rounds in each revolver in this phase. Next, we fired the obligatory 25-yard benchrest firing test. Firing off hand, quickly, we used the Fiocchi load exclusively. The Chiappa 1873 is smooth enough when shooting offhand, with an easy-cocking hammer and smooth trigger. During the plinking and accuracy stages, however, we noted that the revolver fired low and to the left. This isn’t easy to fix. As one of the gunsmiths on the team noted, he would never attempt to move the barrel of a zinc-alloy-frame revolver, and you cannot bend the sight. You may file a sight to raise the point of impact. Despite these shortcomings, the revolver was reasonably accurate. Fired from the benchrest at 25 yards, the Chiappa 1873 produced five-shot groups of 3 to 4 inches. This is no more than plinking accuracy. The Chiappa was rated down a half grade as a result.

Our Team Said: In the end, we liked the Chiappa. It felt good and pointed well. It is an acceptable plinker. We used Kentucky windage, holding over and to the right, to get hits. We would not buy this revolver if the Heritage, Traditions, and Ruger models were available.