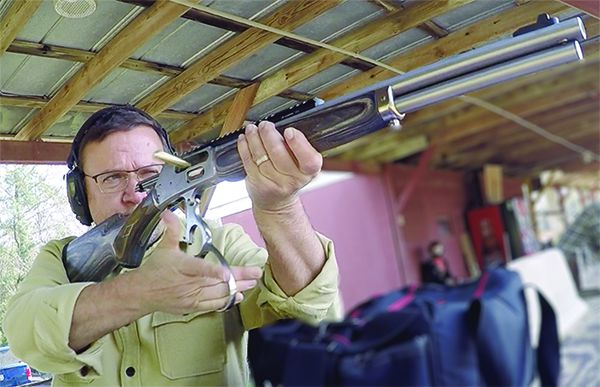 Gun Tests Grade: A (Our PICK)

This was a recent price at BudsGunShop.com. The Marlin 1895SBL debuted in 2009 and is based on the Marlin 1895 rifle, which was introduced in 1972. The Model 1895 evolved from the Marlin 1881, which was the first lever-action 45-70, predating the Winchester Model 1886 by five years. The 1881 was a top-eject rifle. Then Marlin began producing side-ejecting rifles in 1894 with the Model 1894. The design has been proven in the field and, as stated, has yielded many model variants, including the 1895 platform. In 1998, Marlin developed a short, compact carbine with a 18.5-inch ported barrel, three-quarter-length magazine tube, and straight-grip stock and dubbed it the Guide Gun. The 1895SBL (Stainless Black Laminate) was derived from the Guide Gun concept.

Out of the box, this is a sharp, modern-looking rifle sporting an oversized lever loop, a two-piece black/gray laminated wood stock with clean-cut diamond-pattern checkering on the semi beavertail forend and polymer-capped pistol grip. The butt is nicely fitted with a soft 0.75-inch-thick Pachmayr Decelerator pad. The natural stainless metal has a soft satiny luster. The stock also features sling swivel studs, which we appreciate in a hunting rifle.

The 1895SBL has a 18.5-inch-long barrel topped with an XS Systems Ghost Ring rear sight mounted on a long XS Systems Lever Rail optics platform. The 11.25-inch Weaver-style base offers a lot of flexibility in mounting an optic from the traditional spot on top of the receiver to a forward-mount scout-rifle-style placement. We really appreciated the sight- and optic-mounting options. Interestingly, the Marlin had the longest sight radius of the rifles tested. The stainless-steel barrel is rifled with deep-cut Ballard-type rifling with six grooves so it will shoot cast bullets as well as jacketed bullets.

The 1895SBL also features the manual crossbolt hammer-block safety, which Marlin made standard in 1984. One thing to note: With the hammer fully cocked and the safety on, you can pull the trigger to release the hammer and it will stop at half cock and not hit the firing pin. It also has three additional significant safety features. One is a two-piece firing pin, where the rear section of the pin drops out of alignment with the front until the locking bolt is fully engaged. Second is a trigger block that prevents the trigger from being squeezed until the lever is fully closed. We noticed this trigger safety block was easy to engage with the lever. And third is a traditional half-cock hammer-safety position.

In hand, the 1895SBL offers quick handling and great balance. The slight drop at the comb of the pistol-grip stock was very comfortable and offered a good cheek weld. The Pachmayr Decelerator pad really worked to tame the 45-70. Loading the large 45-70 cartridges was not a chore with the Marlin. It has a magazine capacity of six rounds, and cycling the oversized loop was smooth and very comfortable, with plenty of room for a gloved hand. Empty brass is flung to the right of the user. We did note the oversized loop increased the lever stroke. The loop edges were smooth. In fact, the Marlin had the longest stroke of all the rifles. It was also the smoothest-cycling rifle tested, our shooters said. The Taylor’s was a close second, and the Henry was a distant third.

Our best three-shot groups were nearly tied, with the Hornady 250-grain FTX load and the Winchester Super-X with the 300-grain JHP at 1.79 and 1.71 inches, respectively. Across all ammo tested, average groups ranged from 2 to 3 inches. This is another accurate rifle. The 8-pound weight and soft recoil pad helped users manage recoil.

The hammer was easy to cock rearward or hold in place on half cock. The fine serrations on the hammer spur offered good texture, and the hammer is machined to accept a hammer extension in the case you mount a scope above the receiver. The trigger broke at a clean 5.7 pounds on average. The Marlin had the best trigger of the big-bore bunch, we thought.

The peep rear sight and the post front were easy to use. The front sight is black with a white line along the face. It was fast to acquire and get on target. The forend filled your hand and was comfortable, with good texture. We did note the Marlin had a LOP of 13.5 inches, which is great when shooting while wearing a thick hunting coat, but that shorter LOP is also needed because of the oversized lever loop. The loop looks cool, but the compromise is a longer lever stroke.

Our Team Said: The Marlin 1895SBL is the modern evolution of the 45-70 hunting rifle. It offers great balance, six-shot magazine, comfortable oversized lever loop, and many optic mounting options. If you want a top-shelf modern 45-70 lever gun, this is your choice.

To collect accuracy data, we fired three-shot groups from a bench using a rest. Distance: 50 yards with open sights. We recorded velocities using a ProChrono digital chronograph set 15 feet from the muzzle.