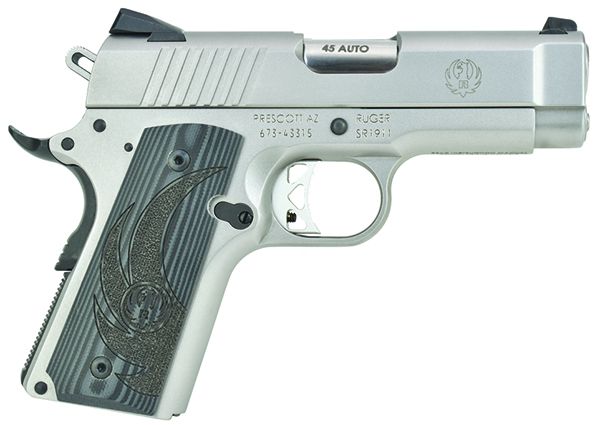 Well known (and justifiably so) for their 10/22s, single-action pistols, and 22 autos, as well as their centerfire rifles, Ruger got into the 1911 game a bit late — just about 100 years after Colt — but they have caught up in a big way. Not only did they take advantage of a century’s worth of engineering experience, they formed their own shooting team to wring their guns out in competition, a long practice in the shooting industry. Colt once sponsored Jerry Barnhart. S&W fields such top talent as Jerry Miculek and Julie Golob. SIG Sauer has the services of Max Michel and Lena Miculek. For their part, Ruger brought in such greats as Doug Koenig and Maggie Reese. Just like technology developed for space travel made it into our homes and parts engineered for NASCAR speedsters were eventually used in our personal cars, parts, tools, and techniques developed for shooting competition eventually wind up in our EDC guns.

Just take a look at some of the parts on the Ruger SR1911 and compare them to parts Koenig designed years ago, and you can instantly see his influence. Ruger has developed/pioneered particular expertise in the areas of cast and MIM (metal injection molding) parts. Extensive use of these in the SR1911, with its cast frame to go along with many MIM internal parts, can bring you a good pistol produced using very modern manufacturing methods.

The Ruger SR1911 is also made of stainless steel, and they decided to leave this one with a more natural finish. And with the SR1911, the frame is also stainless steel — not aluminum. The metal has been bead-blasted. Edges have been nicely melted, leaving very few lines or points on which to cut a hand as the shooter manipulates the pistol. As with the Colt Defender, the nose of the slide has been beveled, giving a distinctive look to a pistol that should be easier to reholster. Diagonal grasping grooves are located at the rear of the slide only. The ejection port has been opened and tear-dropped.

The SR1911 uses a 70 Series firing pin set up instead of an 80 Series. Back in the day, there was concern that a 1911 could be dropped on the muzzle, causing the firing pin to move forward on impact. That could cause said firing pin to strike the primer, thereby firing the pistol. In the current litigious world, that would never do. There were a couple of solutions designed (one activated by the trigger and another by the grip safety), both of which would require something to be depressed before the firing pin could be released for forward travel. Colt adopted the trigger-activated system and incorporated that in the 80 Series update on their 1911s. It is a good system and works well — please note that it is also the system used on the Smith and SIG pistols in this test. It also adds a series of linkages and a plunger that must be depressed, all of which detract a bit from the potentially superb 1911 trigger. The parts obviously don’t ruin the process, but a little bit of additional take-up is required before the trigger is activated, and the shooter can feel that in the trigger. Leaving the trigger unrestrained was not an option, so an additional system was designed that uses a lightweight, frequently titanium, firing pin and an extra strength firing-pin spring. The combination prevents the firing pin from moving forward from the forces generated by a drop on the muzzle. Trigger compression feels like it should. Lawyers and shooters are happy. To repeat, Ruger uses the 70 Series system.

The 3.6-inch barrel on the Ruger is a solid cone shape that flares at the muzzle end. It is fully ramped and has a small slot cut into the hood that can act as a witness hole to check the status of the chamber — loaded or not. The dual, nested recoil spring is supported by a full-length guide rod. Final machining inside the slide was excellent, with almost no machine marks showing at all. The hammer is a classic Doug Koenig design. The trigger is skeletonized to lighten weight and includes an overtravel screw. The front strap on the frame is smooth, and the magazine well has been beveled.

Small parts are all finished in a matte black. The mainspring housing is polymer and comes with what closely resembles checkering. The grip safety, thumb safety, slide release, magazine catch, and grip screws are all black. The Ruger SR1911 also has Novak or Novak-style sights. The ones on the Ruger are of a three-dot type, and the rear sight is drift-adjustable for windage. Grip panels are a two-tone gray laminate sporting a racy Ruger logo and minimal checkering.

If you are trying to get a small 45 and still mitigate the recoil where possible, the Ruger may be your best choice. The all-steel construction and slightly longer slide-barrel combo resulted in the softest recoil impulse of these test guns, in our opinion. The Ruger’s favorite fodder was the Hornady 185-grain Critical Defense.

Our Team Said: The Ruger was good at everything, but not the best at anything.

We tested at American Shooting Centers (AMShootCenters.com) in west Houston. Muzzle velocities were determined via a LabRadar chronograph (MyLabRadar.com, $559). All shots for group were fired at 15 yards from a well-sandbagged Caldwell Pistol Rest from MidwayUSA (MidwayUSA.com) and aided by a mini-DRC Fortune Cookie bag from Wiebad.com. We used a Total Eclipse holster from Blade-Tech.com for offhand speed drills. We modified it a bit to fit the smaller pistols.