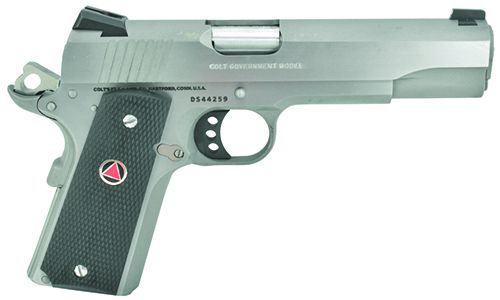 We won’t call the look two-tone, but the Colt Delta Elite 10mm is a beautiful contrast of finishes. Flat surfaces on the pistol are a smooth, brushed finish with all curved or cast parts showing a bead-blasted look. The lines on the frame and slide delineating the two are sharp and just about perfect.

The slide is the standard Government Model profile and should fit just about any normal holster. Sights are black three-dot Novaks, mounted in dovetails. The front sight on our sample measured 0.125 inch wide. That is just a bit narrower than some we have seen lately. We liked the extra light visible around the sight. Seven slanted grooves have been milled into the rear of the slide as cocking serrations. They appear to be angled at about the same 11 degrees John Moses Browning decided on for his grip. The ejection port has been opened and lowered (as compared to earlier models) with a teardrop cut near the extractor, all of which is done to assist in the ejection of loaded rounds and empty brass.

This is an 80-Series 1911, so the firing-pin safety and all the levers that go with that are present. Those parts tend to heavy up the trigger pull and make the movement feel a bit less crisp. They are easy to remove, but we absolutely do not recommend removing or disabling safeties on a firearm. The parts also tend to mate in with usage and the trigger improves. We call it a “1000-round trigger job.” 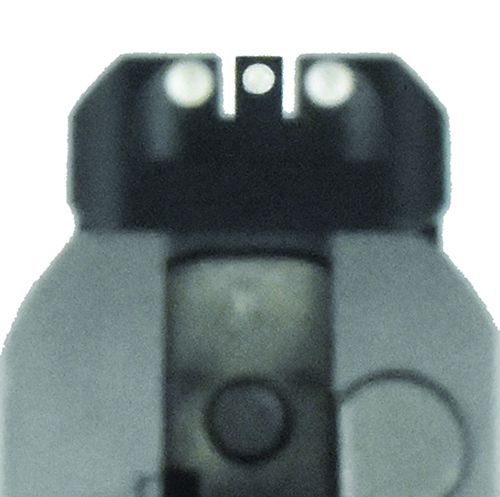 The Colt Delta Elite’s three-dot sights helped us shoot it consistently, with all groups averaging under 2 inches at 15 yards.

The smooth Colt frame was easy on the hands with powerful loads. 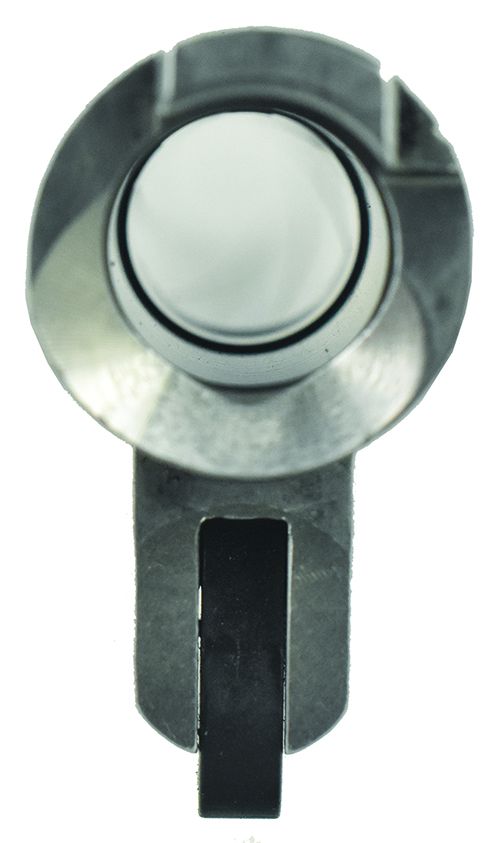 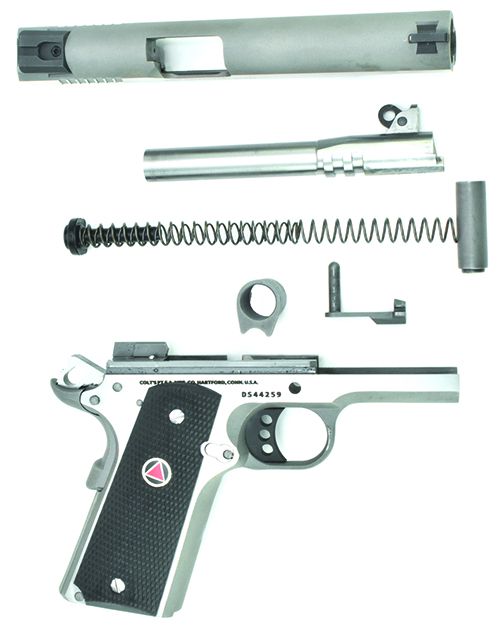 The Colt barrel was well fitted and displays no movement when we pressed on the hood of the barrel. The bushing is tight enough that a bushing wrench comes in very handy. The slide returns to battery using a pair of heavy, nested recoil springs.

The barrel has been well fitted and displays no movement when we pressed on the hood of the barrel. The bushing is tight enough that a bushing wrench comes in very handy. The feed ramp on the barrel sports an interesting profile in that it is not symmetric. The ramp is actually relieved a bit higher on the left side than the right. The edge of the chamber throat is a bit sharp but has been opened just a hair at the 6 o’clock position to help ease in the nose of the bullet. The slide returns to battery using a pair of heavy, nested recoil springs. The recoil-spring guide rod was unique to us in that it appeared to be two metal pieces sandwiching a polymer buffer. The interior of the slide was very clean with no visible tool marks. Slide-to-frame fit was excellent with very little lateral movement possible. The extractor hook is internal, as per the original design.

The frame is an example of enough without too much. The beavertail grip safety sits high, is well-rounded and is built up with a good memory pad. The thumb safety is big enough to operate well without being obtrusive. The grip frame was cut up high behind the trigger guard to allow the shooter’s hand to grip as high as possible. The magazine well shows a nice bevel job to help with magazine changes. The front strap is smooth. The mainspring housing is a vertically-serrated polymer unit. The trigger is matte black and made of aluminum. Take up and overtravel were only about 0.125 inch, and required compression averaged 4.6 pounds, with about 0.3-pound standard deviation. The black composite grip panels displayed the black, silver and red Delta medallion. As with the slide, machine work on the frame was very good.

The Delta Elite shot everything we tried to feed it and did so pretty consistently, with all groups averaging less than 2 inches at 15 yards. We think this would be a great handgun to carry on a hunt into the mountains or the brush.

Our Team Said: The Delta Elite did not have all the bells and whistles that the SIG Tacops did. But when we were firing several hundreds of rounds in a day and then finishing with the Buffalo Bore stompers, we were just fine with the Elite’s smooth front strap. 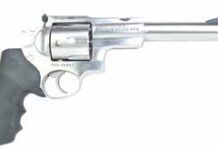 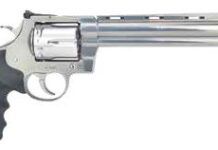 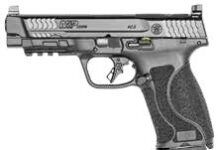