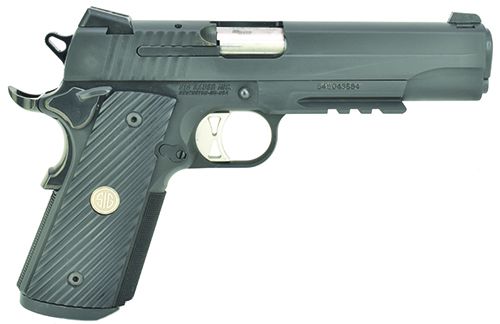 Recent SIG Sauer 1911s tend to be a bit different. The slide is not mil-spec nor is the muzzle. When you order a holster for a SIG 1911, make sure you tell them it is a SIG, because they don’t fit in tight standard rigs. Our Tacops sample is no different. Easily visible when viewed from the muzzle, the radiused edge on the top of the slide is flared out a bit more than just about everyone else’s. Then the top half of the sides of the slide is dished out. All of this makes for a very distinctive look. The dust cover on the Tacops model is reinforced and then milled out as a Picatinny rail. Three slots give room to mount just about anything desired. Add in an external extractor, and you could tell who made this pistol with your eyes closed.

Our sample came with a 5-inch fully-ramped match-quality barrel showing a well-recessed crown. For use with a higher intensity cartridge like the 10mm, we like the extra support the ramp provides. As with the Colt Delta Elite, slide-to-barrel fit was very tight. The slide and frame on the Tacops are both stainless steel with a matte-black nitride finish. The slide mounts excellent Novak-style Siglite night sights both front and rear. Diagonal grasping grooves are located at the rear of the slide only, but there is plenty of space at the front of the slide available to be used for press checks. The frame is undercut to allow the shooter’s hand to sit as high as possible in the grip and reduce recoil a bit. The front strap and the mainspring housing are checkered at what appears to be 30 lines per inch. We remember when all of this kind of checkering was done by hand. We remember when we were pretty good at it. We don’t remember our checkering ever being this precise. The lines and the edges are just about perfect. As on the earlier 45, our 10mm Tacops ships with an extended magazine well. This creates a bit more length and more of a funnel effect to the mag well, allowing faster reloads. A big of extra recoil does not disqualify a firearm for use as a high-speed fighting pistol, and the SIG is certainly set up for it.

While everything else on the pistol except the barrel and the trigger are a matte black, the controls are more of a polished black, making a nice contrast in colors. The manual thumb safety is ambidextrous and a little larger than mil-spec, but operating surfaces are not all that large. That being said, we did not have any trouble operating the safety properly. The high-rise beavertail safety has a larger-than-average “Memory Pad” on it that can perhaps forgive some less than perfect grips. The trigger is skeletonized aluminum and very crisp within the slight limitations of an 80-series type firing-pin safety. Initial take-up and overtravel during trigger compression were both only about 0.125 inch. Trigger movement required was right at 4 pounds pressure. 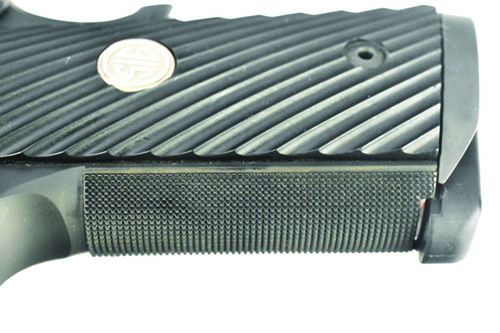 The checkering on the SIG was first class. All in all, the fit and finish of this pistol was very good. Production pistols keep getting tighter. 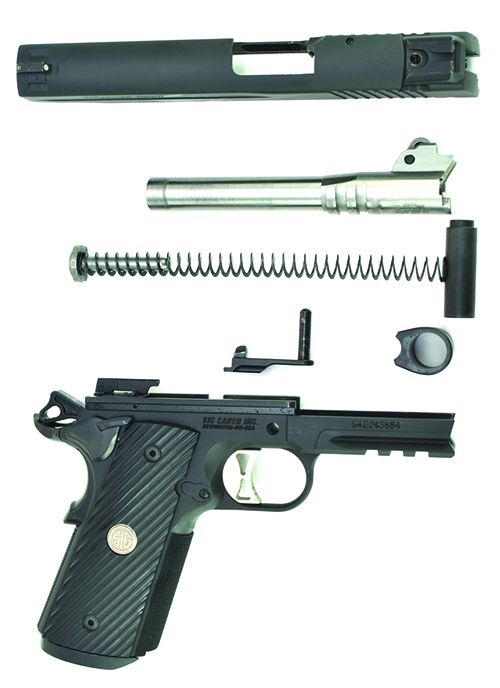 The radiused edge on the top of the SIG’s slide is flared out, then the top half of the sides of the slide is dished out. The dust cover on the Tacops is reinforced and then milled out as a Picatinny rail. The barrel is a 5-inch fully-ramped match-quality unit with a well-recessed crown. 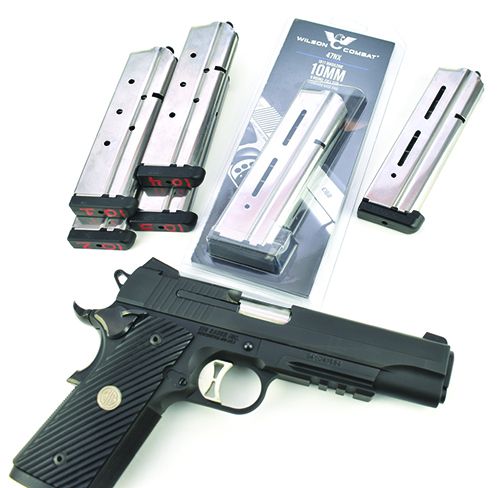 The SIG pistol ships with four highly polished eight-round magazines. We could get nine rounds in the mag, but then it would not seat with the slide forward, so we settled for eight. All loaded and fed well. We also tried out some Wilson Combat nine-round magazines we had on both the SIG and the Colt. All worked well. 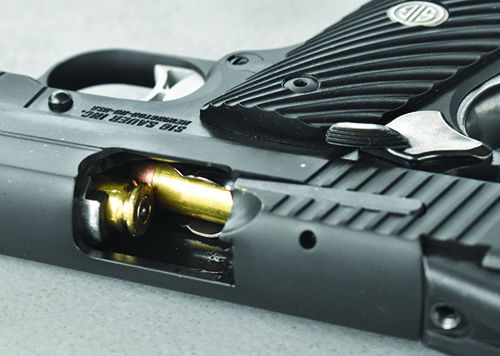 With the SIG, we had frequent failures to extract with the Magtech rounds and reloads. The Remington and Buffalo Bore ammo also had a couple of problems in the gun. Then SIG replaced the extractor, and the pistol ran flawlessly. We were very impressed with the prompt response of SIG’s customer service. 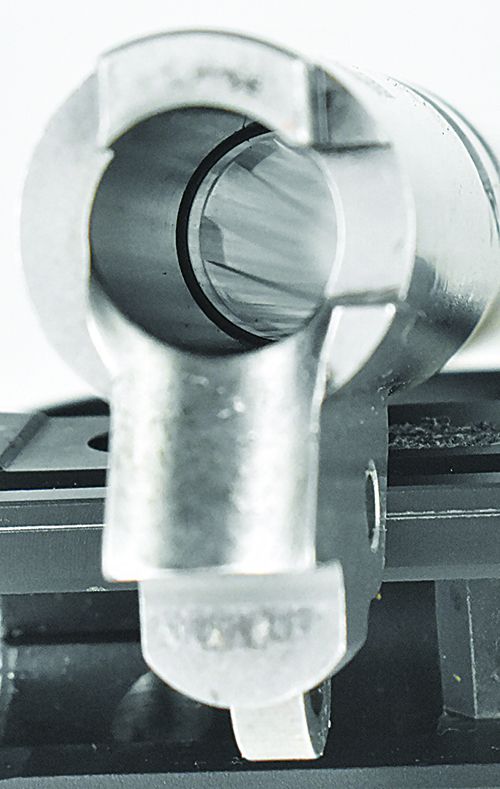 The SIG provides a little more support for the 10mm cartridge with a fully ramped barrel. 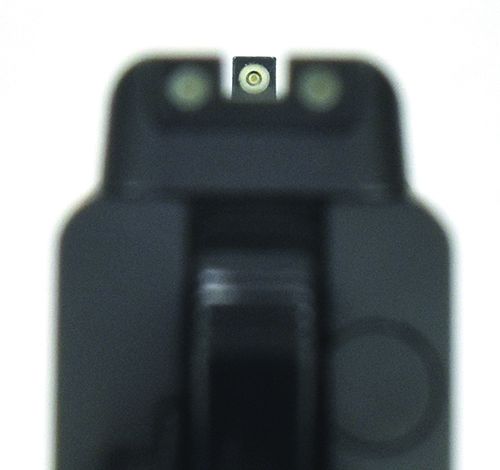 The Tacops has excellent Novak-style Siglite night sights both front and rear.

The pistol ships with four highly polished eight-round magazines. We could get nine rounds in the mag, but then it would not seat with the slide forward, so we settled for eight. All loaded and fed well. We also tried out some Wilson Combat nine-round magazines we had on both the SIG and the Colt. All worked well. At first glimpse, we thought that the grip panels might be G10 laminate but, upon removal, we confirmed they were plastic with a nice SIG logo centered therein. Diagonal grooves are molded into the panels that seemed a bit sharp to us for use in an extended shooting, but then didn’t actually pose any problems during the shooting session.

The SIG Tacops was the most accurate of the semi-autos we tested in this group, but function was spotty early on. We had fairly consistent extraction issues in which the empty case would stay in the chamber as the slide cycled to the rear. This happened primarily with Magtech ammo and good reloaded ammunition. The Remington and Buffalo Bore ammo worked almost all the time, but we wouldn’t settle for that. We contacted SIG. Within 10 days of reaching out to them, our Tacops had been repaired and returned to us. We then put more than 200 rounds through it where it worked perfectly. Turned out to be a simple extractor issue. Our hats are off to SIG for their energy and interest in making this problem right. As we always say, test any and all new firearms before you bet your life or the hunt of a lifetime on them.

Our Team Said: This pistol comes with an impressive list of features and was very accurate, but it had extraction issues — which SIG Sauer then did an incredible job of fixing, so we added another half grade to the marks for the repaired pistol for their customer service.