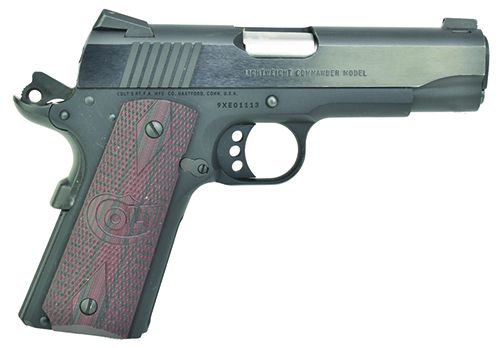 The Colt 1911 pistol has a very storied past and the history on this particular model is no different. In 1951 various solutions were proposed when the Army requested a replacement for the 1911 chambered in 45 ACP. Since all NATO members were using 9mm for their pistols, our military wanted to comply as well. Requirements also included limiting length to no more than 7 inches and weight to no more than 25 ounces. Accordingly, Colt submitted a 1911 pistol chambered in 9mm with a 4.25-inch barrel and an aluminum frame. Eventually, the Army decided to stick with the small arms they had, but Colt thought they had a winner on their hands and introduced the new pistol to the public. Colt introduced the all-steel commander in 1970, requiring a difference in nomenclature. The all-steel version has since been known as the “Combat Commander” and the aluminum-framed version became the “Lightweight Commander.” Both have indeed been major successes for Colt over the years.

We have documented upgrades being made to many 1911s over the course of this article. Our Colt LW Commander also sports the better sights, beavertail with memory bump, rounded hammer, better trigger, better thumb safety, etc. Our sample has the flat mainspring housing with vertical serrations, as does the frontstrap. The magazine well has the least improvement on it of any we tested here, showing just a light bevel on some of the well. We felt the pistol balanced the best of the four pistols tested. The trigger was excellent and the sights more than sufficient. While not the highly polished slides of 50 years ago, the flats of the slides were smooth and the lines were sharp, with no visible tool marks on the pistol. Colt has learned a few things about making this pistol. Except three things that really disappointed us. First was the barrel. One of the tests for potential accuracy in a 1911 is to push down on the hood of the barrel. Movement is a bad thing. It means the barrel has not been fitted all that tightly to the slide and frame. The hood on our sample moves a good bit. The barrel and its setup were causes of additional concern. Most modern 1911 barrels are ramped and polished all along the lower radius of the barrel mouth. This aids in feeding ammunition other than standard full metal jacket. The Colt 1911 was not polished at all and showed a very narrow ramp, which proved problematic in some of the ammunition we used for testing. This pistol almost refused to feed Black Hills Honey Badger ammo, which has worked fine in every other pistol tested. A ramp and throat job, which widens and polishes the feed ramp, can easily be done by a competent gunsmith. Do not try it with your Dremel tool. The angles and surfaces are critical in proper feeding. 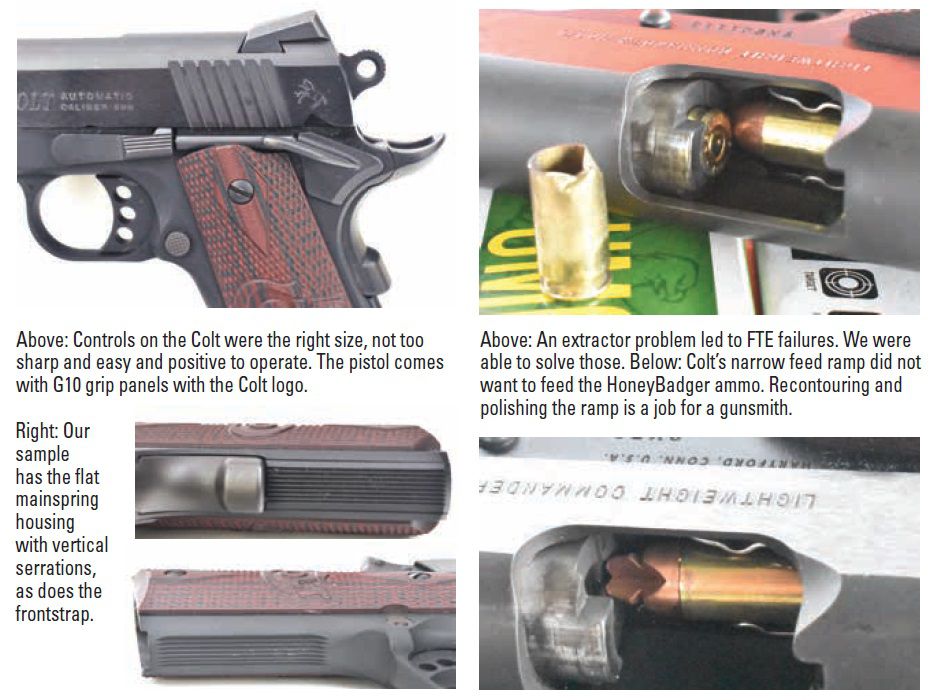 Next, problems may develop (note we said may, not will) on alloy-framed semi-automatic pistols where the feed ramp to the barrel is also alloy. The metal in the bullets can be harder than the alloy ramp and may damage the ramp over time. Many manufacturers have solved this problem via a simple solution: use a barrel with a steel feed ramp that is part of the barrel and then mill the frame to allow the differently shaped barrel to sit where it needs to go. Then every bullet being pushed forward out of the magazine impacts into the steel ramp instead of a softer alloy ramp. The other two alloy pistols in this test (Ruger and Springfield) use this system. Even the steel-framed Taurus uses this system. The Colt does not. Last is the extractor. This is the hook that pulls a cartridge (loaded or fired) from the chamber, back into the ejector (projection on the other side of the frame), which then pushes the cartridge or case out of the ejection port. Signs of an improperly tuned extractor include empty cases being left in the chamber after firing. While the other three pistols worked flawlessly, our Colt started leaving empties in the chamber, causing a double-feed. This virtually new pistol belonged to a somewhat chagrined member of our test team, so we felt a bit freer to experiment with his gun. We checked the extractor only to find that we could wiggle the extractor hook as it protrudes from the breech face. That is a bad sign. We removed the extractor and put some tension on it then reinstalled. It worked perfectly from that point on.

Our Team Said: We got average accuracy from this pistol, we think, because of the somewhat poorly fitted barrel. We worry about the long-time viability for a heavily used 1911 with a non-ramped frame. We fixed the extractor quickly. We feel that we should not have had to. Colt makes an outstanding firearm. They have also had 70 years to work the kinks out of this one. The other three firearms we tested in this group already employ the new production methods eliminating the three problems. We are disappointed Colt has not yet decided to do so. Finally, we must ask whether we blaspheme by the mere suggestion that one of JMB’s most incredible creations could function properly while chambered in a “minor” caliber. We think we are still pious. Will a 9mm ever equal a 45 ACP shot to shot? No. But the energy figures for a fast 9mm come very close to some of those big, slow 45s. Sometimes they exceed them. And how could having a greater number of an effective, less expensive, lighter-recoiling cartridge in the outstanding 1911 platform be a bad idea? If it were us, we’d buy a Ruger Light Weight Commander and see if we liked it for self- or home-defense.