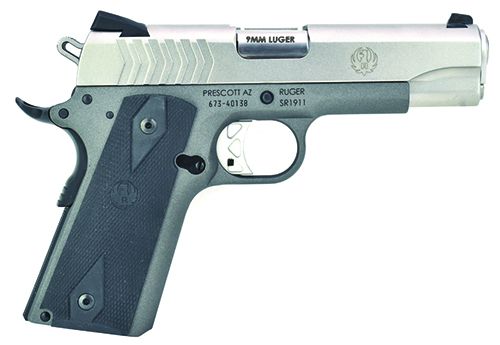 Ruger introduced the SR 1911 in 2011 and has since added many calibers and variants to that product line. We wanted the Light Weight stainless-steel Com­mander version for our tests. It boasts a 4.25-inch fully ramped barrel in a stainless-steel slide mounted to a gray anodized-aluminum frame. Grip panels are black and rubberized. They, along with the matte-black controls, provide a nice three-tone look to the pistol.

The thumb safety is oversized but has been rounded off so there are no sharp edges. The grip safety has a good memory bump and, more important, works when engaged then disengages easily. No death grip is required to shoot this pistol. Barrel lock up in the slide is rock solid. The bushing is pleasingly easy to rotate (we could disassemble the pistol without a bushing wrench) for what turned out to be a very accurate pistol. The mainspring housing is checkered and the front strap is smooth. The ejection port has been properly lowered and slightly relieved at the rear. The SR1911 also uses a “70 Series” firing-pin setup. This eschews the use of a firing pin safety (thus removing the requirement for more moving parts and a slightly heavier trigger), utilizing instead a titanium firing pin and a different firing-pin spring. Fewer moving parts and a better trigger pull while maintaining safety is a good thing. The barrel hood is notched at the rear, allowing a small view port to check for a loaded chamber. There are cocking serrations on the rear of the slide only. The magazine well has been properly beveled. The 3-dot sights are genuine Novak and set in drift-adjustable dovetails. 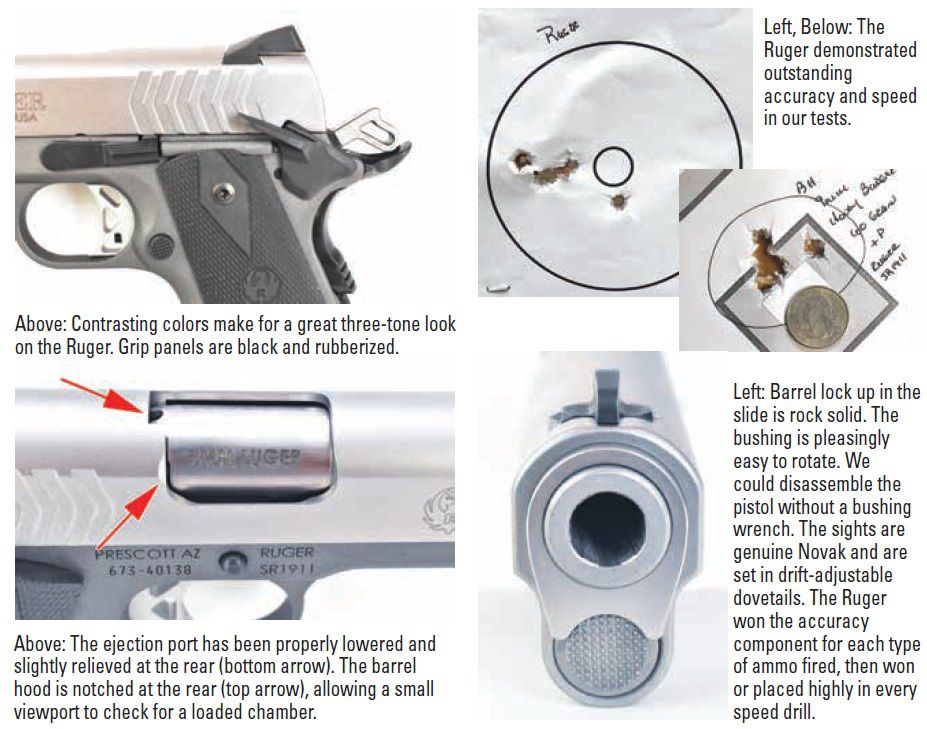 The current batch of polymer pistols bring many advantages over some of the old-style pistols. They can also bring their own issues. One of those can start with mainsprings. Many new-model pistols use a single spring to create pressure against the trigger and the striker. The 1911s employ a separate mainspring to power the hammer, a leaf spring to return the trigger and a third spring to return the slide to battery. This allows those with smaller hands or diminished grips to set those springs one at a time. The shooter can cock the hammer and then rack the slide, separately using less effort. The Ruger SR1911 uses an approach to springs opposite of that of the Taurus, in that the recoil spring is lighter than the others tested though it still functioned perfectly. This makes the slide easier to rack while also being a prime factor in making the Ruger feel like it had lighter recoil.

Our Team Said: The Ruger won the accuracy component for each type of ammo fired, then won or placed highly in every speed drill. It had the best trigger and the lightest perceived recoil in this test group. We were impressed.