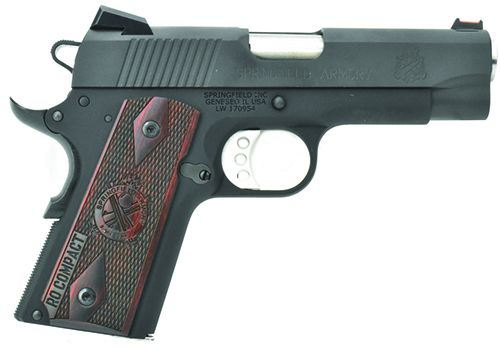 Besides Colt, the 1911 competition market has been well supported and well served by Springfield Armory. The company offers an array of 1911s running the gamut from absolute basic mil-spec to full-blown race guns, so we just had to have one of Springfield’s 9mms for our test. We chose the lightweight Range Officer Compact, which comes in a very desirable configuration. Namely, a 4-inch Commander-length slide mated to a shorter (think Colt Officer’s Model) frame. The result is a slightly muzzle heavy, yet very concealable pistol.

The RO Compact has almost everything you could ask for. The alloy frame, steel slide, and all the controls except the trigger are a matte black. The trigger is brushed aluminum which, along with the polished barrel, make for nice contrasts to the black. The barrel is different in another way — it is a bull barrel (larger diameter) that uses a bushingless lockup. The barrel is built up at the muzzle and is fitted straight to the slide. It requires a reverse spring plug and a takedown pin, which is provided with the pistol. Movement of the barrel hood within the slide is virtually nil and speaks well for the craftsmanship in the pistol. The grip panels are slightly thinner than the normally slim 1911 grips and would project just that much less when concealed. The grip safety had the needed memory bump, though it wanted to release just a little bit later than we prefer. The mainspring housing is checkered, but the front strap is smooth. The magwell is properly beveled and was easy to reload into. The thumb safety was substantially larger than mil-spec but not large enough to be obnoxious. The required trigger compression was smooth and consistent. This pistol performed and shot well through all tests. We really liked the muzzle-heavy feel when we started doing the speed trials. The front sight is a very visible fiber optic, and the rear is a Novak style with two white dots. Both are set in dovetails. A replacement fiber-optic tube is included in the case along with the takedown pin. 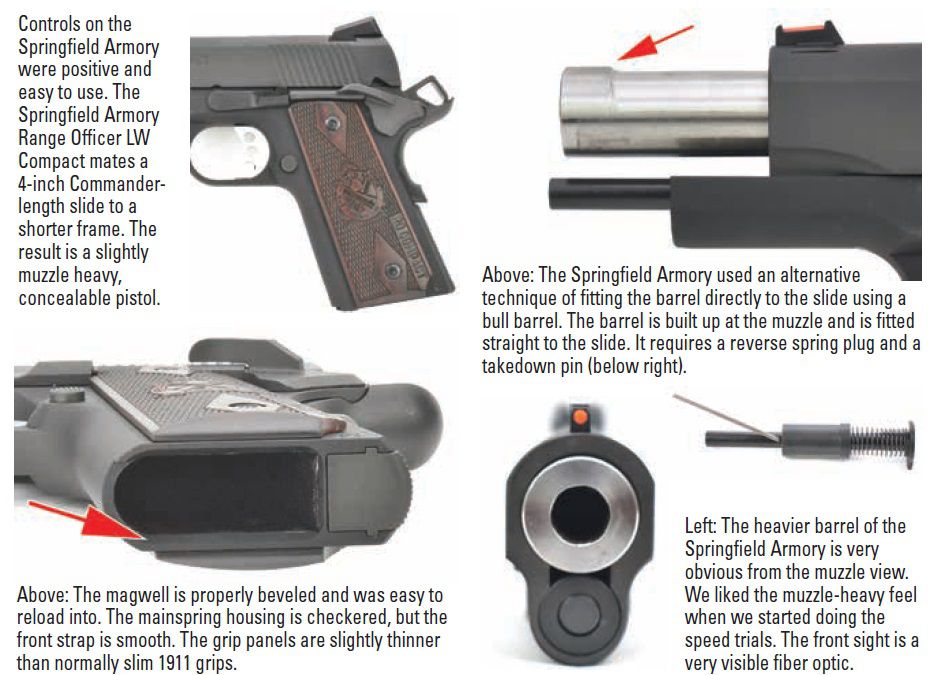 About the only problems we had came from the sights. Everything shot high and left. A couple of inches too high doesn’t concern us, but the RO Com­pact was shooting some ammo as much as 6 inches too high. And this was across the board, using several different brands and weights of ammunition. We weren’t having the same problems with other pistols that day, so it doesn’t appear to be just the testers. We think Springfield Armory should verify the height needed for this sight. We also remind our readers to test fire every firearm they purchase — especially for self-defense — and to ascertain the gun’s point of impact with whatever ammunition they choose.

Our Team Said: The RO is a smooth-shooting pistol, full of features at a reasonable price. Our only knock was the front sight.