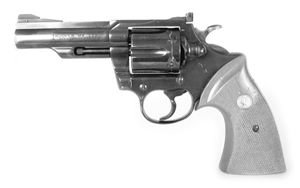 The Colt Trooper was made from 1953 to 1969. The Trooper Mark III superceded the previous Trooper and had a redesigned lock mechanism. It was manufactured from 1969 to 1983 in blue and nickel finish with 4-, 6-, and 8-inch barrel lengths. The Colt Trooper III in our test was made in 1974.

The Colt Trooper Mark III is for all practical purposes the working man’s Python. Sound good? It features a serrated front sight pinned in place. The rear sight is fully adjustable, and it should be more durable than similar designs since the rear notch moves back and forth inside a protective frame. While adjustment for elevation is clockwise for down and counter-clockwise for up, the windage adjustment is reversed. Turn it to the right if you want the point of impact to move left, and turn left to bring the POI to the right.

Another feature is the direction in which the cylinder rotates. While other revolvers move counterclockwise, expecting a Colt to go bang requires the first round to be in the 11 o’clock position prior to cycling. Also, to release the cylinder one pulls rather than pushes on the latch.

The Colt Trooper weighed the most, and as expected, produced the least felt recoil. While the 110-grain Winchester JHP was flashy and produced the lightest recoil all around, the Trooper tended to smother muzzle flip from each round across the board. Double-action trigger pull was very heavy (15.5 pounds), but this was not as noticeable when fired unsupported as from a rest. The resistance of initial take up is multiplied as the shooter reaches the end of the stroke. This has been commonly referred to as “stacking,” which is commonly associated with a coiled mainspring design. The single-action proved nearly as heavy as the double-action, which is unique in our test experience (12.5 pounds). But, the weight of the SA press, which was also desirably solid in feel, did not detract from our accuracy. The face of the trigger was wide, without serration and properly radiused. This last detail is not to be taken for granted, and it’s indicative of the extra time put into the construction of this revolver.

We are sure each of these actions could be lightened considerably, but bear in mind that while heavy, the action was very smooth without even a hint of grit, delay, or stumble. In fact the general condition of this weapon was quite good. We doubt this gun was likely fired only a couple of times and then put away. Wear on its blued finish was primarily at the muzzle – a classic sign of holster wear.

Each of our test revolvers featured a wood grip (walnut), but only the Colt and Smith &Wesson models offer the older design wherein the grip is wider at the bottom. The Colt grip was cut with a diamond pattern and the backstrap was exposed. The ejector rod was fully shrouded with an extra contour for the tip.

Our only mechanical irregularity throughout the test involved the Colt’ Troopers ejector rod backing out. This could be fixed with a carefully applied drop of Loctite.

In terms of accuracy, the Colt Trooper, like the other two guns, averaged five-shot groups approximately 2.5 inches in diameter with the 110-grain Winchester cartridge. Variation in group size was actually rather small. Likewise, all three guns shot the Black Hills 125- and 158-grain JHP rounds even better. Our Trooper preferred the 125-grain round, with a best single group measuring 1.4 inches for an average of 1.7 inches. Overall, our old Colt Trooper Mark III averaged 2.1-inch groups for all shots fired regardless of cartridge. Muzzle energy from our Trooper Mark III ranged from 419 to 519 foot-pounds. Checking our data from a test we did of sub-compact .45 ACP pistols (November 2001), the Trooper offers more muzzle energy with comparable capacity at one half to one quarter the price.