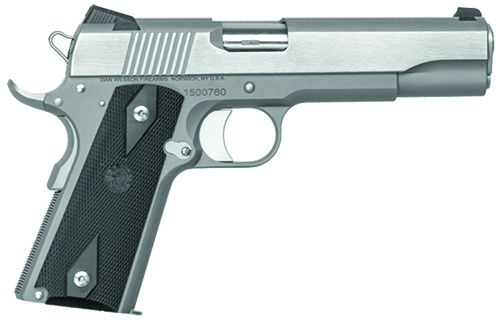 This was a recent price at BudsGunShop.com, but the SKU is showing out of stock as we went to press. The company website shows it was discontinued in 2019. The Dan Wesson Heritage is a stainless steel Government-Model-size handgun. The pistol is well made of good material, and it’s free from the billboard-size markings on the slide some of us do not care for. The slide features a raised rib with serrations. The pistol features excellent Novak-style sights. The front post contains a tritium dot; the rear sight is simply black. The pistol’s speed safety is well designed and seemed to be the largest and therefore easiest to operate quickly. The beavertail grip safety properly releases its hold on the trigger about halfway into compression.

A word on the beavertail safety: Some folks have no problem hitting the grip safety quickly, but some who use the popular thumbs-forward grip may find the palm forms a pocket that allows the grip safety to rise and deactivate the trigger. A beavertail grip safety with a memory bump cures this problem and funnels the grip properly, raising the hand and lowering the bore axis. We liked the Dan Wesson design. All of the pistols were equal as regards grip-safety design, with no clear preference. All controls featured a positive detent. Trigger compression is a crisp 5.5 pounds with the Heritage 1911. The trigger cannot be faulted, but it is also the heaviest of the test, according to the Lyman electronic trigger-pull gauge. The pistol does not have frontstrap checkering. The grips are austere for this type of handgun, a simple rubberized Hogue product. The Heritage is supplied with two eight-round magazines.

During the initial firing stage, the Heritage suffered a single failure to extract and a single short cycle in the first 50 rounds with the 200-grain LSWC loading. After these problems, there were no further malfunctions. Notably, these were the only malfunctions of any type during the test program in any of the handguns, save for a failure to lock open on the last shot with the Devil Dog handgun. The Dan Wesson pistol handled well. Recoil was not pronounced even with the +P loadings. Steel-frame 1911 45s are not a problem with standard loads. The controls were crisp and magazine changes were easily carried out. After the combat test, each handgun was carefully cleaned, lubricated, and checked for eccentric wear before firing for accuracy. The Heritage 1911 was none the worse for wear. The Dan Wesson Heritage turned in several 2.0-inch groups. 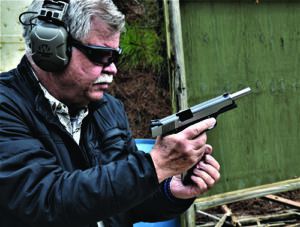 Our Team Said: The pistol is a good choice for most shooters, and while Dan Wesson terms it an entry-level handgun, it is as nice a handgun as most shooters would wish to own. We rated it down a half grade based on the early failures to cycle and extract some test ammo.