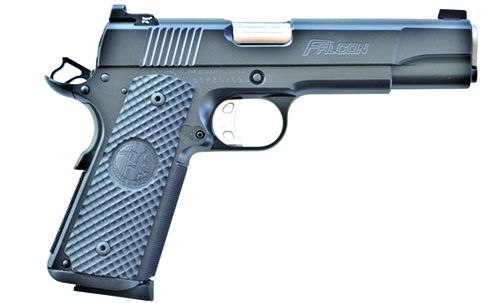 This was a recent ordering price direct from NighthawkCustom.com. The Falcon is a 5-inch-barrel Government Model-type 1911 without a frame rail. Among the Nighthawk’s features is a mainspring housing and magazine well custom built from tool steel and de-horned to prevent sharp edges. The forward portion of the slide has what Nighthawk calls High Power-type slide cuts. There are three ball-cut grooves in the top of the slide. The sights are Heinie Ledge types with the Straight Eight (stacked dots) tritium night-sight inserts, same as the Guncrafter. The grips are G10 and give the user plenty of adhesion and abrasion and are slightly thinner than some of the other grips tested. Most of the raters liked this design better than some of the thicker grips. The mainspring is checkered at 25 lines per inch (lpi), while the rear of the slide is checkered at 40 lpi to match the rear sight serrations. The barrel crown and smooth recoil spring plug present interesting architecture.

The pistol is de-horned for carry use. After all, no matter how expensive these handguns are, each was designed as a personal-defense handgun. The front strap is nicely checkered and features a high cut that lowers the bore axis. The slide stop is nubbed and the frame beveled in the same manner as the Guncrafter. The match-grade barrel features chamber flutes, which may make cleaning easier and are eye catching. The stainless barrel bushing is finger tight. and disassembly isn’t difficult. The trigger is very crisp, with a small take up before meeting 4.2 pounds of compression. The Nighthawk is supplied with two Act Mag magazines.

During the firing test, the Nighthawk never failed to feed, chamber, fire, or eject. Operation was flawless. We really like the sight design the Nighthawk shares with the Guncrafter. The High Power cut in the slide allows racking the slide as you would with forward cocking serrations. Perhaps not as sure, and perhaps that is not the intent, but some of us do not like the looks of forward cocking serrations. The Nighthawk Falcon’s performance on the combat firing line was the best of any of the handguns. The Nighthawk simply rained bullets into a tight group. We fired from standing, firing quickly at close range, and also from a braced barricade at longer ranges. Per our estimation, the Nighthawk Falcon was the most accurate in combat terms in firing off hand. The Guncrafter Industries 45 and the Springfield Loaded Operator were very close in this contest, but the Nighthawk pulled away from them to a larger degree as the target got smaller and the range was further.

Our Team Said: In the Nighthawk we found an exceptional handgun, without compromise, and without fault. The Nighthawk is worth the money, even better if you find one at a lower price.