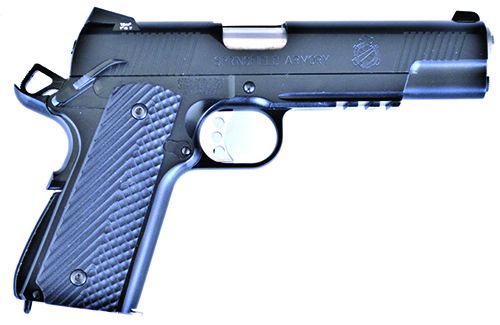 This was a recent price at TombstoneTactical.com. When ordering this handgun, a letter makes a difference. The ML pistol is supplied with Pachmayr grips, as an example. That’s fine if that is preferred, but our rater ordering the Loaded Operator with G10 grips, or LL. There are several Operators, some more expensive, including the TRP Operator with adjustable sights, the Marine Corps Operator, and the Long Beach (LB) Operator. The Operator designation identifies a pistol as a handgun with a light rail. The Springfield pistol features a nicely applied black Armory Kote finish.

It has an ambidextrous slide lock safety, beavertail safety, and the usual Springfield lightweight firing pin and heavy-duty firing-pin spring for drop safety. The slide is tightly fitted. The slide racks more like a TRP than a Loaded Model. The Springfield features Novak sights with three-dot tritium inserts. The pistol is supplied with a magazine well that aids in rapid magazine changes. When the handgun was dissembled, the Armory Kote finish proved to be evenly applied to the inside of the slide and frame.

The pistol features forward cocking serrations. We noted that the transition from the slide to the dust cover features what appears to be a ball end cut rivaling the work on the Nighthawk handgun. The controls are tight and crisp and easily manipulated, with a positive detent. The G10 grips are molded in slightly different patterns forward and to the rear. This makes for good adhesion but also allows easily adjusting the grip. Both adhesion and abrasion are good. Trigger compression was pleasant, with the trigger breaking at a clean 4.9 pounds. At 40 ounces, this is the heaviest pistol tested, but it also seemed to handle recoil the best. The effort to rack the slide was the greatest. This is a trade off because the recoil spring does a good job with all loads, including +P ammunition, and the pistol locks up tight.

During the firing test, we really liked the sight set-up. The serrated front sight provided an excellent sight picture. Combat accuracy was at least as good as any of the pistols tested for the most part, with the Nighthawk shading the Springfield by a margin. This is impressive considering the price difference. Firing off hand for head shots (often called hostage rescue) was limited to 15 yards, but that is a long shot if you are hitting the cranio-ocular area. The Loaded Operator was very consistent, with good results in trained hands. The pistol did not equal the Nighthawk or the Guncrafter in absolute accuracy, but it was close in practical terms. While none of the pistols tested were dogs, and all were actually very accurate, the Springfield Loaded Operator was the least accurate of the 5-inch-barrel guns in absolute accuracy, it you can criticize a pistol that fired a 1.75-inch group on one occasion!

Our Team Said: After appraising the performance of the Springfield Loaded Operator, we gave it an A rating. Based on the light rail, tactical finish, night sights and good reliability, we also named this pistol a Best Buy.