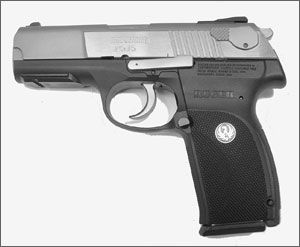 First introduced in 1987, the Ruger P-Series pistols were the first firearms to be manufactured at Sturm, Ruger’s new Prescott, Arizona, plant. The P-Series was the result of a development program to build a state-of-the-art pistol with features designed by practical shooters, that would offer excellent reliability under harsh conditions. Since the P-Series pistols were introduced, they’ve seen extensive use by law enforcement, government agencies, and sportsmen all over the world, and have gained a good reputation for their rugged durability. As we have come to expect from Ruger, the pistols are also being steadily improved and the new KP345 is one outgrowth of that.

Ruger’s new KP345 is a double/single-action, semi-automatic, and uses an eight-round, single-stack magazine in .45 ACP caliber. The new pistol features a slimmer, contoured, satin-finished polymer frame with a newly re-contoured checkered grip for improved control. Also featured on the KP345 is the exclusive Ruger “camblock” design to reduce felt recoil and frame stress. In addition, the KP345 comes with a nice array of other features like a more rounded trigger and guard, redesigned high-visibility white-dot sights, a loaded-chamber indicator, and an internal lock.

The KP345 is available with a manual safety or de-cock only, and with a blued or stainless top end. My test gun was stainless-steel version, equipped with the ambidextrous manual safety and a Picatinny-style accessory rail made integral with the frame. KP345PR, P345PR, and KP345DPR models all come with the Picatinny-style accessory rail that is neat and unobtrusive. In an effort to comply with some state and local laws, Ruger has added a key-operated internal lock to the KP345 pistol. This lock can be operated when the safety is in the “on” position by inserting the supplied key through a hole in the right-side safety lever; turning the key as far as it will turn in a clockwise direction locks the manual safety in the “on” position.

I had the opportunity to shoot the KP345 pictured here extensively, and all three shooters involved in the tests were impressed with the new Ruger’s performance and accuracy, as well as its easy handling qualities. The KP345 was easy to shoot, has a very comfortable grip and points well. One thing I especially appreciated was the lack of any “mushy feeling” from the grip frame twisting in the hand like I’ve experienced with some other polymer-framed .45s. In fact, if it weren’t for its light weight, I would have to say the feel of this pistol during firing is very much like that of a more rigid, steel-framed semi-auto.

1. First, always be sure the weapon is unloaded. Grasp the pistol around the grip, being careful to point the muzzle in a safe direction and to keep your fingers away from the trigger (#34.) Engage the safety by rotating the safety lever (#18 and #19) down, until the white dot appears through the hole in the left-hand safety lever (#19.) Remove the magazine by depressing the magazine latch (#39), allowing the magazine (#56) to be removed from the bottom of the grip. Hold the pistol firmly around its grip and pull back the slide (#1) all the way. Visibly check the chamber while the slide is open to make sure no cartridge remains in the barrel.

2. With the magazine removed and the safety in the “on” position, remove the slide by drawing it to the rear and push up on the slide stop (#54) to lock the slide in place at the rear.

At this point, the pistol is disassembled far enough for normal cleaning and maintenance work.

4. Disassembling the frame is not an undertaking I would suggest for an amateur. While it’s not a particularly complicated weapon, disassembling the KP345 requires that the gunsmith pay careful attention to details and proceed slowly. One other word of caution: If you’re not one of those rare three-armed gunsmiths or don’t plan to grow another arm any time soon, try to have a partner there with you, because several of the disassembly and assembly operations are definitely three-handers!

Also, if you’ve never done this before, I would advise laying the parts out as they are removed and in the same order they were removed. I suggest you use an unoccupied part of the work bench and a sheet of white paper.

Start by making a steel slave pin that is .075 inch in diameter and .620 inch long with rounded ends. Use this pin to push out and replace the front sear-pivot pin (#53). Use a small straight pin punch to push out and remove the rear sear-pivot pin (also #53). Carefully lift out the blocker lever (#41), the sear (#43), and sear spring (#42) as an assembly. Notice the positions of these parts, especially where the spring bears, for reassembly.

Hold the ejector (#46) forward slightly, and use a softwood block to part the right frame side. At this point, you will see that the hammer-pivot pin (#38) has jumped out slightly. Grasp the end of the hammer-pivot pin and remove it. The hammer assembly (#37) can now be lifted straight up and out.

I don’t recommended removal of the ejector assembly unless something is actually wrong that needs repair. However, if for some reason you must remove it, start by mounting the frame in a padded vise; use caution that you don’t tighten the vise enough to crush the frame. Using two small punches, push in on both sides of the ejector-pivot assembly (#45). These are accessed through the sides of both grips as shown in the photo. Carefully push the ejector assembly forward and work it out and up through the magazine well. Set this aside as an assembly. For reassembly, note its position and the position of the spring ends which both face down, into the mainspring housing well.

Be certain that you have aligned the spring ends so they point down, into the mainspring-well opening.

5. To disassemble the slide, mount it in a well-padded vise, using caution so that you don’t over-tighten the vise and crush the slide. Loosen the rear sight-lock screw (#12). Using a soft drift punch and hammer, carefully drive the rear sight assembly (#11) off from left to right. The sight base is longer than it is wide, and you’ll have to tap alternately front and rear to keep it moving. Move slowly as you do this because three separate coil springs, all under tension, will become exposed as you slide the sight farther over to the right. Be sure you keep these springs captive and be careful to notice their positions for reassembly.

The springs will appear in this order as the sight slides from left to right: one, magazine-disconnect spring (#7), two, loaded-chamber indicator spring (#4), and three, firing-pin block spring (#9) and plunger (#10). Once the rear sight is off, lift out the firing-pin block (#8), the loaded-chamber indicator (#5) and the magazine disconnect (#6), carefully noting their positions for reassembly.

The safety strut (#17) is now free and can be lifted out the top of the slide. Push the safety lever (#18) into the down position until it can be pulled off the slide. Notice it has a small leg that has to align with a cutout in the slide before it will come out. The firing pin (#26) and its spring (#25) can now be pulled out through the rear of the slide. Be sure you make note of its position for reassembly.

Reverse these assembly procedures to reassemble the pistol.