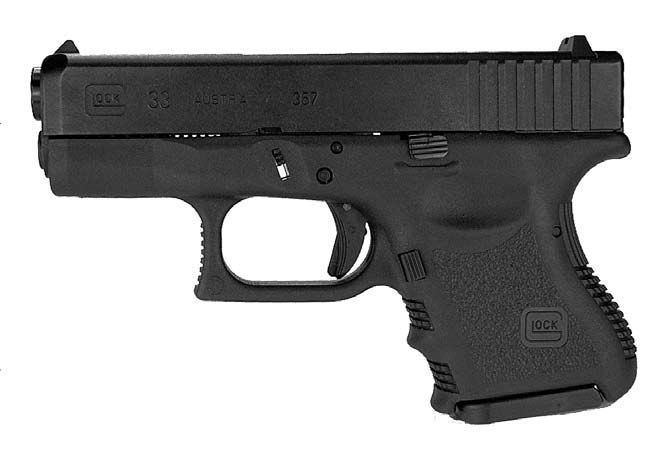 The Glock 33, or G33, was chambered for .357 SIG and operated just like its medium- and large-size brothers, (models G32 and G31 respectively). The most notable difference was the short grip, which limited the shooter to holding the pistol with only two fingers. The rear of the stubby grip showed a generous palm swell and the trigger guard was generously undercut, or generously under-molded.

Beneath the short slide with standard white dot front and white outline notch rear sight was a 3.42-inch barrel and plunger-style guide rod with two recoil springs. Like the Smith & Wesson SW990L, the only operational levers along the side of the G33 were the left-side-mounted slide release and the takedown levers that were below flush with the frame. Removing the slide required moving the slide back about 0.3 inches and pulling the levers downward simultaneously. Making sure the gun is empty was critical because the trigger must be pulled to release the slide.

The outer edge of the externally mounted extractor acted as a loaded-chamber indicator by bulging outward when a round was in place. We felt this was too vague to be relied upon. The only other obvious safety was the lever placed inside the face of the trigger that released the striker block. The trigger presented about 8 pounds of resistance, so in normal circumstance, just as in the case of the SW990L, the G33 should not go off without a determined effort. Unlike the Springfield Armory Ultra Compact 1911A1, which has a thumb-operated safety that effectively turns off the trigger, neither the G33 nor the SW990L can positively prevent firing if your finger is inside the trigger guard.

Everyone’s first impression of the Glock 33 was how little grip area was available to the shooter. This also affected our ability to release the magazine. Without shifting the hand properly when pressing the release, the lever can shift through to the other side of the grip and press against the inside of the hand. Also, the magazine was likely to be blocked by the palm or bottom finger instead of dropping free. In addition we were concerned about getting a sure grip from concealment. Each of the two supplied nine-round magazines used flat base pads, and we found that it was nearly impossible to shoot the gun with a high grip. Closing the gap between the web of the hand and the undercut of the frame required a separate movement. Aftermarket basepads similar to the one found on the Smith & Wesson magazine that add a third finger groove were helpful, but each of our polymer test guns proved a little too small and top heavy for an ideal draw.

According to Bob Forker’s massive book of reference Ammo & Ballistics 3, (Safari Press), the .357 SIG is rated with a recoil factor slightly higher than .40 S&W. In practice we found that the .357 SIG was louder than either .40 S&W or 45 ACP but less disturbing to the sight picture. We think this is because the bullets common to .357 SIG were smaller and lighter, creating less torque and muzzle flip. Nevertheless, firing from the shortest barrel among our three guns, the Glock 33 produced far more muzzle energy than its competitors. The strongest of our test rounds was the Winchester WinClean 125-grain BEB (FMJ) rounds, producing 458 ft.-lbs of muzzle energy. Second was the Winchester USA 125-grain JHP (452 ft.-lbs.), and third was a new offering, Hornady’s 147-grain JHP/XTP ammunition, which rang up 419 ft.-lbs. of power. Despite the lack of available grip, we were able to find a satisfactory setup at the bench. The WinClean helped print the only sub 1-inch group in the test, but both Winchester rounds printed average size groups below 2 inches across. The Hornady rounds averaged about 2.1 inches across. Reliability was 100 percent.

In our action test we learned that due to the lack of available grip, it didn’t make much difference whether we used one hand or two. Our elapsed time for two-handed shooting varied from 4.35 to 4.52 seconds to complete the course of fire. Our strong-hand-only runs took from 4.55 to 4.63 seconds to complete. We pulled one shot left on the two-handed string for the only miss. We liked the accuracy of the G33, and our first shots after the audible start signal were almost as fast as when firing the Springfield Armory Ultra Compact, (about 0.82 seconds versus 0.79 seconds respectively). But, we were hampered by the small grip, which prevented us from quickly stabilizing the gun after recoil slowing our followup shots.