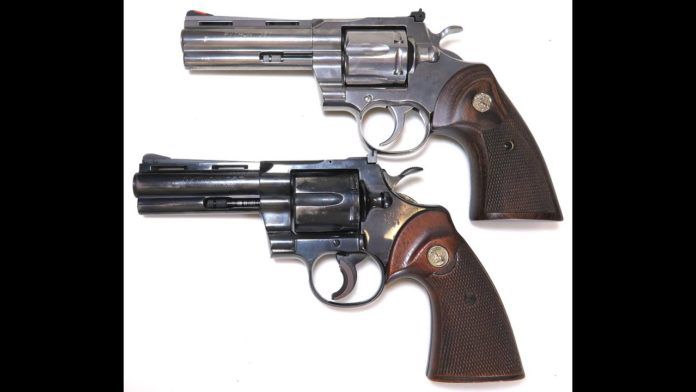 The Colt Python is back, and more than a few Gun Tests readers have requested a face-off between the new Pythons and the original Pythons.

In the January 2021 issue, Contributing Editor Robert Sadowski shot a quartet of “Snakes” head to head to find out how the new revolvers compared to the original blued models.

When Colt introduced the Python in 1955, it was advertised as the Cadillac of revolvers.

No doubt the original Python would be a hard act to follow.

Originals oozed style, with a full-lug barrel sporting vents. Not only did it look great, it performed as good as it looked.

The double-action trigger pull on an original is the definition of a slick, smooth and nearly perfect.

Accuracy was also a trait of the originals.

If the originals had faults, it was because they were heavy, and the rear adjustable sight was delicate when using hot magnum loads.
The cost of the original was high due to hand-fitting the mechanism and giving them a brilliant, but costly finish.

Standard production was from 1955 through 1996. After 1997 through 2006, the Python was built in the Colt Custom Shop. You hardly see a Python in use these days.

Most originals are “safe queens” quietly and slowly acquiring value.

The new 2020 Pythons come in a bright stainless finish.

The new Colt Python for 2020 still features the distinct aesthetics of the original.

But with an updated mechanism and use of modern manufacturing techniques.

Some things, like the barrel roll markings, differ from the originals.

The QR code on the right side of the frame is a blatant clue the gun is a 2020 model.

There is still the “rampant pony” roll mark on the left side of the frame, like the originals.

Also, the dimensions and contours of the new guns closely follow the originals.

Modern manufacturing methods like metal injection molding, or MIM, allow Colt to greatly reduce the cost to produce small components like the hammer and trigger.

The new trigger has less curve than originals.

Other differences include the front sight, which is removable via a hex screw, whereas the originals had a front sight held in with two pins.

The black ramp front sight uses a red insert, which was common a few decades ago.

The front sight also looks like it can be swapped with any of front sights on the new Cobra and King Cobra revolver if you prefer a fiber-optic sight.

The rear sight is matte black and adjustable for windage and elevation. The muzzle crown on new guns has a more pronounced crown.

The new Python is built almost entirely from stainless steel using CNC-machining, and they have a beefed-up top strap. The new guns do not have a serrated backstrap like the originals. We removed the grips and side plate on an original and a 2020 version, and the differences were obvious. New guns have noticeably fewer parts.

The mainspring wasn’t a flat V-shaped spring but more U-shaped.

Originals had a reputation for tight cylinder lock up with no play. The new ones also display excellent lock up.

With all the Pythons tested, the cylinder latch is full size and is pulled rearward to swing out the cylinder.

Also consistent with all Pythons was the end of the ejector rod was knurled, and empties — even shorter 38 Special cases — were not completely ejected.

Colt wisely kept the 1:14-inch rifling twist rate like on the original snakes, which had a reputation for being accurate. We found that in our test as well. We ran the Pythons with a mix of bullet weights and types in 357 Magnum and 38 Special.

We carried the 4- and 4.25-inch-barreled revolvers using two belt holsters. One was a Galco Phoenix and the other was a Safariland Model 567 Custom Fit.

Though well used, this gun was still tight. The cylinder-to-forcing-cone gap measured 0.003 inches. And there was no wiggle in the cylinder.

We preferred the checkered texture on the 1964’s hammer over the new gun’s serrations.

This is a heavy revolver due to the full lug, and that’s a good thing for extended shooting because it absorbs recoil. It also makes carrying the revolver a chore.

The best accuracy we could squeeze out of this old snake at 25 yards was a five-shot group measuring 1.07 inches using Hornady Critical Defense 38 Special with 110-grain FTX bullets.

With 38 Special loads as well as 357 Magnums, the ’64 felt easy during recoil.
The new 4.25-inch-barrel Python, $1500, has nice balance and a good grip. We fell in love immediately with the bright stainless finish, which is brilliant and easy to clean.

The new two-piece grips are checkered laminated wood with an inset nickel Colt medallion. The grips look great, and they are thinner than the checkered walnut on the originals.

Because the grips are thinner, they also transfer recoil, which is what we encountered with magnum loads.

The curve of the trigger is different than on the ‘64, yet we still had plenty of leverage. It is also serrated. In DA, the pull measured 9 pounds, which was a pleasure. In our opinion, the trigger on the new Python is excellent and close to the original in quality.

In SA, the trigger breaks crisp and clean with no take up and no mush. It averaged 6 pounds and was not as good as the originals.

There is a transfer-bar safety system built in. The ramp front sight has a red insert in it like revolvers did a few decades ago. We liked the contrast with the rear. The front sight is removed via a hex wrench and is easily replaceable.

The new Python shot circles around the ’64 with a best 25-yard, five-shot group of 0.5 inches with Winchester Defend 357 Magnum loaded with 110-grain JHP bullets.

Average accuracy with that ammo was 0.7 inches. Nice! All magnum ammo averaged just over 1 inch.

This is a shooter for sure. With 38 Special ammo, it averaged 1.6 inches with Blazer +P ammo and 1.2 inches with Hornady Critical Defense. We also noted the new Python had more velocity than the ’64.

To see details on how these two pistols compared, subscribe to Gun Tests magazine today.