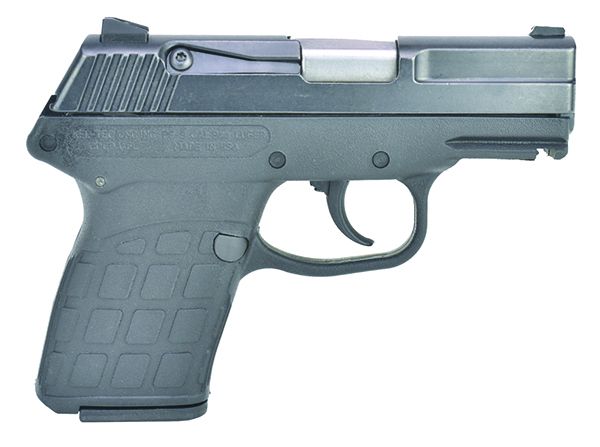 We at Gun Tests have examined any number of KelTec designs, with the most recent being the company’s PMR30, a high-capacity 22 Magnum in the October 2020 edition. On the whole, we have found KelTecs to be inexpensive, functional firearms whose designs are usually simple. The PF9 continues that trend.

Introduced in 2006, the PF9 has been an outstanding success for KelTec. It contains only 40 parts in its diagram, including those for the magazine, making it simple to use and simple to maintain. The slide is milled from a single block of 4140 steel and is finished in a not-quite-matte black. The barrel is also milled from 4140 steel and, as with all the pistols in this test, is fully ramped and should do a good job supporting the case in the chamber.

The extractor is a simple bar and hook that fits in a recess on the exterior of the slide. It is attached at the rear with a Torx screw. The front sight is a short plastic post fixed permanently to the slide. The rear sight is also plastic and is held in place via a hex-head screw. Some lateral movement of the rear sight is possible upon the loosening of the screw.

Takedown is accomplished via removal of a single pin. Normal stuff here — remove the magazine, check the chamber more than once to make sure it is empty and lock the slide to the rear. The takedown pin is located immediately in front of the slide stop but does not project out from the side of the frame. It is slotted, and the rim of a shell casing can be inserted into that slot so the shooter can pull the case out from the side of the frame, bringing the takedown pin with it. Slide the top end forward and off the frame. Lift out the recoil-spring guide rod with its nested recoil springs and then the barrel to complete disassembly. Reassemble in reverse order, but watch the takedown pin when doing so. You will see a lateral spring that extends across the hole in which the takedown pin must be inserted. There is a small notch on the underside of the face of the takedown pin, and that pin must be inserted far enough that the spring slides up into that notch. Also note that the instructions state that when the top end is reassembled and ready to place on the frame, the barrel hood must be depressed for

the slide to be pushed to the rear correctly. Otherwise, the takedown pin does not capture the barrel correctly to the slide. As always, it’s a good idea to read the manual.

The frame is a simple polymer shell into which a chassis has been molded. The metal rails of the chassis are more than mere tabs and extend beyond 3 inches, giving a great deal of strength and support to the slide. Large raised rectangular bumps provide texture for grip control, though it is a little less control than we prefer. Fire control on the PF9 is double action only, utilizing a very simple linkage directly to the hammer. It really does feel like the trigger on a small revolver. The required pull is fairly long, but this KelTec trigger needs less than 5 pounds of pressure to break a shot, and the trigger stroke is smooth. The hammer is visible through a port in the rear of the slide and could be touched, but it does not protrude far enough to be manipulated.

Feeding and function were perfect. The KelTec shot the largest groups, with an average of 2.10 inches, but a good part of that seemed to be that this pistol just did not like the SIG V-Crown ammo. Average group size on those was larger than 2.5 inches. Average shooting-drill time was about 0.5 seconds slower than the other pistols being tested. We thought that was a function of the longer trigger stroke. We also don’t know that half-a-second spread over five shots from a small defensive handgun is statistically significant.

Our Team Said: This is an inexpensive pistol that functioned flawlessly. It reminded us of a good 38 Special snubbie with a seven-round magazine — only we wish the revolvers had a trigger this smooth.