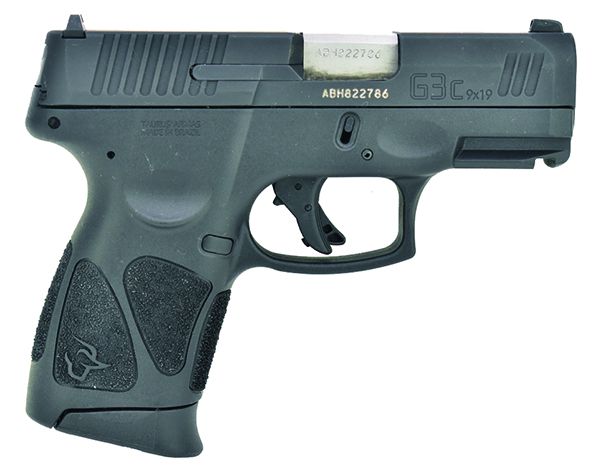 Taurus has a long-standing and well-deserved reputation for producing inexpensive firearms. In their case, inexpensive does not necessarily mean cheap. They seem to find a way to pack a lot of features into a firearm that doesn’t cost so much. We know any number of devotees of their Raging Bull hunting handguns. Jessie Harrison, pro shooter for Taurus, can do some amazing things with the company’s 1911s. We wanted to find out if the new G3C would continue the trend.

The ”C” in the G3C’s name stands for compact, and compact it is. Overall length is just over 6 inches and height, measured to include a magazine fitted with a finger extension, is right at 5 inches. For comparison’s sake, a Gen 3 Glock 19 we happened to have laying around showed almost 7 inches in length and about 5.2 inches tall. There are several other similarities to the Glock platform. We have seen numerous reports that Glock sights will also work with the G3C. The style is the same, and our digital calipers showed the dovetails to be right at the same width on the rear sight. But we can’t confirm that, so be careful what you try. We even called Dawson Precision (DawsonPrecision.com), maker of the some of the best aftermarket sights out there, and they could not confirm consistent interchangeability. Luckily, the Taurus’s sights are genuine metal, and unless the shooter is looking for some other feature on sights, those that come with the Taurus G3C should be perfectly functional.

The disassembly latch will also look familiar to those accustomed to the Austrian import. There is, however, a change in the breakdown technique.

With the Taurus, first remove the magazine, check to make sure the chamber is empty and then check again. Pull the slide slightly to the rear with one hand while pulling down on both sides of the disassembly latch simultaneously. Let the slide ease forward a fraction of an inch and then press the trigger to allow the top end to be removed. The recoil spring and barrel can then be lifted out. Reassemble in the reverse order, but the trigger does not have to be activated for that process.

The steel slide has a matte-black finish and a well-beveled nose. Even the edges on the rear sight are rounded somewhat. These features keep square edges off a holster, thus aiding in re-holstering, and not having sharp edges allows hands to make malfunction clearances much less problematic. The slide has angled grasping grooves at the front and the rear. They felt sharp enough to allow a solid purchase without being too sharp. As with most new polymer pistols, the barrel locks up with the slide using a shelf at the forward end of the barrel hood. Lockup was tight, and the barrel has a small notch at the rear of the hood that allows a visual check of the chamber for a loaded round. The external extractor is hinged, and spring loaded. The striker block is readily visible with the slide removed.

Some of the external features may resemble a Glock, but the Taurus’s internals are completely different. The G3C also sports a trigger-safety blade, but the Taurus version can actually be depressed flush with the trigger when actuated. That means that the little nubbin of plastic is not present to be a constant irritation to your finger. The trigger also has an overtravel stop limiting movement after actuation. Initial take-up on the trigger is substantial, with our measurements showing almost half an inch of movement before reaching the pressure wall. The Taurus trigger provides a second-strike capability. Somewhat like a revolver, if the pistol doesn’t go bang, simply press the trigger again. That would be a definite paradigm shift away from the conventional “Tap, Rack, Bang” method of clearing a malfunction, but double-striking could be trained. When using the standard “single-action” trigger, if you will, required compression was only a bit more than 4 pounds, with the movement being short and crisp.

The frame provides controls in the normal locations, with a manual thumb safety being located at the left rear of the unit and the slide stop immediately in front of it. This safety, while definitely unobtrusive, is somewhat difficult to activate. We tended to ignore it during shooting trials, relying on the trigger-blade safety and the-almost-double-action trigger instead. The frame sports a nice dimple for the thumb and spots that give a good indication as to where the pads of the thumbs should go when employing good grip technique. The slide stop is left side only and protrudes enough to be easily activated. The grip uses texture that is aggressive enough to be useful without being painful. The dust cover provides a single-slot Picatinny rail usable for lasers or lights.

The Taurus G3C ships with three 12-round magazines that loaded easily and worked well. The pistol ate everything we fed it, with nary a hiccup. The longer reset on the Taurus slowed our speed drills a bit, with the Taurus coming in third place out of four pistols, but we are only talking speeds averaging 0.15 seconds slower per run than the fastest in this test. Five shots groups at 12 yards averaged 1.85 inches per group, with the Taurus showing a slight preference for the Speer Gold Dot 124-grain fodder.

Our Team Said: The Taurus G3C pistol is an inexpensive offering that functioned flawlessly and shot well.