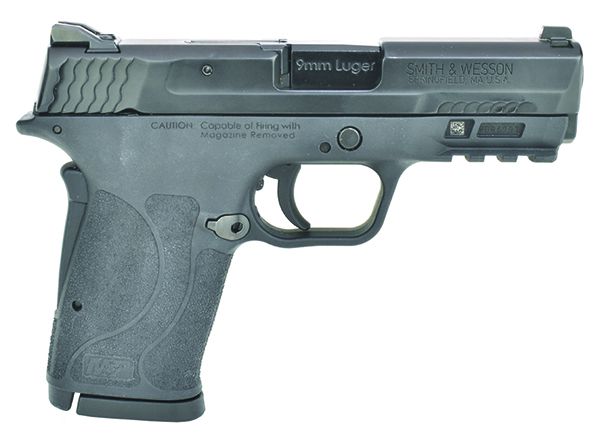 Smaller stature, injury, and age can bring the best of us to a point where firearms can be difficult to manipulate. Magazines can be hard to load. Slides become hard to cycle. Technique can obviate some of those problems, but not all of them and not always. A few years back, Smith & Wesson decided to help out with the design of its Shield EZ 380. Magazines, slides, springs, frames, and more were tweaked to make it easier for those with less-than-optimum strength to operate. The 380 EZ was a smash hit, and now we have the logical addition of the Shield EZ 9mm version from S&W.

At first glance, the Shield EZ9 and Smith & Wesson’s M&P9 (Military & Police) appear to be very similar. The silhouettes are almost the same. Controls are shaped and located in almost the same places. Even the sculpting on the slides shows the common heritage. But upon further inspection, the differences are numerous.

For example, the grip safety on the EZ9 is hinged at the bottom instead of the top a la the 1911, and the trigger is disconnected unless the safety is depressed completely. Also, the slide and the frame are thinner than on the M&P, with the narrower frame a result of a single-stack magazine. Two magazines are shipped with the pistol, and each holds eight rounds. Somewhat reminiscent of many common 22 Long Rifle magazines, the EZ9 magazines are equipped with tabs on the side that can be depressed by hand, thus lowering the follower and more easily allowing rounds to be inserted into the mag. We were unimpressed with the improvement this allowed initially, then we had the epiphany of actually setting the base of the magazine on the table while we depressed the tabs and voilà — instant and simple success. As a family member once said, “Everyone is just a little stupid sometimes.” Having done this, the magazines were a cinch to load, inserted easily, and dropped cleanly. The magazine catch is reversible.

The working parts of the EZ9 look a lot like the M&P, but then they don’t. The chassis is similar, the takedown lever and the slide stop are much the same, but the M&P is striker fired and the EZ9 is hammer fired. That required a complete redesign of all the fire-control parts. Now, you don’t have to reach inside the ejection port and push down a lever that lowers the sear to disassemble the EZ9 as with the M&P. Standard rules apply: Drop the magazine, check the chamber at least three times to make sure it is empty (visual, tactile, visual), lock the slide to the rear, rotate the takedown lever about 90 degrees clockwise, and without depressing the grip safety, ease the top end forward and off the rails. Lift out the recoil spring and barrel, and you are done. Reassemble in reverse order.

Because there has to be room for the hammer to rotate as it builds momentum prior to striking the firing pin, the slide had to be redesigned as well. The slide is more now a shell than a solid piece that has seen a lot of mill work. Space has been milled for and a single unit has been pinned into the slide that contains the breech face, a pivoting loaded-chamber indicator, the extractor, and the firing pin. That has left room aft of same for the required movement of the hammer.

That open area also allows access to the screw that secures the rear sight in its dovetail. We found the rear sight to be easy to adjust — almost too easy. We would have liked for the dovetail to be tighter on the sight. We also found the adjustment to be necessary. Everything we shot went a good bit to the left. That can always be the shooter, so we checked that. We later measured the front sight to be more than 0.020 inch left of center in its dovetail. That required we move the rear sight to the right substantially. We also noticed that every load everyone shot was low. All that means is the front sight is too tall, which is much easier for the owner to fix than one that is too short.

All that redesign work has left a pistol that does not require as stout a recoil spring as what would normally be found in a modern semi-auto. That makes it easier for those with less-than-optimum grip strength to operate. Required compression for the trigger was just over 4 pounds, with its movement being short and crisp. Once we figured out the trick, the magazine was much easier to load than the everyday shove-them-in-from-the-top type.

Function was flawless through a number of different types of ammunition, including handloads. Felt recoil is, obviously, subjective, but it was less than we expected. The EZ9 produced the second-best groups of the four handguns tested and also came in second in the speed drills. Its favorite ammo was the SIG 115-grain V-Crown, as the details in the Range Data table show.

Our Team Said: True to its goal, the S&W Shield EZ9 was easy to manipulate and soft to shoot, but the sights needed to be calibrated a bit better. Once sighted in, the rear sight might need a dab of temporary thread locker to ensure the sight doesn’t move in its dovetail.