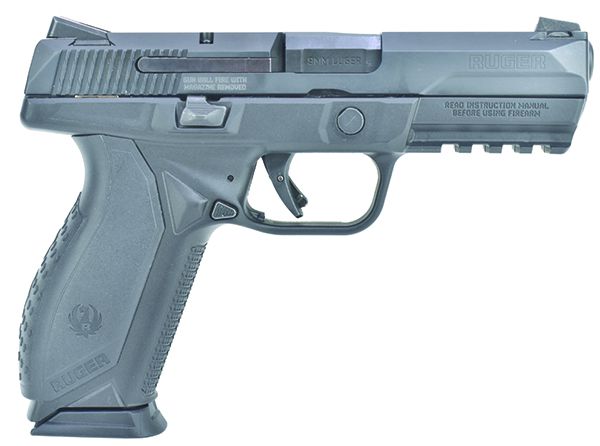 As determined by figures released by the BATFE (Bureau of Alcohol, Tobacco, Firearms and Explosives), Ruger is now No. 1 among American firearms producers. The American series is their latest product in the defensive-handgun category. To make its capacity more in line with the others, we got a kit with 10-round magazines instead of the standard 17-rounders (No. 08605) that normally accompany this pistol. To those of you for whom that is a normal restriction, please know you are in our prayers.

The Ruger American is a full-sized pistol with a barrel length of 4.2 inches and an overall length right at 7.5 inches. Weight empty is about 28 ounces, which goes up to more than 35 ounces when fully loaded. This is not a small defensive pistol, though it would be perfectly at home as a primary defensive pistol for the house. Because of its size, we expected this pistol to recoil less than the others in our sample. We were not prepared for how much less it recoiled. Ruger states that the cam on the barrel in this pistol is different and that it will have less felt recoil. As properly jaded shooters, we demanded that they prove it. The physical characteristics of the firearm (weight, balance, position in the hand, etc.) along with power of the cartridge are major factors in felt recoil. The primary mechanical factors in recoil are going to be amplitude and duration. Ruger changed the cam that unlocks barrel as it cycles under recoil in a way that spreads out the time (duration) of the recoil. That makes the same amount of recoil feel like it just recoiled less. Whatever they did works. Side by side against similar pistols, we could tell the difference. We also saw the difference at the range, with the Ruger posting the fastest times during our speed drills.

The Ruger American’s slide is nicely sculpted with a beveled nose and angled flats milled on the top edges. Reholstering should be a snap. The extractor is a pivoting, spring-loaded, external unit. The sights are not “Novak style,” they are genuine Novaks. Both front and rear are drift adjustable, and they present a total of three dots to the user. The rear of the slide has a decent length section of the obligatory grasping grooves. The glass-filled nylon frame cradles a chassis that sports long rails reminiscent of the Ruger-57 reviewed in the October 2020 issue of Gun Tests. We like long metal-to-metal contact in our handguns for consistency. The slide top is ambidextrous as is the mag release. The trigger has a blade safety that can be depressed below flush, meaning it doesn’t keep poking into your finger throughout the shooting session. Required compression was a bit stiff at slightly more than 6 pounds, but necessary movement was minimal, with little take-up, overtravel, and distance to reset only about 0.25 inch.

The dust cover brings a four-slot Picatinny rail. The rear of the frame allows the shooter his or her choice of three different backstraps. These are easily changed by merely turning a Torx-head screw about 90 degrees counter-clockwise, which allows the existing piece to be removed and a different-size insert to be slipped on. The magazine basepads have a lip on the side that protrudes far enough to be grasped and yanked on should the mag decide to stick at an inopportune time.

One of those 10-round mags worked perfectly, the other not so much. Spring tension was tight to the point where the tenth round was very difficult to load and, when inserted fully-loaded in the pistol, pushed against the bottom of the slide hard enough to make cycling sluggish. Downloading to nine rounds cured the problem. Loading the magazine completely and leaving it there for two weeks or so would probably accomplish the same thing.

Disassembly was a snap and did not require that the trigger be pressed. As always, before disassembling any handgun, remove the magazine and check the chamber, verifying that it is empty. Lock the slide to the rear. Rotate the takedown lever about 90 degrees clockwise and move the top end forward to lift it off the rails. Lift out the recoil spring and barrel to complete. Reassemble in reverse order.

The Ruger American was hands-down the accuracy champ of this test, averaging 1.10 inches per five-shot group overall. Its favorite fodder was the Speer 124-grain Gold Dot load, shooting an average group of 0.67 inch with them. Other than the tight magazine, function was perfect.