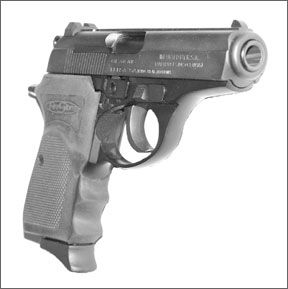 Back in April 2006 we tested three .380 ACP pistols, one of which was the Walther PPK, as made here in the U.S. under license by Smith & Wesson. We loved the well-built little PPK, even though it had to go back for rework before we gave it a clean bill of health. It had failed in DA shooting, but a stiffer spring gave it the equivalent of our Grade A appraisal. We recently found a gun that looked a lot like the PPK, the FireStorm by Bersa ($307 MSRP), from Argentina. We thought it would be interesting to see how it fared against the PPK (MSRP $566). A sweep through our dealers shelves also gave us one of the always interesting U.S.-made Hi-Point handguns in .380, the Model CF ($135 MSRP). Could the FireStorm hold its own against the classic PPK? And did the Hi-Point again get our highest marks, as has been common for that make over the years? Heres what we found.

Hi-Point firearms seem to have several consistent attributes, among them the fact that they have always worked perfectly for our test crew. Another is that they generally have been on the unattractive side, to put it mildly. This CF was no exception to the latter statement. It looked like a soldering gun. The bulky look of the Hi-Point comes from its massive slide, which results in gentle recoil and efficient driving of the upcoming round into the chamber. Beauty is as beauty does.

This Hi-Point had a two-tone look. The frame was made of gray plastic, with steel inserts at appropriate places. The gun was noticeably top-heavy because of the big slide and light frame. The slide was finished mostly in a well-done matte black, with its outermost side panels gray-finished steel. This made the gun more attractive, we thought, than if it were all black. Fit and finish were way more than adequate. The front of the trigger guard had a hook-like shape for those who like to put a finger there. The sights were excellent. The rear was fully adjustable. The integral front was sloped or ramped. Both front and rear sights had brilliant red dots added to make the sights instantly visible, though some might prefer white dots. The rear notch and the front blade were large enough to be easily seen, and gave an excellent sight picture. We found the gun was right on the money, for the most part, so we didnt have to touch the sight adjustment.

The controls were simple. The magazine release was a prominent button (perhaps too prominent) on the left side of the frame, right behind the trigger guards lower arm. Above and to the rear of that was the safety (press it down to shoot), which also doubled as a slide catch for inspection, cleaning, and takedown. It took a strong

push to get the slide all the way back. The trigger could not be pressed unless the magazine was in place. The slide stayed back after the last shot. To reload, you had to insert a fresh magazine and then tug on the slide and let it fly forward. The big, heavy slide would then trundle on its way with the top cartridge in tow. One mag came with the gun, and it held eight rounds.

Takedown was effected by shoving a roll pin out of the frame with a drift punch, after the slide was locked fully rearward. A notch in the slide exposed the pin in that position. Full takedown is generally not needed for regular cleanup, which made this a workable setup.

There were two problems with the Hi-Point. One, the trigger required a pull of about 10 pounds. You had to be really determined to make the gun go off. The trigger pull also varied in force from shot to shot, and this didnt seem to get better the more we shot. The measured pull varied from about 8.5 pounds to well over 11. Second, the grips were very slippery. If it were not for the finger grooves, wed have had a hard time holding onto the gun. One quick solution would be to wrap the grip with that sticky tape used on baseball bats. A better solution would be for the factory to do something about it before the guns leave the plant. This could perhaps be done by molding in some checkering on the front and back straps and on the grip panels, or by making the side panels of sticky material, like those on the FireStorm.

We tested with 90-grain FMJ by Independence, 95-grain FMJ by Ultramax; and Cor-Bon 90-grain JHP. Groups at 15 yards were in the 2- to 3-inch realm, dead center for point of aim, with the Cor-Bon loads striking slightly higher. There were no failures to fire, nor eject, nor feed. This was no surprise. Hi-Points tend to do this with boring regularity, in our experience. The Hi-Point was less than stellar in fast-shooting exercises at closer range because of its hefty trigger pull.

Our first impression of the Argentine-made FireStorm was that it sure looked like a PPK. The lines were mighty similar, but the finish in this case was all business. The entire gun was matte black except for the white marks on the huge sights and the red

dot under the safety lever. The finger-grooved, hard-rubber grips gave excellent traction and good control to the gun. We thought the magazine extension was an important part of the grip. It would help get the magazine out of the gun if the mag happened to stick, and also provided a good rest for a finger.

The sights were very good. The front blade was thick and prominent, with a slightly sloped rear face that held a huge white dot. Wed have liked more room between the sides of the front blade and the edges of the rear notch, but this setup worked. The rear was dovetailed into the slide with no provision for elevation adjustment. The rear-sight notch was outlined with a highly visible white band. Both the FireStorm and the Hi-Point had smooth front faces to the rear sights to permit practicing clearance drills without having to visit your doctor. In fact, both guns were free of all sharp edges where it counts.

The FireStorms controls were a bit more complex than those of the Hi-Point. The hammer could be easily cocked, and thats advisable if you have time. The safety was on the left side of the slide, as on the PPK. In front of that, and slightly below, was the slide release. This popped up to lock the slide back when the gun ran dry, and could be used to lower the slide after inserting a loaded magazine.

On the right side of the frame near the front of the trigger guard was the takedown lever. When turned downward, this permitted

drawing the slide back far enough so that its rear end could be raised, and then the whole works could be eased off the front of the barrel, much like the PPKs system. Most of us preferred this setup to the hinged trigger guard on the PPK.

The left side of the frame also held the magazine release. The magazine held seven rounds. Only one magazine came with the gun. Extras are $27. There was also a key-lock for the frame, located on the left just above the trigger pivot. This was for those who feel a need to secure the gun from firing in a positive manner. The gun would not shoot with the magazine removed.

Inside the FireStorm we saw decent workmanship throughout, though not as nice as that of the Walther PPK. There were some sheet-metal parts in the Bersa where Walther used machined pieces. Further differences were that the Walther had a larger chamber mouth and a longer, wider ramp leading to the chamber. However, the Bersa never failed to feed during our testing. The Bersa also had an automatic firing-pin lock that required the trigger to be fully pressed before the pin could reach the primer, much like the unit found on recent Colt 1911s.

The FireStorm was normally double action for the first shot, if youre in a hurry. There was no way to get around that, because applying the safety-which took significant effort-would drop the hammer. So carrying the gun cocked and locked was not possible. This is identical to the Walther PPK. But there the similarity ends. The PPK required a very stiff DA pull to get the gun to fire. We found that to be not as easy to control as the Bersa. The FireStorms DA pull started out soft, then increased in force-commonly called “stacking”-and then broke cleanly at about 10 pounds. With a little practice we found the DA pull to be highly

workable. However, the second shot is always single-action, and shooting fast pairs requires thorough familiarization. Most seasoned shooters dont much like that state of affairs.

The Walther PPK was about an ounce heavier than the FireStorm, despite its slightly smaller size. The weight difference is because the Bersa FireStorm has an aluminum-alloy frame, and the PPKs is steel. Lest this make you think the PPK is thus inherently stronger, be advised the PPK does not have a back strap. A more apt comparison from an overall size standpoint might be the PPK/S version, which does have a back strap, and also has a longer grip, like that of the Bersa, giving it an equal 7+1 capacity. The PPK is available in blue or stainless at the same price. Purists might like to know the U.S.-made PPK is now being made in .32 ACP.

The PPK was very attractive, its highly polished and magnificently finished slide sides and grip frame contrasting nicely with the matte finish on top. The grips were checkered black plastic. Two six-shot magazines came with the gun. The PPK was about a quarter-inch shorter on slide length than the Bersa, and had that much shorter of a sight radius. The sights were small on the PPK, harder to see than on the FireStorm, but also offered the best sight picture of the trio. Also, the tiny red dots of the PPK faded to zip in dim light, but the big white ones on the FireStorm could still be readily seen. The PPKs rear sight had very sharp front edges.

The PPK had a heavy DA pull. The trigger didnt budge when we applied well over 12 pounds to it. We estimated the final break at about 14 pounds, not what youd want for accurate DA shooting. Yet to our surprise, during our testing, we had a fairly easy time making hits with the PPK in DA shooting. This was probably because of the smooth, quick pull once the trigger started to move. By contrast, the Bersas DA trigger started to move at about 6.5 or 7 pounds, stacked noticeably, and broke at 10 pounds. The SA pulls measured nearly the same, 5.0 for the PPK and 5.5 for the Bersa, but the PPKs was clean on the break.