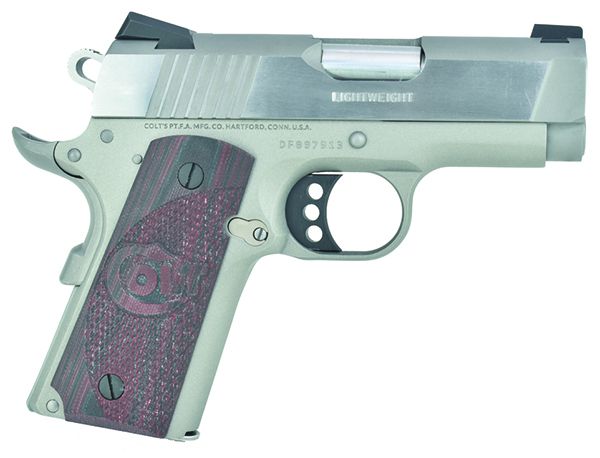 Colt debuted the original “Colt Officer’s ACP” in 1985. This first version was all steel. A lightweight, aluminum-framed version hit the market about a year later. One member of our test group owns one of the original models, and we were able to compare that pistol versus Colt’s 2020 submission. All Colt had managed to improve were the trigger, the weight, the sights, the grip safety, the frame, the magwell, and the barrel bushing (or today’s lack thereof).

Exterior aesthetics on the Colt Lightweight Defender are a mix of finishes on the stainless steel and aluminum components. The stainless slide boasts a smooth, brushed look on the flats, which is contrasted by the glass-beaded finish on the top of the slide. Colt further sculpted the slide, starting with a diagonal cut near the front end that begins a reduced-width flat extending to the muzzle. Both the forward flat and the dust cover have been bead-blasted. The final product yields a very distinctive look matched with a design that should assist the shooter in reholstering this pistol. The ejection port has been opened toward the front to allow ejection of loaded rounds easily. The rear of the port has been properly “tear-dropped” to ease the beating the empty brass takes upon expulsion.

The slide mounts true Novak sights in dovetails front and rear. The two-dot rear sight is adjustable for windage via movement in the dovetails and can then be locked down via a set screw in the rear sight body. The front sight has a single white dot. Our trusty Hornady dial caliper measured the front sight width at 0.126 inch. When matched with the cut in the rear sight we measured at 0.142 inch, this front sight did a great job of providing sufficient width for accurate shooting while still allowing a bit of light to peek through on the sides.

The frame is bead-blasted aluminum that almost perfectly matches the look of the slide. This pistol has an extended ejector and a beveled magazine well. The beavertail safety sits nice and high and has a pad on the bottom that is thick enough to make sure we released the grip safety when needed. The smooth front strap has been cut as high as possible behind the trigger to allow the shooter a bit higher grip. The Colt uses an alloy trigger with three holes to further lighten the weight. Even with the 80 series extra linkages and springs (along with the additional creep those provide), the trigger was very good. The thumb safety is left side only and is of their minimalist style. We would like to see that extended just a bit. Colt-logo grips are provided that are sharp enough to help without being overly abrasive. The supplied seven-round stainless magazine drops freely even with no slide on the pistol providing additional pressure.

We understand that, for many folks, these are a style of pistol that is designed to be carried a lot and shot a little. We also believe in practicing with our Everyday Carry (EDC) pistols. We like aluminum frames on our EDCs. We also want our frames to last for years. Hence, we are not great fans of aluminum feed ramps as used on the Colt. We prefer a design that provides a fully ramped barrel, the extension of which drops down into a slot milled into the frame. This allows the nose of the bullet, when pushed forward from the magazine as it moves toward the chamber, to hit against hard tool steel instead of a softer aluminum ramp. We also understand that for most shooters, this feature is not anything remotely approaching a deal breaker.

The early Colt Officer’s Models employed a barrel bushing, but those seemed to go away when various manufacturers moved to the 3-inch barrel. The new system features a flared muzzle that is mated directly to the slide. This gives a bit more room for the barrel to tilt while unlocking and greatly improves the cycling of these shorter pistols. This also means that the dual-nested recoil spring and guide rod are captured by a reverse recoil spring plug and that requires a slightly different routine for disassembly.

The Colt Defender fired every type of ammo we fed it with no problem. Function was perfect. It showed a preference for the 185-grain Hornady Critical Defense ammunition.

Our Team Said: The thumb safety is a bit smaller than we prefer, but we never had a problem disengaging it or the grip safety. The smooth finish on the front strap would make this pistol easier to carry under a shirt than some of the others. Not the fastest or the most accurate pistol in our tests, it balanced well, shot well and worked perfectly.

We tested at American Shooting Centers (AMShootCenters.com) in west Houston. Muzzle velocities were determined via a LabRadar chronograph (MyLabRadar.com, $559). All shots for group were fired at 15 yards from a well-sandbagged Caldwell Pistol Rest from MidwayUSA (MidwayUSA.com) and aided by a mini-DRC Fortune Cookie bag from Wiebad.com. We used a Total Eclipse holster from Blade-Tech.com for offhand speed drills. We modified it a bit to fit the smaller pistols. 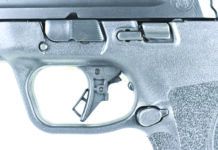 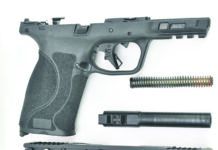 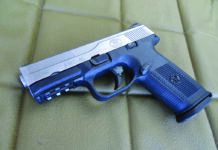