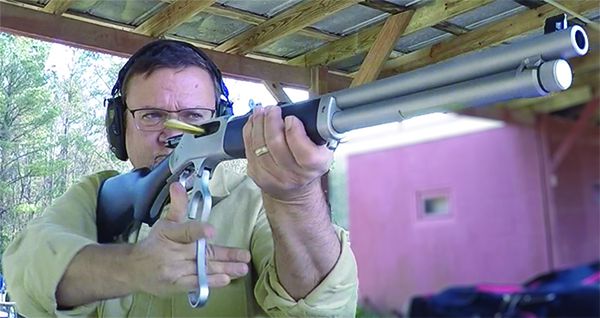 This was a recent price at BudsGunShop.com. The Henry can best be described as a no-nonsense utilitarian big-bore lever action. If you want to hunt hard, this Henry will not disappoint. Out of the box, the All-Weather looks smart, and at first glance the finish looks like matte stainless, but in fact, it is a matte chrome finish on the barrel, hammer, trigger, and lever. This finish is very resistant to corrosion. The bolt and sights are matte black and contrast nicely. The smooth stock and smooth forend are stained hardwood with a coating that resists wear and scratches. The forend was tapered where it met metal and was fatter in the center. The recoil pad is black ventilated rubber. The fit and finish were nicely executed, and the wood-to-metal fit was very good. It also is equipped with sling swivel studs. The end cap on the forend is polymer. Like the Marlin, the Henry is a side-eject rifle.

The 18.4-inch barrel is equipped with a fully adjustable semi-buckhorn rear sight with a white diamond insert under the notch. The front sight post includes a brass bead. We liked these sights and found them easy and fast to use. The top of the receiver is drilled and tapped for a scope mounts. Hi-Viz makes fiber-optic replacement rear and front sight sets ($50; HenryPride.com) and with the Henry EGW Picatinny-style rail ($27; HenryPride.com), you can mount a red-dot sight or scope.

The Henry differs from the other rifles tested in the way it is loaded. The Henry uses a magazine tube similar to Henry’s rimfire- and pistol-caliber rifles. With the rifle pointing upward, the user withdraws the brass inner magazine tube enough so the loading port is open. You then drop the rounds into the port primed side down. The magazine holds four rounds, and you will see the bullet of the fourth round in the port. That is when you know the magazine is fully loaded. You then push the inner magazine tube back into the outer magazine tube and twist and lock it into place. The process is relatively fast but not as convenient as the side-load-gate rifles.

The lever loop on the Henry is curved following the line of the pistol-grip stock. The Henry’s loop is similar to the Taylor’s loop except it is longer, with less curve. In our opinion, the loop in the Henry was more comfortable to operate fast than the Taylor’s. The action was smooth. Texture on the hammer was coarse serrations that allowed for easy cocking. It was cut to accept a hammer extension. The trigger pull measured 6.9 pounds, and we would have liked it closer to 5 pounds.

The Henry uses a transfer-bar safety system that prevents the gun from being fired except when the hammer is fully cocked and the trigger is pulled. If you are cocking the hammer and the hammer is accidentally released, the rifle will not fire. The Henry can be safely carried fully loaded with the hammer in the fully forward position. We assumed the Henry had a half-cock safety position for the hammer, but it does not due the transfer-bar design. Those of us who learned to hunt using hammer-fired rifles, like these lever actions, quickly learned how to silently cock back the hammer when game is spotted.

Going hot with the Henry, our best three-shot group measured 2.06 inches with the Hornady 325-grain FTX ammo. Oddly, the Henry was not a fan of the Winchester Super-X ammo. It preferred the hot Hornady loads, and on average grouped at 3 inches. With the Winchester ammo, groups opened to nearly 4 inches. The Henry was the lightest of the rifles, and more recoil was noticeable as a result. We appreciated the rubber recoil pad. With the Henry, we found ourselves manipulating the lever quickly and getting back on target. The Henry had a longer throw than the Taylor’s, but shorter than the Marlin. It was fast to operate. We did notice on fully closing the lever, the lever plunger needs to be depressed, as does the trigger lock. What this means to the user is at the end of the stroke, you feel these parts react to the lever closing. Not a ding, just part of the rifle’s design you need to notice.

Our Team Said: The Henry All-Weather is a nice set up for medium and large-size game out to 100 yards with open sights. We’d add a scope and squeeze the most out of this rifle. If cost is an option, then the Henry makes a great choice and is our Best Buy.

To collect accuracy data, we fired three-shot groups from a bench using a rest. Distance: 50 yards with open sights. We recorded velocities using a ProChrono digital chronograph set 15 feet from the muzzle.