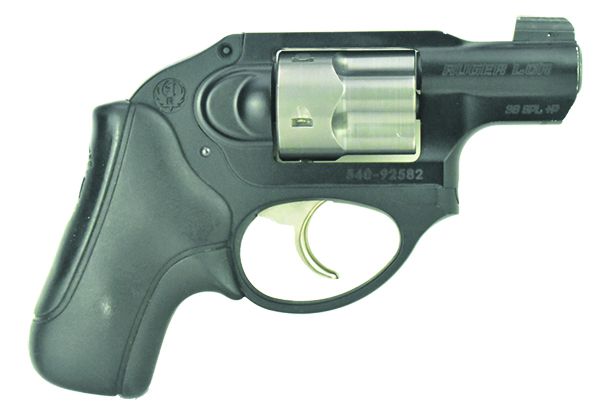 The Ruger LCR hit the market around 2010, and we were some of the early adopters. In the LCR, Ruger introduced a number of innovations we’d never seen on a wheelgun. For example, the S&W Model 60 is an old-style design, with a stainless-steel frame and a side plate that can be removed to access parts. The Ruger LCR has a monolithic frame made from aerospace-grade 7000-series aluminum. When you open the side plate on the S&W, lots of little pieces can be removed and sometimes even require specific tools to put them back in. The Ruger has a polymer fire-control unit that holds all of those small parts in the proper relationship to each other and reduces weight. Like the S&W Model 60, the cylinder is stainless steel, though the Ruger is PVD coated. It is also radically fluted to reduce more weight.

Ruger engineered a patented friction-reducing cam that produces a very smooth non-stacking trigger, so the effort required to move the trigger further to the rear doesn’t noticeably increase as trigger compression continues. It beats the unmodified trigger of the Model 60 hands down.

Also, our particular model of the LCR has an upgrade to the front sight and the grip. The standard front sight has been changed to an XS large dot. This has a larger-than-standard white circle surrounding a tritium insert, making it easy to see in normal or low-light conditions. The rear sight is the expected groove in the top strap of the receiver. The grips have a padded gel piece in the backstrap, thus cushioning the shooting hand just a bit more.

The LCR is not a hammerless revolver, though it looks like it. The hammer is actually contained within the shroud. The shooter does not see or manipulate it, making this a true Double-Action-Only (DAO) revolver. That also means there isn’t any hammer spur to foul in the pocket with the draw. The cylinder release, as is normal for Ruger, is a button on the left side of the frame that pushes inward, allowing the cylinder to rotate out to the left. The extractor rod isn’t any longer than on the S&W (there just isn’t more room on the design), and the same care must be exercised when extracting empties.

Accuracy was fair, averaging 2.36-inch groups, which was a good bit larger than the S&W or the SP101. Reliability was perfect. The sights are better than we frequently see on a small revolver, though they shot slightly high and left. The trigger is a real improvement over the S&W.

Our Team Said: The Ruger LCR is lighter than we prefer. If all you are going to do is carry it — no big deal. But this little gun requires practice to shoot well, and the recoil goes with that. Ruger designed a new cam system for the trigger on the LCR, producing one of the best factory triggers we have seen in a standard-production revolver.