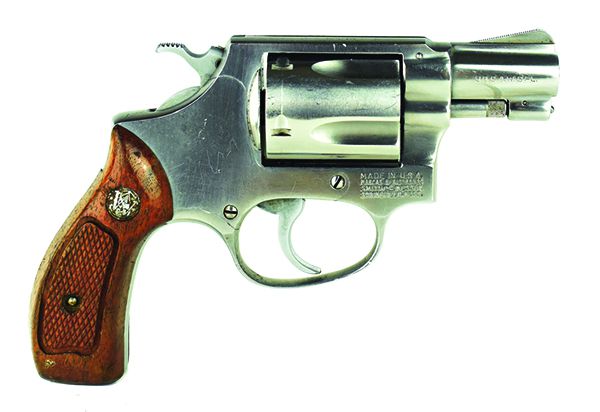 Smith & Wesson didn’t start using model numbers until 1957. Now, anything beginning with a 4 (and sometimes 5) is blued steel. Our 1978-vintage 38 Special is a Model 60, denoting that it is made of stainless steel. As modifications were made with a particular model, “dash” numbers were added, as in 60-2 or 60-3. Our sample is a “no dash,” meaning it was one of the earliest versions of that pistol. For proper self-defense use, its age really doesn’t mean that much unless wear or misuse has damaged some critical component in some way. Ours was in good shooting shape, though some exterior scratches marred the finish. Perhaps you can get $50 off the sales price because one you’re considering is scratched.

This Model 60 has a 1.875-inch-long barrel and sports a five-shot cylinder. The minimalist sights consist of a groove milled in the top strap, along with a ramped front sight. Both are the same stainless steel as the rest of the revolver and neither are adjustable.

More-modern S&W revolvers have a frame-mounted firing pin that is hit by the hammer at the end of the hammer’s forward travel. This Model 60 still has the hammer-mounted firing pin. It also shows a pinned cylinder, which makes sure the cylinder doesn’t loosen under repeated firings. This was determined, eventually, to be unnecessary, but we like over-built.

The cylinder is opened by pushing a checkered release on the left side of the frame forward, allowing it to swing out to the left. In keeping with the small nature of the handgun, the extractor rod is fairly short, sometimes to the point that empties don’t clear the cylinder when ejection is attempted and have to be removed by hand. Save your old toothbrushes for cleaning the inside of the extractor star. Various kinds of residue can build up between the extractor and the face of the cylinder. Enough build up will eventually cam the extractor against the breech face, making it almost impossible to rotate the cylinder. It’s pretty easy to prevent this problem with a minor amount of maintenance.

The small round-butt grips on our J-Frame S&W are easy to hide, but they don’t give all that much to hold onto. As a result, this small revolver can move in your hand under recoil, sometimes smacking the knuckles of the middle finger. That can get old quickly.

The hammer has an extended checkered cocking piece that is not as easy to hide and can foul in the pocket when drawn. We have seen many small revolvers modified by shortening the hammer spur or removing it entirely. That, of course, prevents single-action shooting, which isn’t that practical in defensive situations anyway. That means it shouldn’t be done that much in practice, either. S&W revolvers tend to come with mediocre triggers. Under the ministrations of a good gunsmith, however, they can be turned into an incredibly smooth work of art. Ours has not and is in as-issued condition, with the double-action pull measuring more than the 12-pound limit of our Lyman Gauge.

A good revolver shooter learns to stroke the double-action trigger, rotating it smoothly in a medium-speed rhythmic movement. When accomplished correctly, the revolver is very easy to shoot accurately and quickly. Jerk the trigger and that heavier pull is going to have you waving it around so that you’ll be lucky to hit much. This Model 60 reminded us that it can, in fact, shoot very well. The sights were the best regulated of the three revolvers tested, hitting center on the target and a bit low. It also reminded us that a little bit of extra weight can be an advantage. Lightweight revolvers tend to smack the palm, and the extra 6 ounces of weight in the Model 60 versus the Ruger LCR produced noticeably lighter recoil.

Our Team Said: As a firearm that could spend a lot of time in pockets or even down in the dirt inside an ankle holster, we really liked the Model 60’s stainless-steel construction. Just that little bit of extra weight from the steel over polymer materials made a difference in handling recoil.