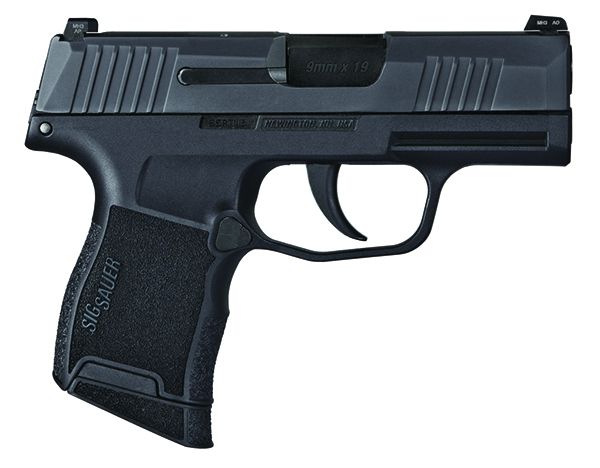 The SIG P365, both the standard 3.1-inch and its 3.7-inch XL Model big brother, have graced the pages of Gun Tests several times in the past (see the January, February, and March 2020 editions). They performed well for us receiving, at worst, a B grade. The shooting public seems to agree with us, because several of our sources cite this little pistol as the No. 1-selling handgun in the country as of this writing.

For comparison to the 38 Special Range Data below, our P365 chronographed at around 1072 fps using SIG V-Crown 115-grain JHPs that have been optimized for short-barreled pistols. Energy with that load was 293 foot-pounds, and groups averaged a mere 0.68 inch. That’s substantially more energy that the 38 Special rounds produced, and it was much more accurate, by a wide margin. The pistol also won the speed drills, as shown in the Drill Data table below. So just on ballistic performance compared to 38 Special-chambered revolvers, it’s easy to see why the SIG P365 has seen this kind of success.

But there are other reasons as well. For one, it is small enough to use for pocket carry. While this may not be our favorite method of everyday carry, we live on the Gulf Coast and it is hot here. Summer starts in mid-March and usually ends around the second week of deer season. To battle the heat, those who frequent the outdoors often find themselves armed with a small pistol in a small pocket holster, such as the DeSantis Nemesis (MidwayUSA.com, $20).

Another plus to the SIG pistol is its ammo capacity. SIG reportedly engineered the P365’s magazine first and then built the pistol around it. The pistol ships with a flush-fitting 10-round mag as well as an extended 12-round mag. Also, 15-rounders are available.

A third reason for the P365’s ascendency is the energy of a good 9mm. There are danged few shooting situations that can’t be solved with the round.

Elsewhere, the SIG Sauer P365 has good sights, a decent trigger and, while small, it is actually big enough to hold onto. All things considered, SIG’s P365 is a real winner, as sales figures confirm.

While we wanted to acknowledge the SIG P365, its great design, and the success it has had, it is not our intent to do a full review on a pistol we have already visited several times. Realistically, the Springfield Armory Hellcat, Smith & Wesson Shield, and several others could also have sufficed to see if they have totally and irrevocably supplanted a good snubnosed revolver for concealed carry.

Our Team Said: Small enough to fit in a pocket and carrying 10+1 rounds of 9mm, a small pistol such as the P365 does a lot right for comfortable concealed carry. Does a little 9mm snap in your hand a bit when fired? Of course. But felt recoil is less than the small 38s.