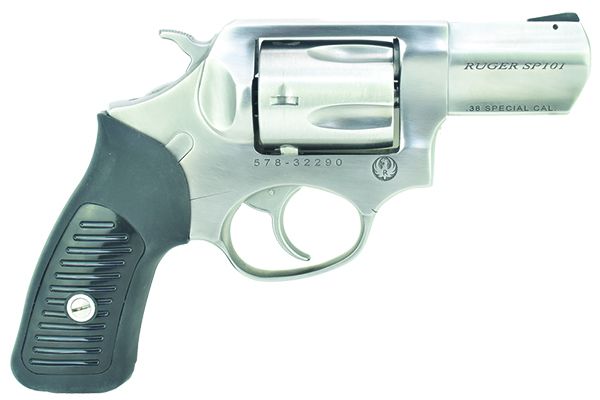 Introduced in 1989 and redesigned more than a decade later, the SP101 was brought to market as a replacement for the Security Six. While this is still considered a small-frame five-shot revolver, it is considerably larger and heavier than the LCR. The construction is solid stainless steel, and like the LCR, the fire-control unit comes as a group, with no side plate and no individual small parts. That can also make it more difficult to do a trigger job on the SP101, and our factory unit was a bit heavy with some stacking.

The bottom of the FCU ends in a stud to which is attached a one-piece grip. The grips do have plastic panels in them, but it is still a single unit that is very easy to replace if desired. In contrast to our other two revolvers, this grip is long enough to actually get part of the little finger on it, allowing a bit better control under recoil. With this SP101 weighing in at 26 ounces versus 13.5 ounces for the LCR, the heavier weight mitigates recoil. With the slightly larger size, we believe that the SP101 would be difficult to carry in the front pocket of even baggy cargo shorts, but it should still work in a winter-coat pocket. The overall size reminds us a bit of a 2.5-inch S&W Model 19, which is one of our favorite carry revolvers. The SP101 should carry equally as well as the Model 19 in a good belt holster.

We would also consider the SP101 as a good candidate for a home-defense pistol. Five shots will take care of most situations, but we would keep multiple good speed loaders nearby. HKS and Safariland both make good loaders for around $10.

Smith & Wesson revolver cylinders release by pushing the button forward, Colt by pulling to the rear, and Ruger by pushing in toward the hammer. The firing pin is frame mounted. There is a transfer-bar safety that must be raised up by the trigger before the hammer can drive the transfer bar into the firing pin, thereby firing the cartridge. Most cylinders are secured in the frame window via contact points with the breech face and the bolt. Frequently, a third point of contact is made at the front of the extractor rod. The SP101 instead adds a plate that pivots forward from the yoke into the frame, providing a very solid lockup.

The Ruger SP101’s rear sight is the standard groove in the top strap. The front sight, however, is a separate blued piece that is held in place by a roll pin and can be changed.

Required trigger compression was more than 12 pounds, as it was for the Model 60. Once we got used to the trigger, the SP101 shot a couple of great groups.

Our Team Said: Overall, the SP101 won the accuracy test, but only by a few hundredths of an inch over the used and aged S&W. The extra half-inch on the barrel actually provided a bit more velocity and the energy that goes with that. The extra weight made this the most comfortable of the three wheelguns to shoot. The sights consistently shot slightly high and right, though they were still just fine for defensive work.