Gun Tests Grade: B+ (OUR PICK)

We owe much of the 44 Magnum concept to the late Elmer Keith. Mr. Keith spent a good bit of the early to middle parts of the last century working with (and sometimes blowing up) hot-loaded 44 Special revolvers. As with many great experimenters, he did not let setbacks stop his work. Convinced of the practicality and efficacy of a max-loaded 44, he finally won Smith & Wesson over to his way of thinking, along with Remington ammunition. The revolver that became what we know as the Model 29 (and what Clint Eastwood made really famous in 1971) was introduced in late 1955. Initially hailed as the perfect all-round heavy-duty pistol, many folks quickly discovered that the 44 Mag generated a bit too much recoil for them. Quite a few divested themselves of their investment. We’ve heard a number of stories of almost-new Model 29s for sale, along with a box of bullets missing just six rounds. So, is the 44 Mag perfect for inexperienced shooters? Probably not. Is it an uncontrollable beast? Certainly not. Luckily, people quickly learned that you do not have to always shoot loads designed to vaporize velociraptors. The 44 Special can be loaded in a range from mild to dang-near 44 Mag velocities, and it works well for many situations. However, if we wanted to use it for defense against animals, up to small bears, we would want all the juice we could get, and the round and the revolver could supply that with any number of specialty loads and bullets. 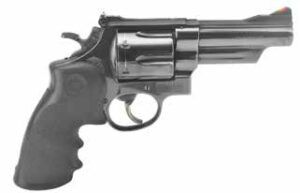 Our S&W Model 29 is a “dash 2” model, meaning it was from the third production series with “no dash” and “dash 1” preceding it. This revolver is from a different time when CNC machines did not exist and labor was cheaper than machine time. It has several features that the shooter won’t find on new pistols, such as a hammer-mounted firing pin, a pinned barrel, recessed cylinders, and a bluing job that is so bright and deep it looks like you could go swimming in it. Much of the previous designs required hand-fitting time that would probably make this pistol unaffordable today. We know current designs are stronger, safer, and more corrosion resistant, but we like the old style, too.

Our 29-2 has a 4-inch barrel on it that is beefier than some of the longer-barreled models. They were trying to stick a little more weight out front to counteract some of the recoil. The barrel also has a partial underlug that protects the ejector rod. It sports a white-outline adjustable rear sight and a ramped front sight with a red insert. The sights are very visible and easy to adjust. The hammer spur is wide and checkered. The trigger face is wide and smooth. Both of these are the surface finish we prefer. Both are case-color hardened. The hammer still provides a safety function, in that it is of a rebounding type that does not make contact with the primer unless the trigger is depressed and is still depressed as the firing pin reaches full forward travel. This arrangement also allows the revolver to be carried fully loaded because the hammer does not rest on a primer. As mentioned, the cylinder is recessed, allowing cartridge heads to lay flush with the cylinder face, bringing even more support to the case. The cylinder locks up at both ends, and the ejector rod is long enough to clear the cases out of the cylinder.

As with all S&Ws, the cylinder rotates counter-clockwise and is released by pushing a checkered latch on the left side-plate forward.

The original wood grips didn’t fit us, and we don’t remember ever having spoken to anyone that they really did fit. Unless you have Bill Jordanesque hands, we can’t imagine who they might fit, so we did the easy thing and changed them. We are running Hogue mono-grips at this point, and there are any number of other replacement grips available. Look for something that will fit a S&W N-frame with a square butt and you should be fine. Newer versions of this pistol have an internal lock, a frame-mounted firing pin, and updated grips.

The trigger is light and smooth, the result of trigger work, and which is absolutely perfect for double-action shooting, just as it should be. Timing was spot on, with the bolt dropping into the cylinder notches on cue. The best groups were obtained using the 44 Special loads and averaged 1.46 inches at 15 yards. Recoil with the heavier 44 Mag loads was brisk, and that is being polite. This really is one of those “carry a lot, shoot a little” kind of guns — until you load it with 44 Special. A marvelous defensive cartridge in its own right, the 44 Special loads were a ball to shoot.

Our Team Said: A hair faster than the Taurus and a bit more accurate, a used S&W Model 29 in Good to Very Good condition would be our choice if we thought our primary threat was two-legged.