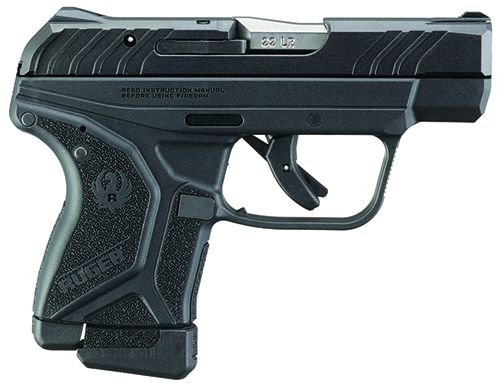 The grip design and forward cocking serrations are each well designed and effective. The barrel doesn’t recoil with the slide, but it tilts a bit as the handgun recoils and the cartridge loads into the chamber. The recoil spring is tiny. One rater likened it to a ballpoint-pen spring. There is nothing to be desired in handling the pistol, despite its small size. The slide is easy to rack, and there are two small protrusions on the rear of the slide to aid in cocking. This is a modern feature found on the S&W EZ Rack 9 and other handguns. We found it worked as designed and made for easy racking of the slide.

The safety has an odd-feeling operation at first. The lever doesn’t travel in an arc, but rather presses forward to take the safety off. The safety operates well, and it detents into position in a positive manner. However, it must be taken off Safe as the handgun is brought into action and before the pistol is in a firing position. When the handgun is held in the firing position, the safety would be difficult to manipulate without breaking the firing grip. The safety may be moved to the Safe position by moving the thumb rearward without breaking the firing grip. There is also a magazine safety that prevents the pistol from firing if the magazine isn’t in place. Some find the magazine safety to be a good touch, but we prefer not to have such a safety on a defensive handgun. The LCP II 380 doesn’t have this safety.

The LCP II 22 is supplied with a single 10-round magazine. We ordered another from SCGunco.com for $28. While this drove the price of the pistol up, it is still not an expensive handgun. But adding the magazine to the price brings the total cost of the LCP II with two magazines to $327, $41 more than the S&W. We feel that a pistol should be supplied with two magazines, but then this is a pistol that is found for sale in most shops for $309 or so.

We really like the sights; they are among the best fixed iron sights found on a (very) small handgun. The trigger features a safety-lever insert into the trigger face. Theoretically, the pistol might be carried with this lever as the sole safety, but we prefer a manual safety. This pistol is likely to be carried in a pocket, not in a belt holster. We began all firing tests with the action set to Safe.

At the range, we fired the Ruger LCP II 22 with the same loads as the other handguns. The LCP II isn’t a hard-kicking handgun by any means, but at only 11.2 ounces, it is the lightest handgun tested. There is some rearward momentum as the pistol fires. As we neared the end of the 500 Remington cartridges, the raters noted it was tiring to finish the firing program. It is perhaps unusual to fire a brick of 22s in less than an hour, but then that is what we do. The other pistols, larger guns, were largely indistinguishable in recoil. Even though the S&W is dimensionally more compact than the Glock, it weighs about an ounce more. The LCP II was a bit whippy after a few hundred rounds. But the LCP II is designed as a rimfire training counterpoint/understudy for the LCP II 380 ACP. In this regard, it works very well. Incidentally, it weighs slightly more than the centerfire LCP II.

During the firing, the LCP II Lite Rack lived up to its name. The slide is very easy to rack. The firing grip isn’t as good as we got with the larger handguns. This would matter more with a centerfire, but we still found that crunching the hand around such a small pistol sometimes resulted in the firing-hand thumb bumping into the slide lock. On at least a half dozen occasions, shooters allowed the support-hand thumb or firing-hand thumb to bump into the slide lock, locking the slide open. The thumb quickly moves to drop the slide when this occurred. We adopted an offset and thumbs forward attitude to cure the problem. We cannot call this 100% shooter error, so we nicked the gun on the slide-lock design. This is probably why the original LCP wasn’t designed with a slide lock. 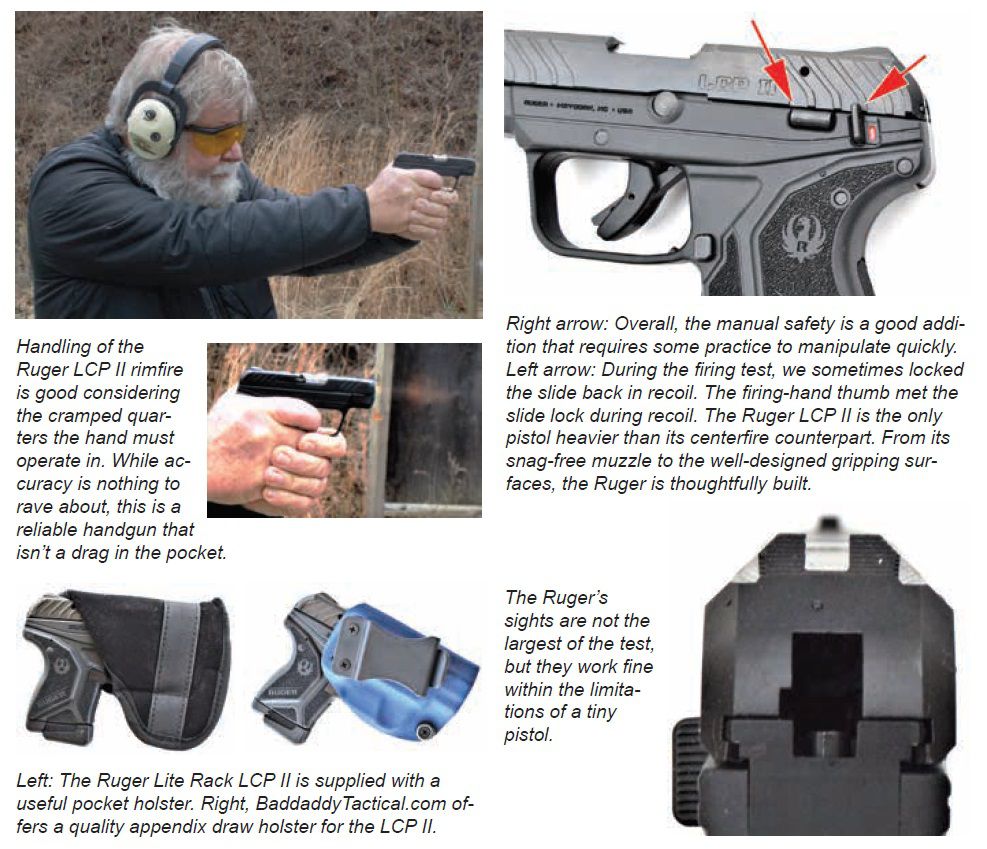 During the firing tests, there were several occasions, eight to ten, when the slide failed to lock open on the last shot, primarily with the subsonic loads but also at least twice with high-velocity loads. We do not think this was shooter related. In firing a total of 1000 cartridges, the Ruger LCP II demonstrated a high level of reliability. The thumb-in-the-slide-lock problem may be addressed with training. The failure to lock open on the last shot with subsonic ammunition is not a demerit because subsonic ammunition isn’t rated for this pistol.

The magazines were the least popular of the three pistols. Although they hold as many rounds as the other two pistols, and that is a neat trick in such a small handgun, the Ruger LCP II 22 magazines have sharper feed lips and are more difficult to load. Perhaps there wasn’t enough room to include an easy-load feature in such a light handgun. The pistol is supplied with a useful magazine loader.

As for absolute accuracy, this isn’t a handgun well suited to 25-yard testing. At 15 yards, the pistol grouped five shots into 2.8- to 4.7-inch groups, which we think is acceptable. The 7.1-pound trigger worked well and broke cleanly.

Our Team Said: The pistol is a good-handling handgun for its size, and the demerits — the slide-lock problem and the difficulty in loading the small magazines — are related to the pistol’s size. The pistol exhibited good performance in firing quickly at man-sized targets. It is accurate enough to take out a reptile at a few yards. Unlike the other two handguns, it doesn’t have great utility for hunting. On the other hand, it is a compact 10-shot 22 that is reliable with some loads. We have never tested a handgun this small we liked so much. 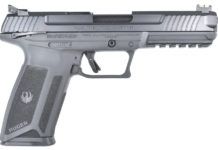 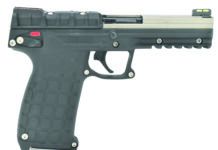