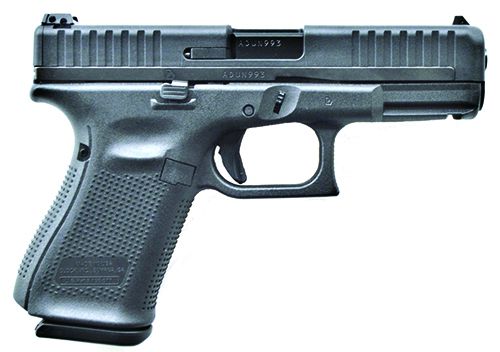 This turned out to be the least reliable handgun we have tested from a maker famed for reliability. The Glock 44 is a Glock 19-size handgun. The primary innovation of the Glock 44 is a “hybrid metal” slide. It is a mix of polymer reinforced with steel. No worries, steel is in the right place for strength. The pistol is identical in dimension to the Glock 19, a good size for a rimfire pistol. The locking block is different, and so is the barrel. The Glock 44 is supplied with the same type of frame inserts as the Glock 19 to ensure good handfit.

The Glock 44 features a 4.02-inch barrel and an overall length of 7.02 inches. After trying it in a half-dozen holsters in both leather and Kydex, the Glock 44 seems to fit Glock 19 holsters well. We used a JMCustomKydex.com Road Dog holster for most of the test. This holster offers a good mix of speed and retention. Holster compatibility allows draw and shoot practice with the Glock 44 if you own a Glock 19. This is a real advantage of the 22 version of a centerfire handgun. You just don’t get that kind of utility with a Ruger Standard Model or Browning Buckmark. The Glock 44 handles exactly like a Glock 19. The Glock 44 features a Glock Marksman barrel with fluted chamber. Unlike most other 22-caliber rimfire handguns, the Glock 44 may be dry-fired.

The Glock 44 differs significantly in weight compared to the Glock 19. At just over 14.5 ounces, the Glock 44 weighs less than the 23.5-ounce Glock 19 9mm. A significant difference is that the Glock 44 uses a 10-shot magazine. The magazine is designed to be an easy-load style and features an easily grasped follower spring depressor. The waffle-backed Glock-style magazine is designed for feed reliability over capacity, and it seems to accomplish the former goal. 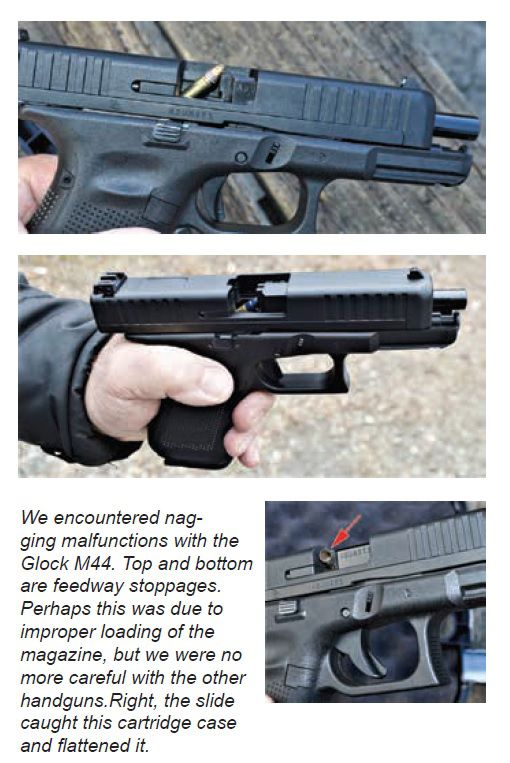 The pistol isn’t a fixed-barrel straight-blowback system, but rather incorporates a separate barrel. The Glock 44 disassembles in the traditional Glock manner. There are no departures from standard Glock operation and manipulation. The magazine release, slide locks, and take down are identical to other Glock pistols. The pistol features a Generation 4 grip with finger grooves on the front strap. The Glock 44 features the standard white-outline Glock sights. The rear sight is a variation on the Glock adjustable sight seen on the original Glock 17L and other handguns. An adjustment tool is included. The pistol features well-designed cocking serrations both front and rear, and the light rail is Glock standard.

The rimmed 22 Long Rifle cartridge feeds best in a single-column magazine. Primary concerns in designing a 22 rimfire handgun and magazine are the problems of a rimmed cartridge case, heel-based bullet, and sometimes dirty powder. We have noted in recent months that rimfire ammunition seems more reliable than ever, which is encouraging. There are still problematic, even finicky, 22-caliber handguns. The Glock 44 is not one of these. Just the same, it isn’t as reliable as it has been touted to be by some. In short, it was the least reliable of the three pistols, although it ran 100% with some loads.

Fired offhand, the lightweight pistol is Glock-like in handling. The 5.8-pound trigger is smooth and tight like a Glock. The Glock trigger has a certain amount of take up and then a wall, which the shooter breaks the trigger against. The lighter slide doesn’t allow as much of a balance against trigger-pull weight as a center-fire Glock, and some shooters may have a problem with this. It requires acclimation. All raters enjoyed firing the pistol, and we busily loaded magazines as we traded the pistol back and forth. We purchased a third magazine for $28 retail. It isn’t a fault of the handgun, but one drawback in training surfaced when firing at steel gongs at 15 yards. We saw little movement of the gongs and got little audio feedback. The 22 doesn’t have enough momentum to move targets that are sprung for the 9mm. When firing the Ruger LCP II, which developed even less velocity, we taped the gongs over as a reference and then checked for hits as we would a conventional paper target.

During the first part of the firing test of 700 high-velocity cartridges, there were a number of failures to feed, chamber, fire, and eject the Remington Thunderbolts. The first half-dozen failures were failures to feed the first shot. It took some experimentation to align the first round in the magazine properly for feeding. Occasionally, a spent case was caught between the slide and the chamber. All of these occurred during the first 200 cartridges. Then we had 200 trouble-free rounds after a modest break in and solving the first round feed angle problem. But then the Glock occasionally tied up, perhaps at a 5% rate, after becoming dirty at about 420 rounds. After burning up the Thunderbolts, we moved to other types. The Winchester M22 was uneventful. The first cartridge of the Winchester Super-X misfed twice. The CCI subsonic generally functioned; however, we did see failures to hold the slide open on the last shot and a couple of short cycles. The CCI Mini Mag, fired at the end of the test in the dirty gun, sailed through without a single failure to feed, chamber, fire, or eject. 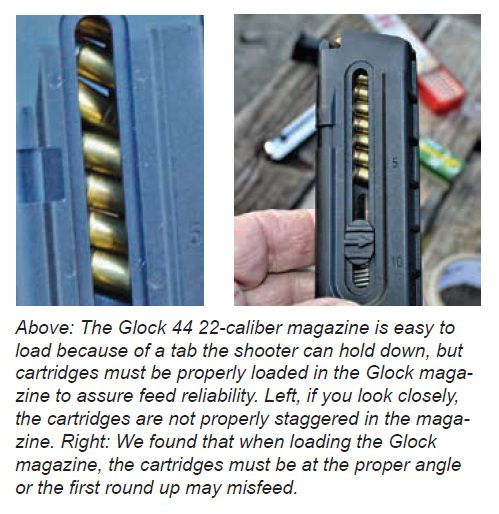 In some cases, we believe the shooter may have been at fault. The Glock M44 rimfire demands that cartridges be carefully stacked in the magazine, not simply dropped in as you hold the follower down, and the angle of the first cartridge to feed is important. Once the first cartridge fed, the rest were likely to. At one point we noticed a staggered off-center cartridge about five cartridges down before we began firing and fixed it. These are wide magazines that fit into a Glock 19 frame designed for high-capacity 9mm magazines. The other 22-caliber pistols use slim magazines. We were glad the Glock is supplied with two magazines, but we really would have liked to have two more during the range work.

The pistol handles well with minimum recoil. It could be an able trainer for those deploying a Glock centerfire for personal defense. The pistol is also a viable trainer for young persons or anyone wishing to learn to use a handgun. Because the sights may be changed for any number of aftermarket types, compatibility with Glock pistols is excellent, we thought. When discussing the addition of night sights to the Glock 44, one maker advised they do not recommend their iron sights be shoehorned into the polymer hybrid slide. Time will tell.

After the troubling initial malfunctions and then a long period without any type of tie up, we were really enjoying the Glock M44. We discussed cleaning the pistol, but instead doused it with lubricant to make a 1,000-round test of reliability. On the benchrest, we used three loads. The pistol proved accurate enough for most any use a 22 will be put to. With groups of 1.45 to 2.0 inches at 15 yards, the Glock was the most accurate of the three handguns. While it is also the largest handgun, this was good performance.

Our Team Said: We find the Glock 44 to be a good trainer and is also useful as a field gun for small-game hunting or clearing away pests and rodents. The 22 LR is low on the list for personal defense, but if you cannot tolerate recoil or this is what is on hand, you are far from helpless. But be certain that the pistol is reliable with a specific load that you choose. Downside: It had nagging malfunctions that would have failed a personal-defense handgun.