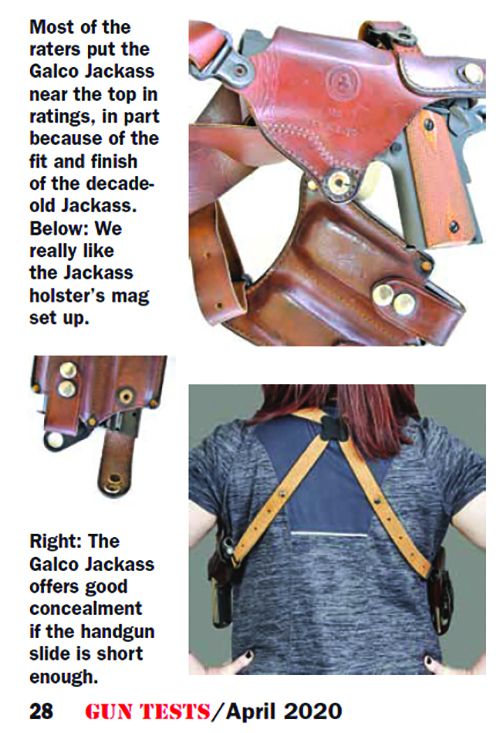 Good review. Bad picture. The top picture on page 28 of the April Issue is not a Galco Jackass. I have a Jackass and it doesn’t look anything like that. The bottom picture appears to be correct. Out of curiosity, what kind of holster is shown in the top picture? — AJ

AJ: I double-checked to be certain. The top picture is a Jackass, just an older one. I gave it away after the article printed. The holster illustrated with the female wearer is the newest and “improved” Jackass. The newer one just looks a little different. — Bob Campbell

I noticed one of the letters in a recent issue from someone who liked his XD-S 45 ACP but hated the trigger. I had the same problem with my XD-S 9mm. I bought and installed a BRZ trigger from Overwatch Precision, and it was terrific. No change in springs is required, but the new trigger got rid of that horrible take-up, and it breaks cleanly. Highly recommended. — John

John, thank you for the tip. For our other readers, the Overwatch Precision BRZ Trigger is a semi-flat-faced, direct drop-in replacement for the XDS OEM trigger. Each trigger shoe and trigger safety tab is machined in the USA out of 7075-T6 aluminum alloy, and Type II and III anodized. It has a hybrid flat/curved form. The addition of this trigger alone does not change the pull weight. However, pre-travel is reduced. According to the manufacturer’s page (OverwatchPrecision.com), the trigger will only work in post-recall XD-S handguns. If you go this route, we recommend you have the trigger installed by a qualified gunsmith. An accompanying Powder River Precision Trigger spring and sear kit is said to deliver a half-pound reduction in trigger-pull weight. — Todd Woodard

To Joe Woolley: I read your excellent article about 308 bolt-action rifles in the April 2020 issue of Gun Tests. However, I was puzzled by the muzzle velocity data for the Black Hills ammo on page 7, which shows velocities ranging from 1098 to 1139 fps. Per the product number for the Black Hills ammo shown in the table (MidwayUSA.com 280175), the MidwayUSA website shows a muzzle velocity of 2650 fps. So, is the muzzle velocity data in the table erroneous or was your testing staff using an alternate low velocity ammo?       — Paul

I read with interest the 308 Winchester Range Data in the April 2020 issue of Gun Tests. The muzzle velocity and associated muzzle-energy data for the Black Hills 168-grain BTHP loads look decidedly low. I would guess that the chronograph malfunctioned and that the shooter didn’t notice.  — John M.

No, this was my error in not transferring corrections from a proof Joe reviewed to final production. The corrected table with all the 308 loads runs below. Thanks to several other readers for catching it as well. — tw 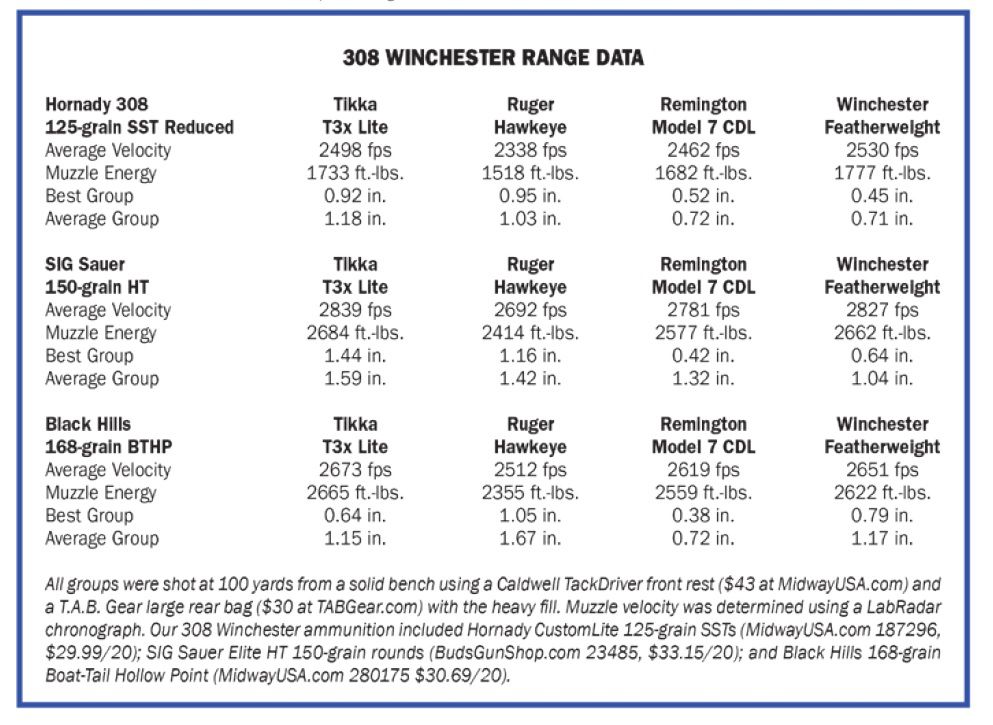 Do you have any idea why Winchester would put such a slow twist rate on a current production 308? It really limits bullet selection. Newer long-range 30-cal bullets are too long for such a slow twist. I almost bought an older Winchester Model 70 22-250 heavy-barrel varmint rifle a few months ago. I ran the serial number with Winchester and found out that it had a 1:14-inch twist. That used to work for 50 grains and below, but now even the Hornady 50-grain Varmint Grenade recommends 1:10. Thank you. Great publication. — Douglas

Hey Doug: I would guess that the tooling to make barrel-twist changes isn’t that easy to replace, and, overwhelmingly, the loads for those barrels are still mostly traditional styles. But as the performance of longer bullets continues to shine, I’d guess more and more rifles will have updated twists. It has already happened in the AR market. — tw

Women of a Certain Age Carry

Some women, especially those 50 years of age and above, would like to carry a firearm, but they don’t because the guns are:

Has your magazine ever addressed this age group of women specifically? If not, could you in the future, or should these women only hope someone else will protect them?              — Vincent

I think we can get something going on that. Thanks for the idea. Please send along any guns that you’re interested in. —tw

Certainly the Ruger LCRx in 3-inch 357 Magnum deserves to be in this grouping. IMHO, it’s definitely a best buy among these examples and the easiest to carry. A Rossi or Rock Island firearm has to carry its own weight. My wife has a 1911A 9mm Rock Island that sings on any stage (no jams and accurate), and she loves it, but it’s brand name clout is minimal. My experience with Rossi has been typically, “Why bother, when for a few bucks more you can get a much better (whatever) and you’ll get the extra paid back when you sell it.” Colt seems to want to own the high ground called “overpriced.” Actually, I wrote Ruger a couple of months after the 2-inch LCR came out and said don’t wait, get the 3-inch edition in the works because that’ll be a much better version in most circumstances. Glad they did.    — Bruce 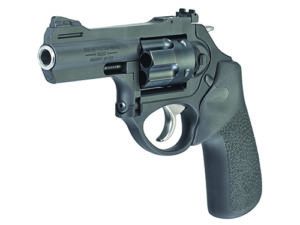 Hey Bruce: The Ruger LCRx 3-inch 357 Magnum 5444 does indeed deserve some consideration. We’ll see what we can rustle up. — tw

I just received 2000 rounds of 10mm and 45 ACP with aluminum casings. Not by choice; they substituted it for the brass I wanted. Legal matters are in motion to get my money back or the correct item I wanted. Anyway, I’ve heard aluminum cases are not safe to shoot, so have you done any testing on the safety and reliability of aluminum-cased ammo? I really like Gun Tests magazine.       — Peter

Hey Peter: Aluminum cases are fine to shoot. They just can‘t be reloaded like brass. Some ranges don’t allow aluminum-case use because the range harvests brass for recycling, and they don’t want to sort the aluminum out. We often use aluminum-case ammunition in our tests. No safety concerns in more than 20 years. Shoot and enjoy. — tw

Your tests are fantastic. Unbiased, factual, thorough, accurate and performed by knowledgeable individuals. What have you found to be the three most concealable 40 S&W-caliber handguns? — Parnie

“Most concealable” is an unusual request for a 40-chambered handgun. The Kahr P40 probably should be on the list. S&W’s M&P40c Compact would be another, as would Springfield’s XDM 3.8 Compact. — tw