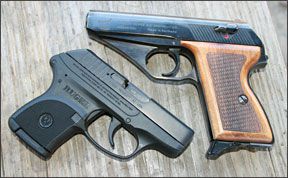 Pocket pistols chambered in 380 ACP may seem like a recent trend, but the 380 cartridge has been around since 1908. During WWII, Colt, Walther, Mauser, Beretta, Sauer and others built small, compact pistols for this round. There are numerous examples of these old-school pistols still available. The HSc was Mausers attempt at building an inexpensive pistol in 1936. It was the first time Mauser used stamped steel in its pistol designs, and the handgun was originally made for the commercial market. But during WWII, the German military purchased more than 160,000 HSc pistols, mostly for the countrys army and naval forces. The HSc was produced and imported through 1977, and online and in used gun-shop cases, you can still find these sleek pistols. And they can be had for a song. So we wondered, if we had our druthers, would we chose an old-school HSc with its pedigree or would we prefer a contemporary pocket pistol such as the Ruger LCP, a more recent and contemporary design thats actually a knock-off of the Kel-Tec P-3AT pistol?

Though these pistols may seem at opposite ends of the spectrum for self-defense use, they were both designed for ease of manufacture, consistent reliability, and the ability to be easily concealed. Our testers compared the two pistols on cost, utility, and concealability. Here is what they found:

The Mauser HSc was purchased online, and upon inspection it did not look like it had ever been fired. It was in pristine condition. According to serial numbers and marking, it was imported into the U.S. by Interarms in the 1970s. The HSc has a modern look to it like the LCP. The irony of the Mauser HSc is that it was Mausers first attempt to make a cheaper, easier to manufacture pistol. Next to the high-tech Ruger, the Mauser exuded old-world craftsmanship. The blued steel and wood grips were definitely traditional in todays polymer-texture and matte-black world.

The HSc has a thumb safety on the left side, which is rotated up to fire and down for safe. It is a blowback action with a traditional DA/SA trigger. To field-strip the HSc, the lever in the front of the trigger must be depressed and the slide retracted, then allowed to move forward and off the frame. The Ruger requires a pin to be removed, and though just as easy as the HSc to disassemble, pins have a way of getting lost. Buy an extra one or two. There were features on the Mauser that newer pistols shun, like the European, butt-style magazine release. This was awkward for those initiated with thumb-release magazines.

At the range, the HSc had little muzzle flip even with the hotter Hornady cartridges. We did find the HSc failed to chamber the Hornady hollowpoints, and we attributed that to needing a break-in period and to the HSc being built at a time when hollowpoint pistol ammunition was just coming into its own. We fired a few boxes of round nose FMJ rounds without a hitch. If we carried the HSc, we would definitely test our carry ammo through it for consistency and reliability. The trigger was nicely curved, and though the pull weight was about 20 pounds, we found we could fire the HSc accurately in double action. In single action, the trigger pull was more than 7 pounds on average, which was close to what the Ruger was in double action.

Testers felt the shape of trigger and the fuller grip made the HSc easier to shoot more rapidly. The sights for both the Ruger and the Mauser were fixed; a blade up front and a notch in the rear. They also liked that the slide stayed open on last shot. The only way to close the slide on the HSc was to withdraw the magazine then reinsert it, which caused the slide to move forward.

Our Team Said: Many liked the traditional metal and wood construction, but the trigger was almost intolerable compared to modern pistols. Concealability was less than the Ruger LCP by a far cry. The ability of the HSc to function with modern ammo would need to be further explored if ball ammo was not used.

The Ruger debuted with a lot of fanfare in 2008, and in these pages has been graded highly. Top line is that the LCP has a very nice DA trigger, the magazine release is where most shooters expect it, and it chews through ammo with all style of bullet types. The lack of a slide stop means the sides of the pistol are smooth and snag free. The HSc was similarly smooth, but its slide stayed open. A manual slide stop is found on the Ruger LCP, and this feature is best used when handling the gun around other shooters.

The weight difference between unloaded guns was slightly more than 11 ounces. The hefty HSc is best carried in a holster, while the Ruger can be carried much more easily in a pants pocket. A trait of such a little pistol is that it has a lot of muzzle flip. The hot Hornady rounds had some testers trying to hang onto the pistol in fast fire trials. Among our team, most shooters would prefer to have the slide stay open after the last round is fired. The magazine of the LCP was simple to load without busting a thumb. It did carry fewer rounds than the HSc, but the LCP made up for it in concealability. Our Team Said: Ruger LCP succeeded in being a highly concealable pistol. It functioned flawlessly with all ammo shot.