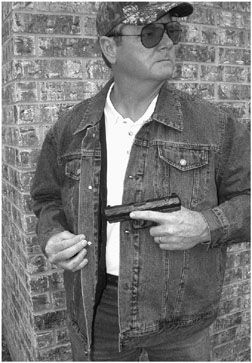 One result of the union struck between Smith & Wesson and Walther has been the production of polymer pistols distinctly different from the Smith & Wesson VE series, which closely resemble the old Sigma line of pistols. These new SW99 pistols are chambered for 9mm, .45 ACP and in .40 S&W.

These pistols are double-action only, striker-fired guns utilizing a polymer frame with interchangeable backstrap plates to accommodate different size hands. The rear sights are adjustable for windage. To change elevation, four interchangeable front-sight blades are supplied.

Elsewhere, the Walther America pistol is virtually the same as the Smith & Wesson product, save for the Walther offers a decocking feature and a different trigger guard. Walther also offers its pistols in more than one color combination.

To see if there were meaningful functional differences, we tested a Walther America 99QA with MIL (dull green) finish and the Smith & Wesson SW990L. Both .40 S&W guns operated with a hinged trigger that required a shorter movement than the standard models, hence the Walther designation of QA for Quick Action. Side by side, here’s how these stablemates fared:

[PDFCAP(1)]
We tested a 9mm version of the Walther America polymer pistol in the April 2001 issue. At that time, the gun cost $799, or about $30 more than the current asking price of our .40 S&W caliber test pistol. The .40’s frame was also different from the original model. Gone was the contour on the inside of the trigger guard that swept upward to the trigger. The area of the frame immediately behind the trigger was no longer boldly indented. The selection of available colors and finishes has also been expanded. Choices include a black frame with black Tenifer finish slide. A silvery titanium-coated slide was another option, as well as a new frame color called Desert Sand.

Our .40 P99QA had a green Mil finish, but all of the extra back straps were black. Grip texture was a sparse pebble finish on the backstrap and side panels. The front strap was molded with wide horizontal lines over a profile of modest finger grooves. The front strap was undercut at the trigger guard where this contour was filled with the ambidextrous magazine release. The release is a lever action design rather than a push button, and similar to the HK system. Only members of our staff with the largest hands were able to reach the weak-side lever with the thumb. Most of us used either the middle or index finger of the strong hand to release the magazine. Magazine capacity was 12 rounds, and the basepads were flat, adding little to the length of the grip.

Removing the top end of the Walther America P99QA was very simple and in so doing, we found what may account for the difference in price between the Walther and Smith & Wesson products. This was the decocker panel found atop the slide to the left and rear of the ejection port. When the pistol is cocked, the striker indicator protrudes through the rear face of the slide. Press the decocker and it goes into hiding. Pull down the flush-fitting panels found midway down the frame, and the top end simply slides off to the front. Compared to other striker-fired pistols, including the Smith & Wesson 990L, the only way to decock the pistol for disassembly was to press the trigger. Recharging the gun required moving the slide to the rear approximately 0.4 inch.

With the top end removed we saw that the slide was supported by polymer rails with two steel contact points seated fully to the rear and two more inlaid at the front. The recoil spring was a flat wound spring, and upon disassembly remained captured upon the guide rod. Neither of our guns suffered a malfunction of any kind, but we did not like the look of the guide rod. Not only was it flexible, but it actually sat curled under between the front of the slide and the foot of the barrel.

Atop the slide was an adjustable rear sight with two white dots. The four different front sight blades were marked 3, 4, 5, and 6. At the range we needed the gun to shoot lower to match our 25-yard point of aim, so we changed the front sight using the supplied Allen wrench to remove the small bolt in the underside of the front blade. The blade was press-fit into place, and screwing in the bolt acted to spread the fitted area from underneath. We saw no evidence of this arrangement dragging on the barrel, and the front sight never came loose. Each front sight comes with a white dot to match the rear unit, but if you prefer a plain sight, the interchangeable blades can be seated backwards to offer a blank vertical post.

For our benchrest session, we installed the largest of the backstrap plates, which included extra material above the hand in the area of the beavertail. The plates slide into place and are held by a hollow roll pin that is set and driven by a supplied yellow plastic punch. Our [PDFCAP(2)] consisted of 165-grain and 180-grain hollowpoint rounds from Black Hills Ammunition and 155-grain Hornady TAP FPD rounds. From a sandbag rest at 25 yards, our top performer was the Black Hills 165-grain JHP EXP rounds, which recorded five-shot groups averaging 2.5 inches.

The Walther America QA trigger was set at 9 pounds of resistance — certainly not a light trigger, and the pull length to letoff was less than 0.25 inch or, one-third less than the movement required by the Walther America DAO models. In our opinion, the trigger gave very little feedback to the shooter. One shooter remarked that it felt like a heavy single-action trigger that was too vague to read from shot to shot. During our rapid-fire session, we discovered that when shooting offhand, we had to pay the Walther America P99QA a lot of attention.

An additional distraction was when one of our 12-round magazines refused to drop free when loaded with more than eight rounds. We think the magazine was beginning to bulge. Perhaps the follower and spring were not stacking properly, but once empty the magazine moved freely in and out of the frame.

[PDFCAP(3)]
Naturally, we found both striking similarities and curious dissimilarities between the Smith & Wesson 990L and the Walther America P99QA.

The magazine well on the 990L was not beveled, as in the case of the Walther. The face of the front strap was flattened, giving the S&W gun a square profile. Features that seem to be held over from the old Walther design were found on the receiver. A matching “checkering” pattern was applied to the front and back straps. The upper surface of the grip was relieved, creating a distinctive thumb groove. Inside the trigger guard, which was rounded off instead of rectangular, there was a raised surface that reached toward the bottom of the trigger. But, the top end differed from that of the Walther America by featuring both front and rear cocking serrations, which were wider in the front than in the rear.

The barrel hood was flat-topped, but the surface area was slightly less broad. The slide itself, finished with Melonite, was flat-topped on both pistols, but the surface on the SW990L was left smooth, not like the Walther’s, which was lightly grooved to reduce glare. The barrel lengths were the same, but the way the slide housed the muzzle was different. The Smith & Wesson barrel protruded from the slide and was finished with a rounded edge and shallow crown. The Walther America barrel was blunt with a deeply cut crown. The Smith & Wesson slide was slightly shorter.

Each pistol was fitted with a long external extractor that also acted as a chamber-loaded indicator. But we believe, and the manufacturers warn, that the indicator position was not distinctive enough to be relied upon solely for loaded confirmation. A red indicator dot was also exposed by the shift in the extractor, but it was too small and was barely visible when the shooter looked at it from slightly above and to the side, so we wouldn’t put much trust in it.

The primary functional difference between the two guns was the lack of a decocker. Another feature that we felt made a difference was at the range, we could feel the inside of the S&W’s trigger guard dragging against our finger. Perhaps the ramp leading up to the trigger was meant to offer the correct index, but we think it was an impediment to the trigger press.

The ability to modify the backstrap was helpful, in our opinion, to provide a better grip for the strong hand. But the use of polymer made for a slippery surface, and neither gun offered a suitable grip pattern that helped maintain contact with the weak hand, we thought.

From a sandbag rest, we found that each of our test guns performed very nearly the same with the Black Hills 180-grain JHP ammunition. Both guns shared an average group size of 2.8 inches with this ammunition, but this was the best we could do with the Smith & Wesson. Neither the 165-grain rounds nor the Hornady TAP ammunition seemed to be its cup of tea.

Shooting unsupported, we felt that the SW990L, like the Walther pistol, required a lot of attention to shoot accurately during rapid-fire drills. Even though the Smith & Wesson trigger felt like it required less movement than the Walther America QA trigger, second shots seemed to suffer most. Reconciling a consistent grip with a consistent trigger movement was too challenging for our tastes.

Overall, we think that providing a short-action trigger on a pistol without a mechanical safety might be putting too much of a burden on the shooter. Without the presence of a true safety, the SW990L reminded us of a single-action pistol that can be cocked, but not locked.

Gun Tests Recommends
• Walther America 99QA .40 S&W, $770. Don’t Buy. Saddled with its lever-action magazine release, short trigger, and a decocker that required partial movement of the slide to reactivate, we think the Walther America P99QA would require undue amounts of training to be used successfully. We think there are other better polymer .40s.

• Smith & Wesson SW990L .40 S&W, $694. Don’t Buy. We found the SW990L to be a reliable pistol that provides considerable power in a lightweight package. But because the SW990L gun has no mechanical safety, we’re uncomfortable recommending it.