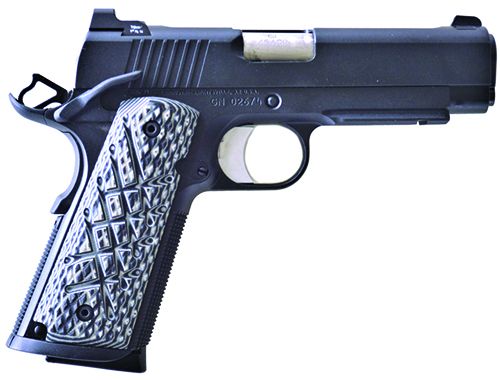 This is sometimes called the Gun With No Name, as there are no slide markings. We really like the smooth slide treatment. The serrated dished out slide rib is well done. We had elected to test three full-size 1911 handguns, one of them with a rail, and two Commander types, and felt that one should have a rail for comparison. While this isn’t an exact comparison, we also wanted to understand what the reader will get for his money.

It just happened the Operator series is a good value and has the rail, it also just happened we were able to find a Guncrafter for sale without a long wait. The Guncrafter is a Commander-length handgun delivered with a rail and other custom-grade features. The Guncrafter is a genuinely individual pistol without a clear resemblance to other 1911 handguns save in a general way. Every piece, including the sights and safety levers, are cut from bar-stock steel; there are no cast, MIM, or plastic parts in the Guncrafter.

One of our raters is not only a gunsmith, he has taught at the university level. He felt that the Guncrafter was “out of his weight class” because of its build quality. The fit is tight, very tight. He called the assembly a “grease fit,” which the other knowledgeable raters had not heard before. This refers to the fit of the slide to the frame. When the slide is racked, there are no hitches, and you really do not feel the locking lugs locking or unlocking in any significant way. The pistol features a heavy recoil spring. This did not impede function. The slide features an absolute straight line to the muzzle. The cocking serrations are angled properly for a good handfit. The light rail fit properly in the Galco N3 and Stryker holsters on hand for testing. Attention had to be paid to the draw angle with the N3, however. The barrel features a well-done target crown. Though tight, the pistol could be field stripped without a bushing wrench. The ambidextrous safety features a good, crisp fit. The grip safety is a well designed beavertail. We noticed it is more upswept than the others, but all were good designs.

The sights are Heinie types cut from bar stock. The rear design features a pronounced barrier for racking the rear sight on a belt or boot heel if desired. During the test, we used this feature several times. One of our raters noted that it is pretty difficult to rack any handgun with a rear sight, but if you have only one hand available, once you get the magazine loaded, it is easy enough to release the slide by using this sight, racking it on the belt to release the slide. Racking the slide to load the chamber using the rear sight for leverage is much more difficult. The rear face of each sight is nicely serrated. The sights feature a single dot in the front and a single tritium dot in the rear sight. This scheme, sometimes called the 8 ball or Straight Eight, works well. The Nighthawk Falcon is supplied with the same Ledge sights. The front strap checkering is very well done. The mainspring housing is a nicely checkered magazine well. This unit funnels the magazine into the magazine well and makes for excellent speed. We really like the grips. Notably, four of the five handguns tested feature excellent grip designs — the Dan Wesson rubberized grips are the only exception. The G10 grips are wavy at the front and feature a scalloped-out portion to address the magazine release. The rear of the grips feature larger raised portions. These Shredder grips are excellent designs. There is no uneven checkering or lines that wander. The uninterrupted pattern of the slide serrations are nicely done. The frame and mainspring housing lines are parallel — there’s no slippage and no slop.

The slide-stop-pin treatment is very interesting. Our gunsmith has used a ball end mill to work out the frame then measuring the bevel and filing the slide stop down. The counter-sunk look is appealing. The rationale is that if the finger contacts the slide stop during firing, it may cause a malfunction. If you have attended shooting matches, yes, it happens, but we have never had a malfunction of this manner in testing many 1911 handguns. Just this same, this is a hallmark of a high-end custom handgun. Another hallmark of a high-end 1911 is the trigger action. The Guncrafter pistol has a bit of take-up before the trigger gets tight and then breaks at 3.5 pounds. The slight movement is a good choice for a handgun that may be carried for personal defense. The trigger is arguably the best of the test. The pistol was fired in the combat firing test with good results. The Heinie Ledge sights provide an excellent sight picture. The trigger is excellent as well, and the weight offers balance. Despite the shorter sight radius the Guncrafter was at least comparable to the 5-inch guns during the combat firing tests, besting the others and rivaling the excellent results of the Nighthawk Falcon. In absolute accuracy, the Guncrafter Gun With No Name was the most accurate handgun tested. The most accurate results were a 1.4-inch group with the Fiocchi 200-grain XTPs. While Guncrafter was the most accurate handgun tested from the benchrest, it was not the most accurate in combat firing, by a slight margin.

During the testing, we obtained a new design IWB holster from Bitterroot Gun Leather ($155 at BitterrootGunLeather.com. ) This holster is a perfect fit for the Guncrafter rail. The draw is sharp. The holster also features a nice foot that keeps the weight of the handgun off the sciatic nerve.

Our Team Said: After firing the pistol and looking over the results, the Guncrafter 1911 earned a solid A rating.