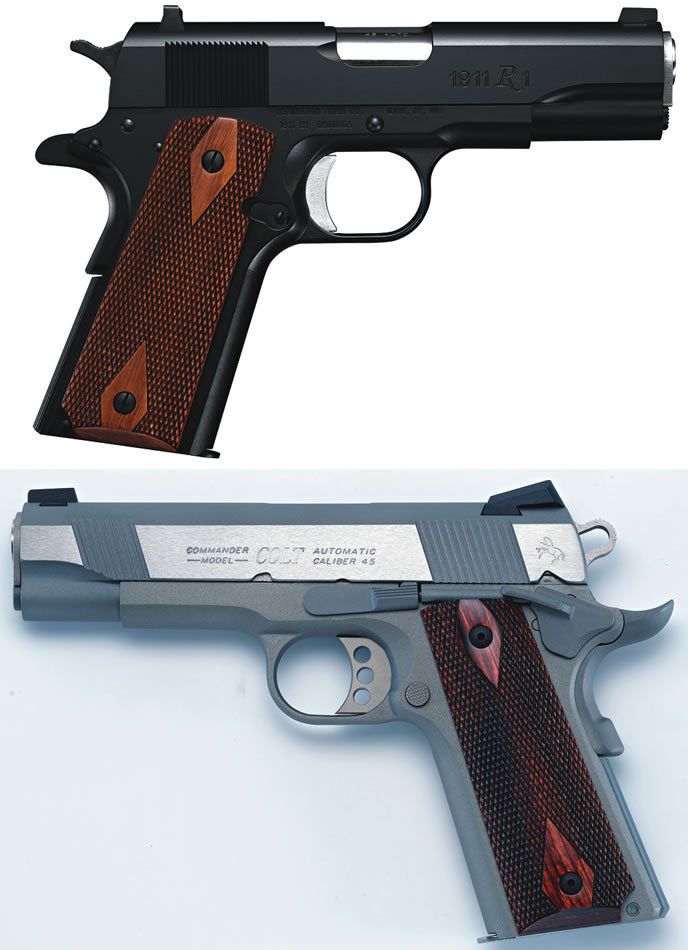 While the debate continues on about which firearm is the best combat handgun, the 1911 remains in the running, and, according to some, it stays at the top of the heap. The 1911 has many applications including target practice, competition, and self defense, of course.

Simple pride of ownership is never a bad reason to own a handgun, but personal defense remains the defining characteristic of the 1911 handgun. For many, the 1911 represents the best choice for repelling boarders or facing members of the criminal class.

For this task, the pistol has good features, including speed to an accurate first shot that is virtually unequaled, reliability, and accuracy. Also, the 1911 is thin enough for concealed carry. The problem is a full-size gun’s profile and weight. The 1911 can be concealed effectively with proper holster selection, that isn’t the question. The question is the comfort level the individual is willing to accept. For many of us, the steel-frame Commander with its -inch-shorter slide and barrel solves the problem. The Commander pistol is less likely to pinch the bottom when seated, and it is faster from the draw as well.

Reader Steven Mace of Arizona wrote us in April 2014 asking if we would consider testing a list of 1911A1 Commander-style pistols. He wrote, “If you or your staff has any experience with any of these pistols, I would appreciate any information that could be shared. Or, are there any plans to evaluate any of these pistols in the near future? My intent is to find and buy a 1911A1 for concealed carry for a person who is left-handed.” His included list of desired handguns from top to bottom were the Colt XSE O4012XSE, Kimber Pro Raptor II 3200118, Para USA Black Ops Recon 96697, Remington 1911 R1 Carry Commander 96335, Sig Sauer 1911 Carry Scorpion 1911CAR-45-SCPN, Smith & Wesson SW1911SC 108483, and Springfield Armory Lightweight Champion Operator PX9115LP (September 2012, Grade A-). We evaluated a Kimber Tactical Pro II (Grade A) and a Carry Scorpion (Grade B+) in the October 2014 issue, and further honoring his request, in this installment we test the Colt XSE Commander and the Remington R1 Commander.

The Colt is the top-of-the-line Commander and the Remington is a less expensive R1, which actually favored the R1 when we started because we prefer less expensive products, if they perform on par with more expensive ones. We felt the comparison was valid based upon quality, accuracy and reliability, so here’s what we found.

This was the price of our gun at the time of the test from retailer CheaperThanDirt.com. Prices may vary. It had a distinctive blued-steel-and-walnut look that has an appeal to many of us. The fit and finish were good. The barrel bushing was stainless steel and so was the trigger. The wood grips were not custom grade in terms of appearance, fit, and feel, but they were acceptable. The checkering was machine cut.

The Remington showed attention to detail in the feed-ramp polish. The proper 1⁄32-inch gap between the two parts of the feed ramp ensured feed reliability. The ejection port was lowered for better ejection.

The Remington used a GI-style hammer rather than the almost universal skeletonized hammer or rowel (spur-type) Commander hammer. The pistol also featured a short trigger opposite a flat mainspring housing. This was unusual, but it worked okay.

The combat-style sights were a little taller than most. The rear sight was larger than a GI sight, but it wasn’t a Novak type. The front sight was dovetailed into place on the top of the slide, and we gauged them both to be well fitted.

The slide-lock safety exhibited a solid detent. The grip safety properly released its hold on the trigger about halfway into compression. During the firing of 250 rounds of ammunition, including JHP loads, with Remington, Wilson Combat, and Chip McCormick magazines, we experienced one malfunction during the first shots.

This was among the oddest malfunctions we have experienced, and no one remembers quite the same thing ever occurring. The Remington fired several rounds without a problem and then had a misfeed.

There was a live round with the base rising out of the ejection port. It was angled out of the port with the nose pointing into the chamber. There was another live round attempting to feed and caught under the other live round’s nose. We are not certain how this happened. After the initial hiccup, the Remington did not repeat this problem.

Trigger compression was even and free of creep at 5.0 pounds, which aided our ability to shoot groups acceptable for personal defense, but pedestrian by modern standards. The R1 Commander shot Hornady 200-grain XTPs the best, producing a 2.2-inch 25-yard group average and a best group of 1.9 inches. We feel that this is credible performance for a 4.25-inch barrel 45-caliber pistol. The worst averages were with the Federal 230-grain HST JHPs at 2.6 inches on average, and the same result for the 200-grain semi-wadcutter handload. As the accuracy table shows, the Colt did considerably better across the board, shooting average groups of 1.9, 2.2, and 1.6 inches, respectively, for the XTPs, HSTs, and SWCs.

Our Team Said: The Remington R1 Commander fired 249 rounds without a problem. The single malfunction, occurring with the first magazine, may be written off to a break-in malfunction sometimes exhibited by 1911 handguns — but the Colt did not require a break in. Also, because its controls favor right-side shooters, this would not be a pistol as suited to lefties.

This was CheaperThanDirt.com‘s price at the time of the test. Though it may not seem like it, it’s easy for a pistol to make a good first impression on us, and the Colt did just that. When checking sight regulation at the start of our firing phase, we shot the Colt Commander pistol off a bench rest at 15 yards. The rater fired three rounds to test the relationship between the sight picture and point of impact, then he walked to the target.

Result: Two rounds in the same hole and the other very close and directly on point of aim. That’s a good start.

The Colt Commander XSE is Colt’s top-end Commander. For a few hundred more dollars above the Remington R1 you get a full-length guide rod, Novak sights, forward cocking serrations, and nicely checkered custom-grade rosewood grips. The hammer was a lightweight skeletonized version which we often find on higher-end guns.

The Colt Commander’s ambidextrous safety can be used by both righties and lefties, or as an either/or tactical choice for users who might be injured and have to switch to opposite-handed firing. Trigger compression was clean with no creep or backlash at 6.0 pounds, one pound more than the Remington.

During disassembly, we noted the barrel bushing fit was tight, and the barrel locking lugs were well fitted. We saw little lateral play in-the-slide-to-frame fit. The slide-lock safety and the grip safety each exhibited positive function.

The Colt featured a cut out just under the trigger guard that slightly lowers the bore axis, resulting in a better fit for some shooters. During the combat-firing stage, the Colt handled better than the Remington, in our opinion, turning in marginally better combat groups.

Our Team Said: This was among the most accurate Commander pistols we have tested. After firing 250 rounds without a malfunction, we deem the Colt Commander XSE to be an excellent choice for personal defense. The goal of many shooters is to be able to defend themselves and their loved ones, and some training should follow this decision. But training is easier, more effective, and more fun with a tool like the Colt XSE. 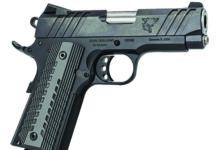 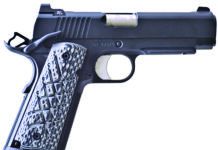 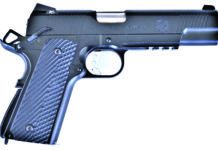