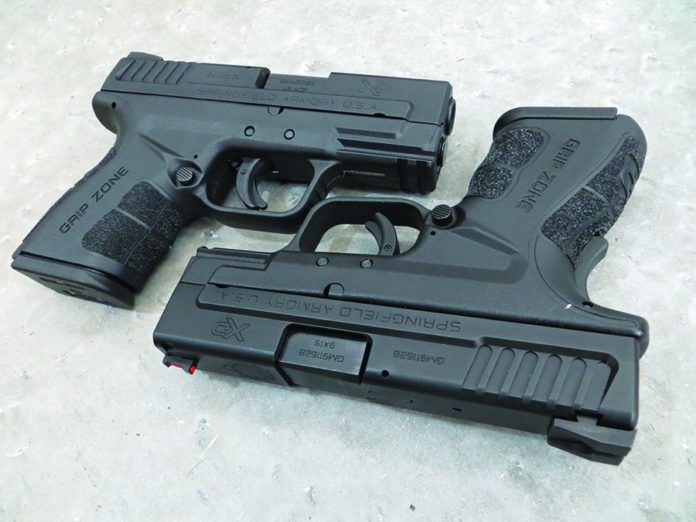 The compromise that shooters have to deal with in choosing a concealed-carry sidearm is this: A smaller pistol that is easier to conceal is usually more difficult to operate and shoot; and a larger pistol that is easier to operate and shoot is more difficult to conceal. A line of guns retailers have told us are popular carry pieces are the newest Springfield Armory XD variants, the XD Mod.2 series. They are supposedly redesigned XD subcompacts that have better ergonomics, more useful sights, and slimmer profiles. If you are looking for a concealed-carry handgun that offers a super-slim profile, less weight, and better concealability, we suggest you stick with a single-stack pistol like Springfield’s XD-S 3.3, which we reviewed in February 2015 (Grade A). On the other hand, if you want a pistol that is still concealed-carry friendly but has nearly double the magazine capacity with the feel of a full-size pistol, the Mod.2 pistols are supposed to fill that ticket. So we tested the two most-popular chamberings of the Mod.2 pistols in 9mm Luger and 45 ACP to see what all the fuss is about. The question that needed to be answered is, are these new guns so good that we would recommend you considering switching from your favorite carry piece? That is a super-high barrier for any handgun to scale, and, ultimately, each concealed-carrier has to make the decision to try them on his or her own.

The trend these days with law enforcement is to move to the 9mm cartridge, and many agencies we are acquainted with are using 147-grain ammo. So we selected 147-grain cartridges from Atlanta Arms as well as 115-grain rounds from Black Hills and Hornady. For the 45 ACP, we stuck with the most popular bullet-weight choice, 230 grains, selecting FMJs from Perfecta and Federal and hollowpoints from Atlanta Arms. We had no experience with Perfecta 45 ACP ammo, but found it at a big-box store and thought we’d try it.

We fired for accuracy at 25 yards using the provided flush-fit magazines and a rest. We also fired for speed at 15 yards with both magazines, and with the flush-fit magazines drew from concealed carry using the included belt holsters and a Fobus IWB holster that uses either a large or small universal shell. The flexible backing of the Fobus ensures the pistol stays secure when worn. We practiced dry-firing drills with both pistols using both holsters and progressed to live fire. By no means could these pistols be dropped in a pants pocket; they need a holster.

Mod.2 pistols are basically a contradiction: compact full-size XD pistols. But Springfield did more than just reduce the grip and barrel and slide length like they did with the XD 3-inch subcompact, which is another pistol we have given Buy It rating to in the past. With the Mod.2 series of pistols, Springfield addressed ergonomics in small pistols, which are usually difficult to shoot due to their small grips. Add in powerful rounds like 147-grain 9mms and 230-grain 45 ACP FMJs, and the shooter finds the pistols can easily move and shift in the grip, mainly because subcompacts do not have a lot of grip to hold onto in first place. We all know consistency is the key to better and more accurate shooting, and a good grip is the foundation of that concept. Springfield tackled this issue with the Grip Zone, or three different types of textures placed in strategic places. The three zones of texture provide different types of adhesion. Zone 1 texture is located on the frontstrap and backstrap and provides a good anti-slip surface. Zone 2 texture is the most aggressive and is located on the side panels. Zones 1 and 2 are a type of stippling that our team felt offers good adhesion without being uncomfortable to grip firmly. Zone 3 texture covers the remainder of the frame and has a slight pebble texture.

Both pistols come in a hard case with cut foam slots for all the pieces, which included a flush-fit and extended magazines, a belt holster, and belt double ammo pouch, the latter two being made of molded polymer. A polymer magazine loader is also included as well as a lock and bore brush.

Aft of the trigger on both sides the frame is a scalloped-out section so the trigger finger of a left- or right-handed shooter lays more comfortably in the ready position. The high beavertail safety and the rear of the trigger guard is relieved to provide a high hand hold on the pistols, making the bore axis closer to the shooter’s hand. Team members with small-to-average-size hands, as well as those with large hands, found the Mod.2 pistols comfortable to grip. In some instances, testers had to curl their small finger under the floorplate, while others had enough grip to stay on the lip of the flush-fit magazine floorplate.

The trigger guard is rounded off at the front on both models, which is how many testers feel all trigger guards should be. The pistols featured an accessory rail, which we felt was fine if the pistol is stored at home for defense with a small bright light or laser, if desired. The slide-stop and takedown levers were small, which made the pistols more holster friendly. The controls had good serrations and worked positively for all testers.

Sights are also an issue on subcompact handguns. Springfield equips the Mod.2 pistols with what felt were an excellent 3-dot sight system. The 2-dot rear sight is low profile and snag free as well as flush with the rear of the slide for maximum sight radius. The back portion of the sight is serrated to cut glare, which it did well during high-noon testing.

The red-fiber-optic front sight gathers light when it is available, making the front tube bright and easy to acquire. In low-light situations, we found the red-dot contrast was also easy to acquire. The front-sight blade is also serrated to reduce glare. The sights are dovetailed into the slide, so they are fairly simple to replace or upgrade, if you desire, but we would keep them as they came.

The ambidextrous magazine release is serrated and flush with the grip panels, so accidental magazine drops should not be an issue. When pressed, empty mags fell clear of the well. Even though these pistols come off as subcompacts, they feature capacities typically found on a full-size pistol. Flush-fit magazines hold 13+1 rounds of 9mm ammunition, while the 45 ACP variant holds 9+1 rounds. Each pistol also comes with an extended magazine that is equipped with a sleeve over the lower portion of the magazine. It fits seamlessly with the grip frame to give each pistol a full-size grip for flexibility. Also, the extended grip offers an additional four rounds in 45 ACP and three in 9mm. We found that slapping in the extended magazines took a bit of caution, as your small finger or palm of your hand can be pinched between the sleeve and the frame butt. With the extended magazine in place, the pistols felt like full-size models, and as we found out, were easier to control. For the bulk of our work, however, we focused on the flush-fit magazines because that’s how they’re likely to be carried.

The stainless magazines were easy to load, even to the last round, with those who used their thumbs and those who used the loaders. Witness holes let the user know what remained in the magazine. Floorplates were polymer, allowing for easy disassembly for maintenance.

Springfield also slimmed down the slides, making the Mod.2 pistols less blocky looking, and the company redesigned the rear cocking serration to be more pronounced for better grip. The team has encountered subcompact pistols that are difficult to operate since there is not a lot to grasp onto. We felt the slides of both Mod.2 pistols were easy to rack with a grasp over the slide-top method or the pinch-and-pull method. We also racked the slides by catching the rear sight on the edge of a hard surface (in case one arm is hurt), and that worked, too.

Both pistols also employed a dual-spring full-length guide rod to aid accuracy and help reduce recoil. Disassembly was easy. Remove the magazine, lock back the slide, then rotate the takedown lever clockwise to the 12 o’clock position. Control the slide as you release the slide stop, and the slide pulls off the frame. Reverse to reassemble.

The rest of the Mod.2 pistol is pure XD. Originally designed as a combat service pistol, the XD is a large, full-size pistol designed to be reliable and safe in any conditions. Like the XD, the Mod.2 is recoil operated and uses a striker-fired system. Featuring a polymer frame and steel slide, the Mod.2 has a cocking indicator, which is a pin that protrudes from the rear of the slide that can be felt or seen.

XDs are known for their excellent and safe USA (Ultra Safe Assurance) trigger system. The Mod.2 pistols tested had a bit of slack, then consistently broke with the feel of a SA trigger rather than the typical striker-fired trigger. Average pull weight was about 7 pounds, which we would want to lighten 2 or 3 pounds. The XDs and Mod.2s also have a drop safety and added grip safety.

The team was split even before we put in any trigger time, with the 45 ACP aficionados against the 9mm clan. But as range testing progressed, we found ourselves liking the 9mm more. At first, we expected the XD Mod.2 pistols would shift in our grip during recoil, but we found quite the opposite to be true. The grip textures offered good friction against our hands without abrasion.

We also saw the sights were large and offered fast target acquisition. The pistols likewise pointed well for close work and continued to perform out to 25 yards. Most felt the pistols acted like full-size pistols.

Recoil felt less stout in the Mod.2s compared to other smaller pistols we are familiar with. We attribute this to the grip, lighter slide, and dual-spring recoil guide rod. There was some take up on the triggers — which is fine considering these are defensive pistols — as long as the breaks were consistent, which they were.

The 9mm and 45 ACP Mod.2 pistols performed like full-size pistols, and we did not feel we were giving up control for better concealability. The additional ammo capacity was a plus. Accuracy was good due to the trigger and sights. If it were our money, we preferred the 9mm model, which offered a good combination of ammo capacity, size, weight, and better control.