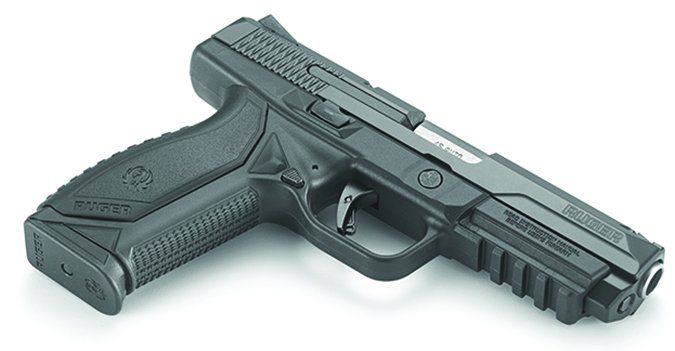 Sturm, Ruger & Co., Inc. has announced a new line of full-size duty pistols, new chamberings for its GP100 revolvers, new barrels for its 10/22 Takedowns, and new colors for its Lite rimfire pistols. Also, the company has added a Takedown rifle to its SR-556 line.

“The Ruger American Pistol is the most advanced semi-auto pistol we have ever produced,” noted Ruger CEO Mike Fifer.

CEO Fifer said that Ruger polled law enforcement and military trainers throughout the country to determine the form, function, and features of this firearm. The new pistol combines a recoil-reducing barrel cam to spread recoil over time, a low-mass slide, low center of gravity and a low bore axis to provide better balance, less felt recoil and less muzzle flip.

The Ruger 22/45 Lite is now available with an OD-green anodized receiver with a new side-vent pattern. Made of an aerospace-grade aluminum upper and a polymer lower, the 22/45 Lite features a 4.4-inch-long barrel with a 1⁄2-28 threaded muzzle covered by a factory-installed thread protector. No. 3912 has an MSRP of $549, joining the 3908 Blue Anodized version, which we positively reviewed (Grade: A) in the May 2015 issue. Other than the color, the specs are the same for the new 3912 version.

The GP100 in 22 LR features a windage-and-elevation-adjustable rear sight with a white outline, a light-gathering fiber-optic front sight, and the original full-size GP100 rubber grips with hardwood inserts. The stainless-steel construction should make this GP100 an easy firearm to maintain.

This newest entry into the 10/22 Takedown line has a target barrel with a 0.920-inch-diameter 16.10-inch cold-hammer-forged barrel. This new target barrel takedown model also incorporates the Ruger Modular Stock System and comes with both low and high comb, standard length of pull modules.

The Ruger 10/22 Takedown with target barrel is shipped with a carrying case with extra pockets and magazine pouches. The 5.5-pound Ruger 10/22 Takedown is 34.50 inches long when assembled; each subassembly is less than 20.25 inches long when disassembled. It otherwise functions like the standard 10/22 action and comes with one 10-round rotary magazine.

Ruger’s SR-556 AR is now available in a Takedown Model, No. 5901, $2049 suggested retail. The takedown barrel is removed from the upper receiver by moving the slider bar towards the breech, rotating the barrel and pulling it free — no tools are required. To install, just slide the barrel into the upper and twist until it locks. The takedown mechanism provides a repeatable point of impact and employs a chrome-plated, two-stage piston-driven operating, the company says.

“We are excited to bring the portability and ease of storage that we introduced with the 10/22 Takedown to a modern sporting rifle” said Mike Fifer, CEO. “The SR-556 Takedown has all the reliability of the original two-stage piston SR-556 and adds new and innovative features for MSR shooters.”

The removable 16.1-inch chrome-lined cold hammer-forged Mil-Spec 41V45 chrome-moly-vanadium steel barrel is chambered in 5.56 NATO. The headspace is set at the factory, so no adjustment is necessary. The barrel assembly includes an elevation and windage adjustable flip-up front sight so that the zero stays with the barrel. The SR-556 Takedown also sports the shorter Ruger flash hider on the -28 threaded muzzle.

AR shooters who desire a larger cartridge can find a replaceable barrel kit for the Takedown chambered in 300 AAC Blackout. The cold hammer-forged 300 AAC Blackout barrel is 16.1 inches long, has a 1:7 twist, and is capped by a 5⁄8-24 threaded muzzle fitted with a Ruger flash hider. This range-ready barrel’s headspace is set at the factory and comes complete with a metal flip-up elevation- and windage-adjustable front sight and two 30-round metal magazines marked with “300 AAC BLACKOUT” to ensure easy differentiation.

Other elements of the SR-556 Takedown include a quad-rail handguard. The slider bar for removing the barrel is located on the bottom rail under the gas block and is out of the way of accessories. The upper receiver is complete with dust cover, forward assist, and metal flip-up windage adjustable rear sight. All aluminum parts are hardcoat anodized. The Ruger Elite 452 two-stage trigger is installed in the standard mil-spec pattern lower receiver. Furniture on the 7.6-pound SR-556 Takedown are a Magpul MOE grip and MOE SL stock on a mil-spec buffer tube.

Three 30-round Magpul PMAG magazines and three full-length rail covers ship with the SR-556 Takedown in a ballistic nylon case.

Gun Tests would like to advise our readers that Winchester Repeating Arms has recalled its XPR rifles because manipulation of the safety switch may cause movement in the trigger system that could result in unintended firing. The company advises its customers not to load or shoot any XPR rifle until it has been returned to the company’s service center and received a retrofit.

A company statement said, “Failure to follow this warning may result in a risk of harm, including serious personal injury or death to you and others.” Further, the company said, “We have decided to replace certain trigger group parts at no charge. This will require that all XPR rifles are sent to our service facility for a retrofit. We respectfully require all owners to return their rifles for the retrofit.”

For more details on how to return your rifle for retrofitting, or if you are unsure if your rifle is included in the recall, or if you have any questions about this recall notice, call or e-mail the company with the contact information below:

You can also log on to WinchesterGuns.com to get further information on the recall.

Magnum Research has introduced another set of Desert Eagle Mark XIX animal prints and two new models of its stainless-steel Desert Eagle, these chambered in 357 Magnum and 44 Magnum.

The new animal-print patterns are Kryptek Typhon and the Zebra, and both are available in either 50 AE or 44 Magnum chamberings. MSRP for both Desert Eagles is $1793.

Regarding the animal-print series, “The Cheetah, Kryptek Highlander, and Snakeskin Desert Eagles sold very rapidly,” said Frank Harris, VP of sales and marketing for Magnum Research. “When you take one of the largest, most powerful handguns in the world and marry it to a unique animal print, shooters take notice.”

Like the other designs, the Kryptek Typhon and the Zebra patterns are put on with a water-transfer method. Harris said the patterns have been extensively tested for durability and have proven to be very tough. He said cleaning solvents and acetone will not soften or damage the finishes.

Common measurements include a trigger reach of 2.75 inches and a sight radius of 8.5 inches with the 6-inch barrel. Both handguns include Weaver-style accessory rails for easy mounting of aftermarket optics and scope rings.

The new Mark XIX Desert Eagle 357 Magnum (DE357SRMB) and 44 Magnum (DE44SRMB) have all-stainless-steel frames, slides, barrels, and rails accented with attractive black appointments. Both models have 6-inch barrels and integral muzzle brakes, which will replace the add-on brakes Magnum Research previously offered. Both list for $1,931 and are scheduled to ship during first quarter of 2016.

Handily, the integral muzzle brake makes the new models the same overall length as the company’s standard 6-inch-barrel handgun, so the same holsters will fit the new models. The DE357SRMB and DE44SRMB also feature new Picatinny bottom rails for accessories.

Two Pistols That Will Be ‘Out of This World’

Cabot Guns of Fort Wayne, Indiana, plans to offer a two-item set of pistols that are made from a 4.5 billion-year-old meteorite. The twin right- and left-handed 1911-style semi-automatic 45s have tentatively been called The Big Bang Pistol Set.

“It’s both romantic and fascinating to imagine that this meteor traveled across the heavens for four billion years before landing on Earth and is now being transformed into Cabot pistols,” said Cabot founder and President Rob Bianchin. “The pistol set will be a modern work of functional art and the ultimate set of luxury guns.”

To manufacture the pistol set, earlier this year Cabot acquired a 35-kg portion of the prized Gibeon meteor from famed meteor hunter and expert Robert Haag. The meteor, dated to an age of 4.5 billion years, was first discovered in the sub-Saharan part of Africa now known as Namibia in 1838. It is believed to have landed on Earth during pre-historic times. Meteorite materials aren’t optimum for making firearms, so numerous technical problems have to be overcome. The Big Bang Pistol Set will debut during the NRA Annual Meeting in May.