In the sport of Practical Shooting, the competitor who lands the best hits on target in the least amount of time wins. To this end competitors have found ways to wring out the most performance possible from their equipment, and many of the modifications first seen at practical matches have found their way into the design of modern production pistols. Features such as high-visibility sights, oversized control levers, and lightweight action parts are some of the innovations that were developed by competitors hungry for the winners circle.

Within the Glock lineup of Safe-Action polymer pistols, the model that incorporates most of what a Practical Shooting competitor needs is the 9mm G34. The G34 pistol offers such advantages to the competitive shooter as a long sight radius, an adjustable rear sight, enlarged magazine release for faster reloads, and a light factory-tuned trigger. In the hands of Glock Team shooter Dave Sevigny, the G34 and its .40-caliber sister, the G35, were the winning pistols in both the 2005 USPSA Production and the Limited 10 division National Championship matches respectively (www.uspsa.org).

But next year, rival manufacturer Springfield Armory hopes the results will be different. By stretching its 4-inch-barreled XD polymer service pistol to house a 5-inch barrel, the new XD9401 Tactical model could pose a threat to Glock’s stranglehold on the competition. An added benefit for the defense minded is that the additional barrel length of these guns maximizes the velocity, and therefore the power, of 9mm ammunition. Also, the Springfield Armory pistol sells for substantially less than the G34, and we wondered if the new XD9401 was ready to take on the Glock.

To test each gun, we performed rapid-fire drills, and, separately, we recorded five-shot groups shot from a distance of 25 yards. Our choice of ammunition included the popular 115-grain full-metal-jacketed round from Winchester USA and one other budget round available at Wal-mart in boxes of 100 for less than $10, Remington’s 115-grain jacketed hollowpoints. Our third test round was premium ammunition from Speer in the form of 124-grain Gold Dot Hollowpoints (GDHP). Confident our battery of tests would tell if the reigning champ was in for a tough fight with the new XD Tactical pistol, we headed to the range.

According to the manufacturer, the Glock pistol was the first “industrially manufactured handgun with high-tech polymer grips.” The barrels and slides are coated with what Glock describes as a “high-tech surface refinement” that they call Tenifer. The benefits of this “carbonitriding” coating are not only corrosion resistance and reduced glare but also resistance to abrasion. Tenifer coating is highly rated on the Rockwell Cone hardness scale at 64 HRC.

Some Glock pistols are available with different color frames, but our G34 was basic black. The defining feature of the G34 was its long 5.3-inch barrel with polygonal rifling, covered by a slide that included a gaping hole just to the rear of the front sight. This relief measured approximately 1.75 inches long by 0.75 inches wide. Glock says that this serves to reduce stress on the frame. The dustcover beneath the slide was also longer, making room for a healthy sized accessory rail, which was molded into place. The schematic breakdown of the Glock pistol with magazine lists only 34 separate parts, 36 if you count the magazine insert at the base plate (part 32a), and the front sight blade, part number 16a.

The rear sight unit was adjustable for windage and elevation but still managed to maintain a low profile, making it less vulnerable to damage by snagging, impact, or even a tight-fitting retention strap. Adjustment was by two screws. A tiny screwdriver that proved too easy to misplace was included. Other supplied parts that we didn’t lose were a cleaning rod, a bore brush, owner’s manual, two fired cases, a magazine loader and a cable lock. The two supplied magazines held 16 rounds each.

Our G34 came with a factory-tuned trigger. Actually, producing a light trigger on the Glock system does not necessarily require elaborate parts or machining. The design of the connector is the primary point of control, and all G34 pistols are fit with a 3.5-pound connector as standard equipment. The result was a measured trigger-pull weight of about 6 pounds. At the range, we did not find the trigger to be dangerously sensitive, but it did help us land impressive groups from the very first shot.

Without any warm-up or practice, our first group firing budget ammunition measured less than 2 inches across. After a few groups, we had to remark that the G34 was one of the easiest pistols to shoot accurately, even at 25 yards. The longer sight radius helped us focus on the front sight and steer it into place as each shot broke. The G34 offered smoothly modulated recoil, making it easy for the shooter to follow through on each shot.

Our best groups with both the Glock and the Springfield Armory pistol were achieved with the Remington 115-grain JHP rounds. We landed more than one five-shot group that measured less than 1.5 inches across with the G34, for a final average of only 1.6 inches. The Speer GDHP rounds were in second place, but they produced the most power in both of our test guns. The Speer ammunition registered muzzle energy in excess of 400 foot-pounds, proving that longer-barreled guns maximize the power of a given round. We found that the Winchester ammunition performed the same in both guns, producing an average group measuring 2.3 inches for a virtual tie. Perhaps it was merely an indication of a happy range session with many rounds well spent, but even with the 6-pound trigger we managed to wear out our trigger fingers.

The Glock trigger was easy to manipulate, but it asks the shooter to work different muscles than a single-action pistol or even a revolver. The trigger press felt somewhat isometric, but unlike a number of striker-fired pistols we’ve tested, the shooter never had the feeling of an endless struggle devoid of feedback. Overall, the G34 was a well-balanced package expertly tuned for 9mm ammunition.

Our initial encounter with this design was a test of the Intrac HS2000US pistol in our April 2001 issue. In May of the following year we tested the Springfield Armory XD pistol and recognized it as being the very same pistol as the Intrac. Since joining with the Croatian manufacturer that first imported the HS 2000, Springfield Armory has concentrated on tuning this striker-fired polymer pistol for the American market. The XD pistols are currently available chambered for 9mm, .357 Sig, .40 S&W, and .45 GAP ammunition. Three overall sizes described as Subcompact, Service and Tactical are available.

Our XD9401 Tactical came with a 5-inch barrel, which we think will encourage more competitors to take another look at the XD pistol for competition, and here are the reasons why. To begin with, the cost of the basic pistol is low. Most retailers sell the XD pistols for less than $500, but even the suggested retail price of this model was reasonable, in our opinion. Furthermore, the XD design offered what a lot of shooters want but don’t normally find in a polymer pistol.

To begin, the XD’s grip fits comfortably in a variety of hands. Also, everyone liked the grip safety and welcomed the additional safety features, such as the two separate indicators. When the chamber is loaded, a lever tilts up from atop the slide just to the rear of the barrel hood, and a pin connected to the striker protrudes from the back of the slide when the gun is cocked.

Next, the magazine release was ambidextrous and could be operated quickly from either side. The magazines were handsome and durable and were constructed of polished stainless steel. The sights were dovetailed into place, making replacement simple. Perhaps most important to shooters, the feel of the trigger was much closer to that of a single-action 1911 than a double-action pistol. Whereas both the Glock and XD pistols start with the striker partially ready to move forward, the XD system leaves just the very last bit of rearward movement to the trigger press. The result is a trigger with a brief take-up followed by a short final press to ignition. Add to this the longer sight radius and additional recoil-smothering weight of the Tactical model, and the potential for a winning pistol is obvious.

Apart from trigger feel and ergonomics, one glaring difference between the Glock G34 and the Springfield Armory XD9401 Tactical is price. In our opinion the difference of $229 is largely because the G34 is a factory custom unit compared to the other pistols in the Glock lineup. On the other hand, the XD9401 appears to be separated from other XD models solely by the added length of its barrel and slide.

The Service model 9mm XD with 4-inch barrel offers a sight radius of 5.8 inches and weighed in at 28 ounces. Our Tactical model with 5-inch barrel weighed 30 ounces with a 6.9-inch sight radius. Trigger-pull weight on both guns was 8 pounds. The same sights were applied to each pistol, as was the finish (a stainless-steel slide is available).

In terms of accuracy, we can look all the way back to our test of the original 4-inch-barrel HS2000 and compare results with the Remington 115-grain JHP ammunition. The pre-Springfield Armory pistol produced 3.1-inch groups on average, and the new 5-inch Tactical model landed five-shot groups that averaged 2.1 inches from 25 yards.

The second-best performance by the Tactical model was an average of 2.3 inches with the Winchester ammunition. The Speer GDHP ammunition averaged 2.5 inches, but produced the highest muzzle energy in the test, 410 foot-pounds. Neither of the guns suffered a malfunction of any kind, and our only complaint was that the XD pistol tended to land its shots about 4 inches higher than point of aim when fired from a sandbag rest at 25 yards. Even at closer distances the difference in elevation was enough to spoil our fun.

This POA/POI difference alone means that a change of sights was in order, but we think more should be done. The rear sight, a fixed unit adjustable for windage only via drift or physically moving the sight from side to side, was mounted about 0.4 inches from the rear of the slide. Adding an adjustable rear sight that placed the rear notch even with the end of the slide would maximize sight radius. We would also prefer a thinner front sight blade, and we feel that the result would enhance accuracy.

The XD pistols have yet to reap the full benefit from the innovation of enthusiastic competitors, but improved action parts and match barrels are beginning to make their way into the marketplace. In fact, upgrade packages of parts and services that include better sights, precise barrel refit, custom grip contouring, and extended beavertails are available directly from Springfield Armory’s Custom Shop. Reliable triggers with pull weights as low as 3.5 pounds are possible with the XD action. It would seem to us that a properly prepared XD9401 Tactical would be stiff competition for the Glock G34.

• Glock G34 9mm, $770. Our Pick. Even if Glock never intended the G34 to be a competition pistol, it fits perfectly into the Practical Shooting scene. The long barrel maximizes the power of 9mm ammunition, and the surrounding platform delivers precision and shooting ease. The G34 is arguably Glock’s best pistol to date, and it is a great gun for shooting the 9mm cartridge. No wonder so many shooters like it. 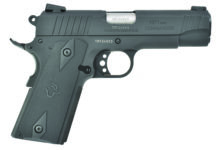 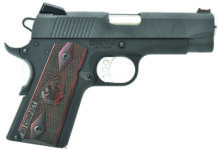