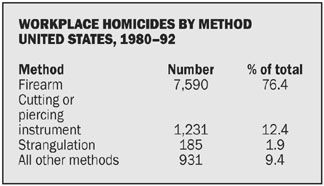 Professions with a High Risk of Being Killed

Our story on high-retention duty holsters later in this issue brought up the topic of how dangerous law-enforcement jobs are compared to other careers. How to prevent a law-enforcement sidearm from being used on its owner is always a worry, mainly because the policing environment, by definition, is filled with bad guys. But, we wondered, what about other jobs in which the civilian worker may not be legally armed, or, worse yet, may be prevented by workplace rules from protecting himself?

Workplace disarmament, and the resulting injuries and deaths such policies cause, are a bigger problem than you might think. For instance, banning guns from the workplace is the policy at many companies, including the nations largest oil refiner, which bans employees from storing locked guns in their cars while parked in company parking lots.

It turns out that if youre a taxicab driver or chauffeur, a sheriff or bailiff, a member of a police force, work at a gas station or garage, or patrol as a hired security guard, then you have a job that puts you at the most risk of being killed, according to a National Institute for Occupational Safety and Health (NIOSH) study.

Each week in the United States, an average of 20 workers are murdered and 18,000 are assaulted while at work. These staggering figures should not be an accepted cost of doing business in our society-nor should death or injury be an inevitable result of ones chosen occupation, says Linda Rosenstock, director, National Institute for Occupational Safety and Health Centers for Disease Control and Prevention.

Data from the National Traumatic Occupational Fatalities (NTOF) Surveillance System indicate that 9,937 workplace homicides occurred during the 13-year period from 1980 through 1992, with an average workplace homicide rate of 0.70/100,000 workers.

Between 1980 and 1992, 76 percent of work-related homicides were committed with firearms, and another 12 percent resulted from wounds inflicted by cutting or piercing instruments. The largest number of deaths occurred in grocery stores, eating and drinking places, taxicab services, and justice/public order establishments.

When detailed occupations were analyzed for 1990-92, the highest homicide rates were found for taxicab drivers/chauffeurs, sheriffs/bailiffs, police and detectives-public service, gas station/garage workers, and security guards.

Moreover, according to Bureau of Labor Statistics (BLS) data, workplace homicides are rarely worker-killing-worker situations. Instead, according to data collected in 1992-94, a BLS analysis showed that 73 percent to 82 percent of the homicides occurred during a robbery or other crime, whereas only 9 percent to 10 percent were attributed to business disputes, and only 4 percent to 6 percent were attributed specifically to coworkers or former employees.

Our Take: Looking at the NIOSH numbers, it is easy to notice that two of the top five most dangerous categories were not in law-enforcement, where workers were likely armed, with one additional category, security guards, sometimes being armed, depending on local regulations.

The NIOSH research clearly shows that some risky jobs (policing) are likely to stay risky regardless of what measures are taken to minimize the chances of assaults or homicides. But the NIOSH recommendations for reducing risk to non-law-enforcement jobs (cabbies and convenience store clerks, to name two) seem to overlook an obvious strategy: concealed carry.

NIOSH job-safety recommendations include having good visibility within and outside the workplace, cashhandling policies, physical separation of workers from customers or clients, good lighting, security devices, escort services, and employee training. Thats all fine and good.

But what about workplace regulations that prevent employers from disarming employees?

Oklahoma has the right idea: About 2 1/2 years ago, 12 employees at a Weyerhauser plant in Oklahoma were fired because that companys ban on guns was extended to the parking lot. The company used trained dogs to find guns in employees vehicles. Thereafter, Oklahomas legislature overwhelmingly passed a law letting employees keep locked guns in their cars.

The data from states that have concealed carry laws for their citizens clearly show downward trends in crime when compared against states that dont. Obviously, arming the good guys helps control crime.

Doesnt that data also suggest that arming the cabbie or convenience store clerk gives them a fighting chance to protect themselves in high-risk situations? We think so.

Across the country, were going to make ConocoPhillips the example of what happens when a corporation takes away your Second Amendment rights, LaPierre said. If you are a corporation thats anti-gun, anti-gun owner, or anti-Second Amendment, we will spare no effort or expense to work against you, to protect the rights of your law-abiding employees. Their rights are worth more than your money!

LaPierre spoke at a rally to support Idabel employees fired by Weyerhaeuser because they kept legally owned firearms safely stored in their locked vehicles in a public access company parking lot. Since the firings, the Oklahoma Legislature passed a bill to prevent such terminations, but ConocoPhillips filed a federal lawsuit to block the protective measure.

ConocoPhillips went to federal court to attack your freedom, LaPierre said. Now freedom is going to fire back! At the rally, LaPierre unveiled a new billboard advertising campaign to target Conoco and Phillips 66 gas stations. The billboard reads, ConocoPhillips is No Friend of the Second Amendment.

Our Take: You cant say you support Second Amendment freedoms, then turn around and support anti-Second Amendment companies. Until ConocoPhillips supports the freedom of law-abiding Americans, well buy our gas elsewhere.

• AB 352 expands the definition of unsafe handguns to include semi-automatic pistols that are not designed and equipped with an array of microscopic characters which identify the make, model, and serial number of the pistol by imprinting the characters on each cartridge case when the firearm is discharged.

• Assembly Bill 996 would require all retailers to display and sell ammunition in a manner that is only accessible by an employee, not the purchaser.

Our Take: AB 352 could essentially ban all semi-automatic pistols. AB 996 would make selling guns much harder, and we hope California gun owners oppose them, for all the good that will do.

Forbes.com readers, editors and a panel of experts have ranked the rifle as the 7th most important tool of all time, in terms of its impact on human civilization.

In an August 2005 Forbes.com counted down the 20 most important tools of all time. These tools were defined as a material device that provides an advantage in accomplishing a task. That eliminated things like language and software. The Forbes editors eventually came up with a list of more than 100 candidate tools.

In July, they polled Forbes.com readers, senior editors, and a panel of experts for their choice of the top tools.

Explaining the rifles ranking at seventh, the Forbes online report said, For as long as humans have created tools, theyve made projectile weapons. Our ancestors made spears, slings and bows and mastered their use in hunting and warfare. But the rifle put all those tools to shame, boasting unprecedented accuracy, power, reliability, and range. Rifles have won wars, tamed continents and overturned empires.

In addition, Remington also will continue to offer Premier Hevi-Shot Turkey loads for the upcoming 2006 season.

Our Take: Its a shame this partnership is breaking up, because the Hevi-Shot product was effective, in our experience.

The 2004 presidential election showed that anti-gun candidates like John Kerry arent above repositioning themselves as gun supporters to try to get more votes. Apparently, a Virginia politician is trying the same thing.

Tim Kaine, the Democrat candidate for governor, has rolled out a Sportsmen for Kaine program to try to garner the states sizable hunting vote. But NRA Chief Lobbyist Chris W. Cox has issued a statement saying Kaine has a strong anti-gun record.

Cox said, [This] is just another attempt by Tim Kaine to hide his true gun control record. But this smoke-and-mirrors campaign isnt going to fool Virginias gun owners and sportsmen. Kaines record and rhetoric dont match.

Cox goes on to recount several of Kaines anti-gun efforts, including Kaines support of shutting down gun shows; Kaines advocacy of suing gun manufacturers; and his earning the backing of Sarah Bradys gun ban group during Kaines run for lieutenant governor in 2001.

Our Take: Anyone who supports shutting down gun shows and suing the gun industry out of existence is no friend of sportsmen. Kaines opponent, Jerry Kilgore, has a much stronger 2nd Amendment record.

Sentry Group, a manufacturer of light-commercial fire-resistant and security storage containers, has begun building its gun safes at its plant in Rochester, New York. First manufactured in Shanghai, China, many of the gun safes will now be manufactured in the companys 30,000-square-foot domestic plant.

Jim Brush, president and CEO of Sentry Group, said, With the growing cost of steel and increasing freight expense to ship tons of product from China, it just made sense for us to re-evaluate our approach to the gun safe business. By producing these gun safes domestically, we will be able to keep costs down.

For more information about products and availability, go online to <www.sentrysafe.com>.

Our Take: Its nice to see manufacturing jobs return to the U.S. from China.

British Home Secretary Charles Clarke has given special permission for pistol events to be staged at the London 2012 Olympics. But British team members face having to do all their 2012 preparations abroad, the BBC reports.

It would be fantastic if they were given the ability to compete on a level playing field, said British shootings performance chief John Leighton-Dyson.Laws banning most types of handguns were introduced after gun enthusiast Thomas Hamilton killed 16 schoolchildren and their teacher at Dunblane Primary School in March 1996. As a result, British shooters who compete in the rapid fire, 50m pistol men and 25m pistol women Olympic events can only train in Northern Ireland, the Channel Islands or Isle of Man.

Team members currently spend about 20 to 30 days a year training in Switzerland, and receive no funding because their events are illegal in the UK.

The Home Office agreed to relax the law so the three events can be staged in 2012, as it did for the 2002 Commonwealth Games events, although stringent security measures will still be required.

But the governments current stance is that there will be no further concessions for training in the build-up to the Games.

Our Take: Japan, which has similar gun laws to Britain, gives its elite pistol shooters a special exemption. But Britains gun-law climate is insane, so its shooters wont be allowed to train and prepare on the same level as other athletes. They will have no reasonable chance of competing effectively.