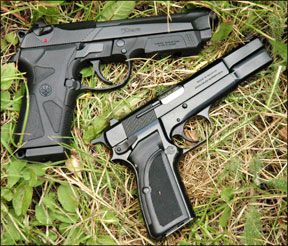 In our ongoing examination of todays 9mm handguns, we now take a look at two full-size autos. These are a recent entry from Beretta, the 90-Two, and one of the all-time classics, the Browning Hi-Power. While the latter is SA only and the other DA, both are big handguns, and the prospective gun buyer looking for a full-size nine might well want to consider comparing these two.

Before we tried this handgun we changed its rather large grip for a slimmer one provided by Beretta ($21.50), following the excellent instructions in the owners manual. This reduced the largest grip circumference by about a quarter inch, which was significant and added greatly to the comfort of this large handgun. The magazine release could also be reversed. To call this a large handgun is an understatement. It was fully as large as a 1911, with more bulk above the hand as seen from the rear. Fully loaded it weighed nearly as much as a fully loaded 1911 (1.16 kg versus 1.19; 18 rounds versus 9.). The light rail in front of the trigger guard had a plastic cover that increased the bulky look. The grip angle was a good deal sharper than a 1911. Some would complain this gun points too low, but we didnt find that to be a problem. Two 17-round magazines came with the gun in its padded hard case. Also in the case was the instruction manual and the one-year warranty statement.

There are three versions of the 90-Two: Types F, G, and D. Ours was the Type F, which had a safety lever that dropped the hammer and remained locked. The Type Gs safety would drop the hammer and return to firing position. The Type D is double-action for every shot. In addition to the safety the guns controls included a large, easily used slide release, and in front of that a takedown lever. We thought the plastic cover over the Picatinny rail would not only protect the rail from damage, but might also make presentation and reholstering a bit slicker.

The 90-Two had the typical Beretta open-top slide. The slide was steel, with a well-done Parkerized-looking matte finish called Bruniton. The grip frame was aluminum, and the trigger and grip were polymer. The entire gun was flat black in appearance, with no glossy surfaces anywhere. The barrel was chrome lined. The sights were dovetailed in, and could be drifted for windage as needed. The gun shot slightly left and low, but we left the sights alone. The sight picture was excellent, with the shooter seeing three white dots.

Optional extras listed by Beretta (www.beretta90two.com) include a “tactical” light for the rail, a bunch of different holsters for various applications, and of course the extra-cost slimmer grip unit. Some of us thought the grips could have been stickier. Both the thin replacement grip and the original grip had molded-in checkering that didnt quite cut it for our shooters. However, everyone agreed the gun was very comfortable to shoot.

Takedown could hardly be easier. Clear the gun, and then press on the button on the right side, just above the front of the trigger guard. Hold it in, rotate the takedown lever 90 degrees, and off comes the slide. Take out the recoil spring, let the barrel lock come down and then pull the barrel down and to the rear. Reassembly is just as easy. Basically, put the barrel and spring back together into the slide, make sure the barrel is fully up, fit the slide onto the frame and pull it slightly rearward. The takedown lever springs back into position. There are no excuses for not keeping your Beretta clean.

On the range we found the 90-Two had excellent accuracy with Fiocchi ammo. Our best group had four into half an inch at 15 yards, with all five going into an inch. Accuracy with the other two types was not quite so good, but on average we got about 2- to 2.5-inch groups. We did note the first-shot syndrome common to some autoloading pistols. The first shot would go one place, and the rest somewhere else. This tended to make the Berettas accuracy look a bit worse than it was. The best news is that this was an extremely comfortable gun to shoot. Even long strings of the hottest loads didnt bother our shooters. And thats about the only benefit of a 9mm this big and heavy.

Our Team Said: In rapid fire, the Beretta was slower for the first shot than the Browning, but not a lot, because of the poor trigger on the Hi-Power. Double taps single-action for both shots gave excellent and fast hits. We liked this gun a lot more than we thought we would. Anyone who wants or needs a big nine really should give the 90-Two a good, hard look. Yet we believe it could be improved even more. Tactically, its obsolete. We dont much like DA/SA shooting, even though the 90-Two had a reasonable DA pull. We could manipulate the ambidextrous safety with our hand in the firing position, but didnt really like it. A better setup, we believe, would be to make it like the CZ, which can either be carried cocked and locked, or fired DA/SA as desired. A safety lever that drops the hammer is an archaic idea that doesnt play well with a lot of folks, some of us included. Finally, do you really need a huge 9mm that holds 18 shots? If you plan to miss a lot, and like to make a lot of noise, you may need one of these. For others who realize the limitations of the caliber, a 9mm about the size of the Kahr P9 or even the PM9 is plenty big enough.

This version of the Hi-Power was made in Belgium and assembled in Portugal. The well-done matte-black finish is actually epoxy, not the glorious bluing that used to grace these classic guns. But wait, you can still get a blued Hi-Power in the Standard version, for $999. And theres also a “digital green” camo version that you dont want to drop in the forest, because you might have a hard time finding it. The versions other than our test model all have slightly higher prices, up to $1069 for the ones with bluing and adjustable sights. Options include 10-round or, like ours, 13-round magazines. Overall workmanship was very good to excellent everywhere we looked.

This version came with plastic grips with finger recesses and an ambidextrous safety. Other than the grips all the parts we looked at were steel. The Browning had a long hammer that should have been easy to cock, but it took a lot of thumb force to cock it. That was our first tip-off to expect a poor trigger, and we were not disappointed. The Hi-Powers trigger was very heavy at 10 pounds. The Berettas DA pull was only 11. For a company of Brownings stature to issue such a trigger on a thousand-dollar handgun is a travesty, we believe. The Berettas SA trigger was about 6 pounds which-although steep-was a dream compared to that of the Browning.

We also did not like the sight “dots,” which were white rectangles that extended to the tops of the rear and front sights. These made the edges tend to disappear for us, which made holding elevation difficult. Also, the glare of the top of the slide reflected the front white bar prominently, and in a hurry that could give too much front sight. Simple dots would be better, we thought.

The ambi safety worked well enough but it interfered with the knuckles of some of our shooters. The levers were barely large enough to be operated in either direction. We thought they could have been longer, and they stuck out too far at the rear. We expected to be cut by the overlapping hammer, but that did not happen. We tested a Charles Daly clone of the Hi-Power, called the HP, in July 2008. It had a Commander-style hammer that did in fact bite us on occasion. Comparing the now-discontinued Daly to the Browning revealed slightly different contours to the hammer lines where they met the rear of the frame. There were other changes, too. Bear in mind the Daly was recently available for around $350, though we expect theyve disappeared at that price.

The Brownings magazines dropped free from the gun thanks to a protruding spring at the bottom rear of the magazines. The Browning magazines interchanged with the Daly magazines, which did not drop free from either gun because they lacked that extra spring. We didnt care for the plastic grips on the Hi-Power either. Our hands got gouged by the upper-rear contour of the grip on both sides, which protrude and then drop off sharply inward. In long shooting sessions this was a real pain. We did not have the same trouble with the Daly version, nor did its safety interfere with our shooting hand.

As we concluded in our previous test of the Daly HP, we feel the classic Browning Hi-Power desperately needs an upgrade to a more modern and better tactical package. The gun wont fire with the magazine removed, and while some shooters like that, most dont. The magazine was difficult to insert because there was no beveling done to the magazine well, and the mags caught on the bottom of the front strap. The Browning did have a safety on its firing pin that prevented it from flying all the way forward unless the trigger was pressed. However, all the springs in the Browning seemed to be about twice as heavy as needed, including the firing-pin spring. Theres even another spring for the firing-pin lock, just one more obstacle for the trigger finger to overcome. All in all, we didnt much like the Hi-Power, and we had yet to shoot it.

Taking the gun apart was not bad, and a big improvement over the 1911. Inside we found good workmanship and finish, but nothing special, except for the extra spring as noted. On the range, we found accuracy with American Eagle and Black Hills ball was slightly worse than we got from the Beretta. With Fiocchi the Hi-Power was lousy. We got one 4.4-inch group at 15 yards. The best group was 1.4. Maybe the Hi-Power would shoot better with more rounds through it. It seemed to have a tendency to do this, but we ran out of time and ammo before we could prove it. We never got bit by the Hi-Power but had an awful fight with its trigger, sights, and grips.

Our Team Said: We didnt like the ergonomics, tactical limitations, sights, accuracy, trigger, nor price. We received a suggestion from a reader that makes sense to some of us. That suggestion was that Browning continue to offer the classic blued Hi-Power for those stricken with nostalgia, and then improve the other versions to more modern standards with features such as elimination of the mag disconnect, a trigger in the realm of 4-not 10-pounds; beveled magazine well, better grips, slimmer rear ends on the ambi safety, longer safety levers, an extended tang to prevent hammer bite, checkering on the front and rear straps, and the option of tritium sights, to name a few items. The only thing Browning has done right with this gun over the years is to offer it in a slightly more serious caliber. Most of us would pass on it.