The 32 S&W cartridge dates back to the late 1870s, and the 32 S&W Long is slightly newer. It was introduced in the late 1890s. This round took the same route as the 38- and 44-caliber cartridges. Shooters wanted more power, so the cartridge case was lengthened to add more powder. In 1984, Harrington & Richardson (H&R) partnered with Federal and lengthened the 32 S&W Long case and called it the 32 H&R Magnum. This cartridge offers low recoil with energy levels similar to a 38 Special. The advantage of 32 H&R Magnum over the 38 Special was the former holds six shots compared to the latter, which holds five shots in the same size revolver. The 32 H&R Magnum nearly succumbed and became a mere footnote in Cartridges Of The World. In 2008, Federal increased the case length again and introduced the 327 Federal Magnum which was intended to provide similar ballistics as the 357 Magnum; again the advantage is more round capacity with the 32 Federal Magnum compared to the 357 Magnum in the same-size revolver. Plus, there is less recoil with the 32 Federal Magnum. If you think the 327 Federal Magnum is ballistically the same as a 357 Magnum, then we have a bridge in Brooklyn we’d like to sell you. 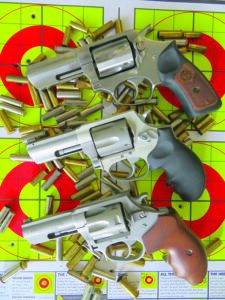 We wanted to take a look at the 32 Magnums and compare them to the 38 Special in revolvers of similar size. The three revolvers we acquired included a Ruger SP101 in 327 Federal Magnum, a Charter Arms Professional in 32 H&R Magnum, and a Taurus 856 Defender in 38 Special. In our opinion, the Charter Arms Professional offered the Webster’s dictionary definition on the advantages of the 32 Magnum: lightweight revolver with a seven-shot capacity. However, the Charter Arms falls short since the 327 Federal Magnum cannot be fired in the Professional. The Ruger SP101 showed the most versatility since it is capable of firing the 32 S&W Long, 32 H&R Magnum, and the 327 Federal Magnum, and has a six-round capacity. But, like other SP101s, it is built like a tank and is as heavy as one. The Taurus Defender is an ultralight model chambered in 38 Special with a six-shot capacity. The Taurus had us scratching our heads: Tell us again, why were the 32 Magnums developed when we have perfectly good 38 Special loads and lightweight six-shot revolvers? Perhaps one reason was we found 32-caliber ammo on our dealer’s shelves when there was no 38 Special or 357 Magnum to be had. It pays to have diversity in your 401k as well as in your defense-gun calibers.

The Charter Arms, Ruger, and Taurus are all compact, double-action-to-single-action revolvers with barrel lengths of 3 inches, with full underlugs and fixed sights. The Taurus and Charter Arms had the best front sights of the three revolvers tested. Rear sights on all consisted of a fixed gutter milled out of the top strap. A gripe across all these revolvers was the heavy double-action (DA) trigger pull. We couldn’t measure the exact DA trigger pull on the Charter Arms and Taurus since our Lyman digital scales tops out more than 12 pounds, which is too much. We could measure the DA pull on the Ruger, and it was marginally better and substantially smoother.

For the Charter Arms and Ruger, we used two 32 S&W Long loads; one from Fiocchi with a 97-grain full-metal-jacket bullet and a 100-grain flat-nose lead (FNL) from Sellier & Bellot. Moving up the power ladder, we tried two 32 H&R Magnum loads, one from Hornady Critical Defense, which used an 80-grain FTX bullet, and one from Buffalo Bore, which used a 100-grain JHP. The Buffalo Bore load was a 32 H&R Magnum +P load. When we got to the 327 Federal Magnum, the Charter Arms got off the bus, and the Ruger continued on with Federal American Eagle with a 100-grain soft point and an 80-grain FTX from Hornady Critical Defense. For 38 Special loads in the Taurus, we used Speer Gold Dot 125-grain GDHP and Armscor 158-grain FMJs. We also used a 38 Special +P load from Hornady Critical Duty loaded with a 110-grain FTX bullet.

As you can imagine, we saw a range of velocities in both the 32-caliber cartridges and the 38-caliber loads. We also saw differences in point of impact when using the same aiming point. The slower-moving lower-velocity bullets grouped higher than the faster-moving higher-velocity bullets. The reason for this is the inherent design of the revolver. Revolvers have a high center bore axis from the shooter’s grip; because of this, there is more muzzle flip with revolvers. As the shot is fired, the muzzle flips up. With slower-velocity ammo, the bullet takes longer to exit the barrel, and when revolver flips up, the bullets impact higher. Use the same aim point with the faster-velocity ammo, and you will see the faster bullets’ impact at point of aim. The same physics apply, except the bullets from the faster ammo travel quicker through the barrel as the muzzle is just beginning to flip up, so bullets print to point of aim. The rule of thumb with revolver loads is to aim low with slower-velocity ammo when the revolver is sighted in for magnum faster-velocity ammo. Depending on the load, we saw as much as 4 to 6 inches difference in point of impact between slow and fast ammo.

Looking at the 327 Federal Magnum, the game really changed. American Eagle rounds with 100-grain bullets, compared to the Hornady Critical Defense 38 Special +P with a 110-grain bullet, the 327 sizzled along nearly 400 fps faster. The Hornady Critical Defense in 327 Federal Magnum was loaded with an 80-grain FTX bullet and had a muzzle velocity of 1334 fps. Another fast, hot load. There was a notable increase in recoil, but the heavy Ruger with the rubber grip slurped it up and made it very tolerable. Looking back at data from 357 Magnum tests with revolvers with 2- to 3-inch barrels, we discovered the 357 Magnum was pushing heavier bullets at slightly less velocity than the 327 Federal Mag. In fact, the 327 Federal Magnum acts a lot more like a 9mm +P, and that is serious velocity and energy. So we can safely say the 327 Federal Magnum does give the 357 Magnum a run for its money and acts a lot like a 9mm +P, and it does it with less felt recoil in small, compact revolvers. As you can see, we started to warm up to the 32 Magnums.

(Remember to clean these revolvers often because carbon and lead — depending on the bullet type— from shorter 32 S&W Long cartridges can cause the long magnum case to bind in the chambers.)

We tested for bench accuracy at targets set at 15 yards and fired SA mode to squeeze out the best groups. Our targets were Trouble Shooter 4- and 6-inch bullseyes from Thompson Target. These targets offer advice on why bullets are grouping in certain places on the target due to shooter error. We also fired for speed at 15 yards and at 25 yards, bouncing pine cones in front of the dirt berm. Once we got our dope on where the ammo would impact, we had some low-recoil fun with the 32s and the 38. We won’t be trading in our 357 Mags, but we did appreciate the 32 revolvers and found a new 38 to like. Here’s what else we found.

The 856 Defender Ultra-Lite is based on Taurus’s small-frame six-shot revolver, the Model 856, except with an updated day/night front sight, 3-inch barrel, and Hogue grip. We’ve tested 856 variants in the past and found them to be quite capable revolvers. The Defender is quite capable, too. The Ultra-Lite is constructed with a lightweight aluminum-alloy frame and weighs only 17.3 ounces unloaded. The frame finish is a matte aluminum, while the barrel and cylinder are matte stainless steel. The trigger, cylinder catch, and hammer have a matte-chrome finish. The nicely fitted rubber finger-groove grip is courtesy of Hogue. We think this is a sharp-looking compact revolver. 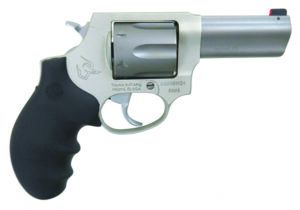 In hand, the 856 Ultra-Lite is light, the grip affords a high grasp, and it feels small, yet fills the hand with slight palm swells. Just enough grip for an average-size-hand shooter to get all fingers on the grip without having to curl a small finger under the grip.

The front sight is an AmeriGlo H3 FJ day/night sight, and it is pinned into the barrel. We like this sight over the ramp front sights pinned into the 856 2-inch-barrel models. This sight offers a fluorescent-orange rectangle with a center dot. The dot glows at night. These are not target sights, but they are an excellent defense sight to get on target fast at close range. The rear sight is a groove milled into the top strap. The notch offers just enough room to align the front sight. We would have liked a smidge larger notch to fit the front sight. We thought the sights were good. We used the bottom edge of the front sight, as well as rested the dot in the bottom of the notch, to see if different aiming points could be used with different velocity ammo. We stuck with the bottom edge of the orange rectangle and just aimed lower with lower velocity ammo.

The small square pad on the hammer spur is checkered and offers a good grip when thumbing back the hammer. The trigger is as wide as the trigger guard and smooth. The DA trigger was 12+ pounds, but it felt lighter due to the trigger shape and grip. There was some stacking taking place upon trigger press, but it was manageable. The SA pull was heavy, too, at 7 pounds, but was crisp without any creep. The Defender Ultra-Lite uses an internal transfer-bar safety system.

The best five-shot group measured 1.14 inches with Hornady Critical Defense +P ammo loaded a 110-grain FTX bullet. With the Speer Gold Dot 125-grain GDHP and the Armscor 158-grain FMJ, our best groups were 1.27 inches and 1.60 inches, respectively. On average, this was a good-shooting revolver. The barrel was also well regulated for windage, so it shot to point of aim.

Recoil was mild for a lightweight revolver, though we did notice the difference in recoil with the +P ammo. Still tolerable. For speed shooting, the Taurus was forgiving. We had no issues short-stroking the trigger. The ejector does not fully push empty cases from the cylinder, so use a gravity assist to quickly unload.

Our Team Said: The 856 Defender Ultra-Lite is lightweight, has a good front sight, good balance, and offers a six-round capacity. Who needs a 32 Magnum revolver, when this revolver uses 38 Special ammo as well as +P varieties? The price is also the lowest of the three revolvers tested. We’d definitely opt for this Ultra-Lite model if we wanted an everyday-carry wheelgun.

To collect accuracy data for all rounds, we fired five-shot groups from a bench using a rest. Distance: 15 yards. We recorded velocities using a ProChrono digital chronograph set 10 feet from the muzzle.